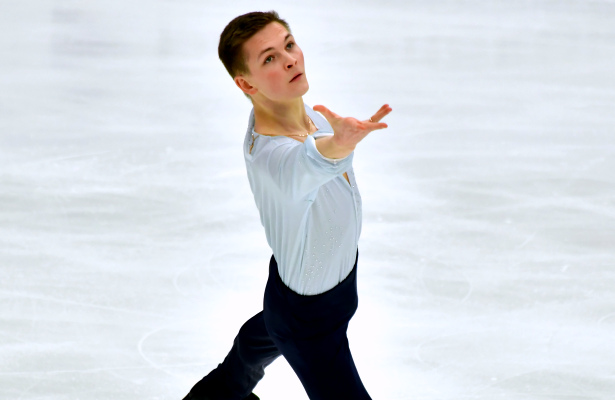 Mikhail Kolyada of Russia performs his Free Skate at 2020 Rostelecom Cup in Moscow.

Russia’s Mikhail Kolyada rebounded in the Men’s Free Skate to claim the gold in Moscow at the 2020 Rostelecom Cup on Saturday. Morisi Kvitelashvili of Georgia took his second silver medal at this event, while Grand Prix new-comer Petr Gumennik of Russia earned the bronze.

Kolyada, who stood in third after the short program, landed a quad toe-triple toe and solo quad toe—both of which received positive grades of execution (GOE), and four more clean triple jumps in his routine to “Nureyev” from The White Crow soundtrack. The only error came when popped his first triple Axel, but he landed two others in the latter half of his program. The 2018 World bronze medalist earned level 4 on two of his spins and footwork, and scored 188.55 points to finish first in the free skate and overall (281.89).

“Coming back is always hard,” said the 25-year-old. “It was hard this time, but also nice. I want to thank everyone for their support.”

When asked about his free skate, Kolyada said: “I knew basically everything about (Rudolf) Nureyev. When I visited the ballet museum and met (Russian-Georgian ballet dancer) Nikolai Maximovitch Tsiskaridze, he told me about Nureyev’s life, some stories, and showed me the costumes. So I know what I am skating. However, I have my own idea of the program that I want to bring across to the audience.”

Kvitelashvili was on par in his “Tosca” routine in the first half, landing a quad Salchow-triple toe, triple Axel, quad toe-double toe, and triple loop. However, the 25-year-old fell on a quad toe and then under-rotated a jump in his triple flip-Euler-triple Salchow combination. Nevertheless, the 25-year-old earned 176.24 points, and with a total score of 275.80, hung onto the second spot on the podium.

“I am happy how everything came together, even though not everything worked in the free skating,” said the 2020 European bronze medalist. “I skated much better in the Short Program. I want to continue to work to improve and to achieve better results in the next competitions.”

Gumennik finished sixth in the free skate (172.21), but held onto third overall (268.47) in his Grand Prix debut. The 2020 World Junior bronze medalist landed a quad Salchow-double toe-double loop and two triple Axels, but fell on an under-rotated quad Salchow in his routine to music from The Phantom Of the Opera. In all, he landed seven triple jumps and also received a level 4 on his footwork and his change combination spin.

“I am happy to have won a medal at my first (international) senior competition, but I am a bit sad that my program wasn’t that great,” the 18-year-old said. “But I am not too upset about it and I’m sure I will not repeat these mistakes as I have been consistent in practice.”

In his Grand Prix debut, Russia’s Andrei Mozalev popped his opening flip to a double, but landed a quad toe-double toe, quad toe, and six triple jumps. The 2020 World Junior champion also earned a level 4 on all spins and footwork, placing second in the Free Skate to “The Man With The Harmonica” by Ennio Morricone with 180.68 points. With a total score of 266.69, he finished rose from sixth to fourth overall.

Teammate Evgeni Semenenko, who is making his Grand Prix debut, put out a good routine which featured a quad toe, quad Salchow, and seven triple jumps. The only mistake came on a bobble on the combination sit spin which was graded a level 2. He scored 177.36 points for his program to music from the Notre Dame de Paris soundtrack, placing third in the free skate and sixth overall (260.78).

Dmitri Aliev under-rotated his opening quad Lutz, turned out the landing of a triple Axel, and put a foot down on the last jump of a triple flip-Euler-triple Salchow, but was otherwise clean in his routine to “L’immensità” by Il Volo. The 2020 European champion finished fifth (175.49) in the free skate and overall (265.11)

Makar Ignatov landed three quad jumps, but the the overall levels and grades of execution on his elements didn’t quite match those of the top skaters. He finished with 168.96 points and placed seventh overall (260.78).