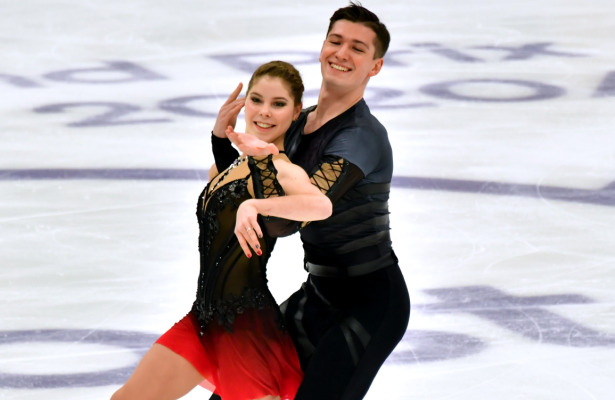 Russia’s Anastasia Mishina and Aleksandr Galliamov have a slight lead over teammates  Aleksandra Boikova and Dmitrii Kozlovskii after the Short Program took place on Friday at 2020 Rostelecom Cup in Moscow. Apollinariia Panfilova and Dmitry Rylov, who are making their Grand Prix debut, are currently in third.

Mishina and Galliamov showed a nice level 4 triple twist and throw triple Lutz in their program to variations on the La Esmeralda. She stepped out of the side-by-side triple Salchows, but the 2019 World Junior champions earned a level 4 on all other elements, along with many positive grades of execution (GOEs) for a score of 79.34.

“We made some mistakes that should not happen,” Mishina said. “Maybe we were not completely recovered from Kazan (the competition a week ago).”

“We are very happy for the fans that came here to support us and wanted to give them something to enjoy,” Galliamov added. “We skated for them.”

Boikova and Kozlovskii had the highest program component scores of the group after their routine to music from The Captivating Star of Happiness soundtrack. While she turned out the landing on a throw triple flip, the 2020 European champions otherwise landed solid side-by-side triple Salchows, a level 4 triple twist, and showed good level 4 footwork and spins. They scored 78.29 points.

“It was a nice feeling to compete with the top teams from our country,” Kozlovskii said. “We liked our performance and while maybe not everything was perfect, we feel that the interpretation and presentation was at a very high level.”

Panfilova and Rylov scored 73.84 points after their performance to music from the Joker soundtrack. The 2020 World Junior champions had a synch problem on their change combination spin, but were otherwise clean. They produced a level 3 triple twist, side-by-side double Axels, and a throw triple flip.

“We are quite pleased with today’s performance as it was our first time out this season,” Panfilova said. “We missed a lot of practice and competitions. We had some problems with the levels of some elements, but this is something that we can fix.”

What are your thoughts on the Pairs’ Short Program? Discuss @ GS Forums.