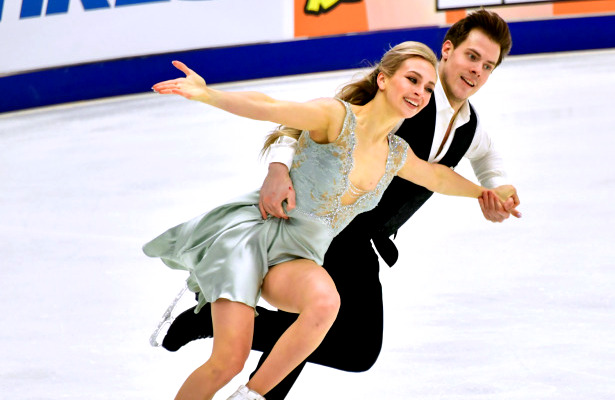 Victoria Sinitsina and Nikita Katsalapov of Russia perform their Rhythm Dance at 2020 Rostelecom Cup on Friday in Moscow.

Russia’s Victoria Sinitsina and Nikita Katsalapov are currently in a six-point lead after the Rhythm Dance took place in Moscow at 2020 Rostelecom Cup. Teammates Tiffani Zagorski and Jonathan Guerreiro and Anastasia Skoptcova and Kirill Aleshin are currently in second and third, respectively.

Performing to “Singin’ in the Rain,” Sinitsina and Katsalapov showed superb level 4 twizzles which mostly earned 5+ grades of execution (GOE) across the board. The rotational lift, midline steps, and pattern steps were graded a level 4, as were the Finnsteps in which they met all four keypoints. The 2019 World silver medalists earned a score of 91.13 points.

“It felt great!” Katsalapov said. “We love competing and we missed it. We had some health problems and we did not skate for a long time and we were not able to finish the free dance in our last competition.”

Sinitsina added: “When we heard that we were keeping the Rhythm Dance, I was at first a bit sad, because I do not like to skate a program for such a long time. But I realized that we do not tire of the music and love the program, so we still enjoy to skate it and hopefully the audience does as well.”

Zagorski and Guerreiro put out a solid and entertaining routine to music from the The Greatest Showman, displaying level 4 twizzles, pattern dance steps, rotational lift, and Finnsteps (all key points were met). The 2018 Olympians scored 84.46 points.

“I think we really enjoyed our performance,” Guerreiro told the post-event press conference. “After taking part in the test skates and the Sochi (Russian Cup) events, we felt quite confident. Obviously, as the season is progressing, it has its challenges between people sometimes being sick and the whole pandemic. Today, our main goal was to do exactly the same thing (as in Sochi), but to be more present.”

“We wanted to improve on what we’ve already done and correct the small mistakes and show what we can do in practice in the competition,” said Zagorski. “Today we felt pretty confident we did a good job.”

“I think from the artistic point of view from what we wanted to bring, was just a more confident performance all the way to the end,” Guerreiro added. “That’s what made us so ecstatic and happy at the end. We felt that positive vibe coming out of us and we think the audience felt it too. While it was a limited crowd, we felt the support and we felt them present.”

Skoptcova and Aleshin earned 79.75 points after their engaging “Bonnie and Clyde” routine. The 2018 World Junior championships earned a level four on the twizzles, straight line lift, pattern steps, and the Finnsteps (all keypoints met).

“After Kazan (fourth stage of the national Russian Cup series) we did not have much time, but we nevertheless fixed some technical things and we are happy that we did everything today,” Skoptcova said.

Annabel Morozov and Andrei Bagin are in fourth place (76.21), followed closely by the new team of Elizaveta Khudaiberdieva and Egor Bazin (76.10).

What are your thoughts on the Rhythm Dance? Discuss @ GS Forums.