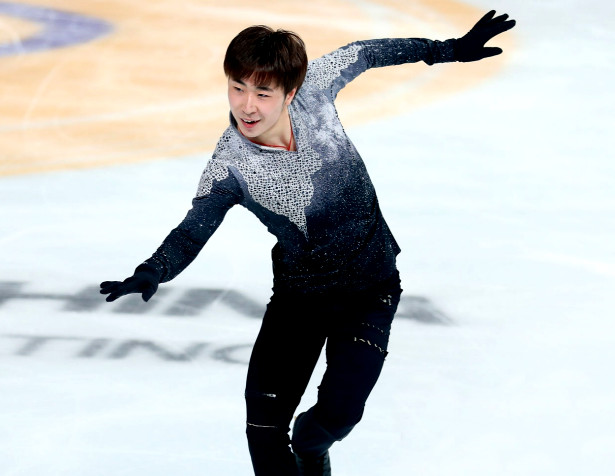 Cheng Peng and Yang Jin perform their free skate at 2020 Cup of China in Chongqing, China.

Boyang Jin defended his title at 2020 Shiseido Cup of China in in Chongqing on Saturday, winning his second consecutive gold at this event. Han Yan maintained second place for the silver, while  Yudong Chen won the bronze in his Grand Prix debut.

Jin landed a solid quad Lutz and quad toe-double toe in his routine to “House of the Rising Sun” performed by The House on Cliff. The two-time World bronze medalist put his hand down on the second quad toe and fell on the back end of a triple Lutz-triple toe, but landed two good triple Axels. All footwork and spins were graded a level 4 and he received many positive grades of execution (GOE) to score 186.95 points in the Free Skate and 290.89 overall.

“I am really pleased considering that I had only really prepared for two weeks and I had only one run-through of my program before,” Jin said. “There is still a lot to improve, jumps to add. I did like 70 percent of the program.”

“Before I used the music with quick tempo in the short program, and this is the first time I use such music in long program,” added the five-time national champion. “It’s is quite demanding physically and I think there’s still room to improve.”

Yan was near flawless in his performance to selections from La La Land. The four-time and current national champion landed a total of eight triple jumps, however, both triple flips received an edge call. Nevertheless, the opening triple Axel-triple toe garnered many +5 GOEs and he also received a level 4 on his footwork and two of his spins. He scored 172.25 points. His overall score was 264.81.

“I showed the level I have at this point,” said 24-year-old Yan. “I aimed for a calm, steady performance. The people that love figure skating are very young and maybe don’t know that I can do quads. I want to prove myself in the future and do the quad Salchow and quad toe.”

“I can’t say anything too good or bad about my skating,” added the three-time Four Continents bronze medalist. “The program is not technically very difficult, but I just enjoyed skating here and wanted to bring out a performance that the audience would enjoy as well. Maybe in the future I will add quads in my program, and to prove myself and show the audience that I still can do those jumps.”

Performing to selections from the Micmacs à tire-larigot soundtrack, Chen landed a total of seven clean triple jumps. The only errors were an under-rotated jump on the back end of a triple Lutz-triple toe and a step out on a double Axel. All spins were graded a level 4 and the 2019 Asian Open Junior champion scored 150.47 for the Free Skate and 226.21 overall in his Grand Prix debut at this event.

I feel pretty satisfied with my first time competing here in the first year of my senior year,” Chen said. “I want to get my quad Sal and quad toe consistent, and then show the audiences what I can do. I really like both of my programs. This was my first competition with the senior-level skaters and I have learned a lot.”

“I still feel regretful about my performance today as I made a few mistakes,” said Zhang. “I already made this program less difficult than before, so that’s why I feel regretful. Maybe it’s because I’m not in the competitive mode yet.”