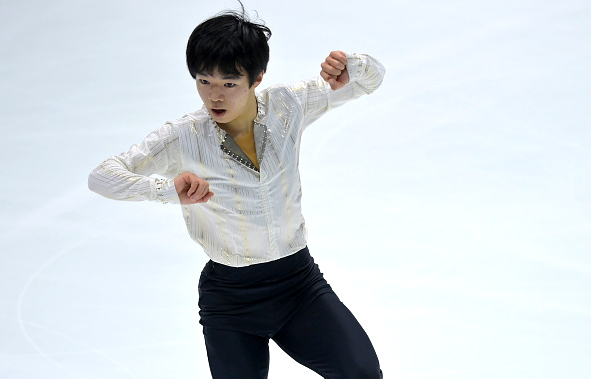 Due to the ongoing COVID-19 pandemic and travel restrictions, the ISU Grand Prix of Figure Skating events are primarily domestically run events with domestic skaters and skaters who train in the host country or respective geographical region. As a result, all the competitors in the Men’s division are from Japan.

Kagiyama landed a solid quad Salchow-triple toe followed by a quad toe in his routine to “Vocussion” by Yo-Yo Ma & The Silkroad Ensemble. The 2020 Four Continents bronze medalist also earned a level 4 on all spins and footwork, getting high grades of execution on the jumps and steps. The only error came when he popped a triple Axel in the latter of half of his routine.

“In the first half of the program I did the way I practiced and I thought I was going to have a clean performance,” said the 17-year-old. “Then I got a little tired in the second half and I popped the Axel. I hated that. Axel is not my forte and maybe I became too careful going in.”

Tomono fought for the landing of his opening quad toe (in combination with a double toe). The 22-year-old from Osaka also landed a quad Salchow and triple Axel while earning a level 4 on two spins and his footwork. He scored  83.27 points for his routine to “The Hardest Button to Button”  by Jack White.

“I think I lost speed and was a somewhat hesitant in the first half, but then I calmed myself down in the second half,” said Tomono. “I think I did well with the step sequence and the artistic impression. I felt that last season my Short Program was not at a 100 percent and I wanted to make sure to refine it. Therefore, I decided to keep it.”

Honda delivered a good triple Axel and triple Lutz, but received an edge call on the first jump in a triple flip-triple toe combination in his program to “SOS d’un terrien en détresse.” The current national junior bronze medalist also showed two level 4 spins and footwork and earned 79.22 points for his efforts.

“To be honest, I am surprised myself,” said the 18-year-old new-comer. “I would have loved to get into the second group (for the Free Skating), but I never thought I would be third! It is tough, challenging. I came back from Junior Nationals on Tuesday and on Thursday I was skating here. It is a tight schedule, but the conditioning went well.”

Keiji Tanaka is currently in fourth with 76.57 points. The 2018 Olympian stepped out of and put a hand down on the landing a of a slightly under-rotated quad Salchow and later reduced his combination to double flip-triple toe.