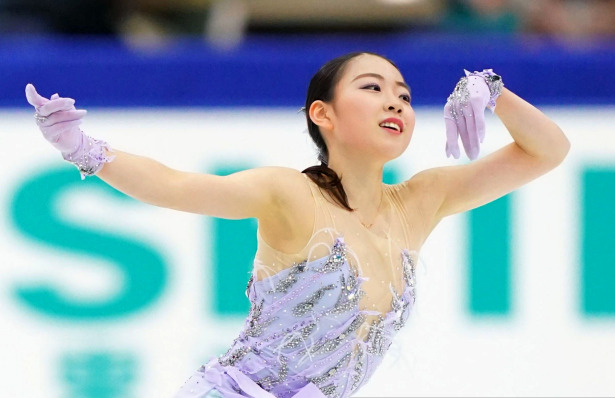 Defending champion Rika Kihira held onto to her title for a second consecutive win at the 2020-21 Japanese National Figure Skating Championships on Sunday. Kaori Sakamoto maintained second for the silver, while Satoko Miyahara moved up three spots to capture the bronze.

Kihira nailed a quad Salchow which garnered many positive grades of execution (GOE)  in the opening of her near-solid routine to “Baby,God Bless You” by Shin’ya Kiyozuka. It was the first time she has landed the jump in competition.

“I was calmer than I thought and told myself that there was no way around this jump,” said Kihira of the quad Salchow. “If I made a mistake, it would destroy the entire program, so I had to execute it well. After that, all jumps went as planned.”

The two-time Four Continents under-rotated a triple Axel, but still landed a total of  six clean triple jumps. Two spins were graded a level 4 and she earned 154.90 points for first place in the Free Skate and overall (234.24).

“During my performance, there was a little mistake and I suddenly took the opposite direction during my step sequence,” said Kihiria. “I got totally panicked because this part was from the other program. I haven’t had a mistake like that in a long time. But in the second half, I was able to catch myself, although overall I can barely remember the performance. I know I jumped the quad Salchow, but everything else is no longer present. But I got a lot of points and that was very good!”

The 18-year-old added that she program is very difficult and still isn’t perfect.

“I still have pain sometimes after my Lutz, so I know I can improve on that,” said Kihira. “I had many small mistakes and I think that I could certainly score ten points more. I will work on my condition, muscles and strength for that.”

Kihira hopes to return to Switzerland in January. She likes the rink and the environment and also enjoys the nature there.

“Stephane and the other coaches and athletes are very serious about training,” she said. “I think that’s very good because it encourages me to keep going, even if I sometimes lose motivation. There are many advantages to training in Switzerland. Of course, a Japanese training environment also has its advantages, but to get stronger, I want to go back to Switzerland and start from the beginning.”

Sakamoto delivered a good performance in her intense routine to music from The Matrix soundtrack, landing seven triple jumps, but the triple Luz received an edge call. Nevertheless, all spins were graded a level 4 as well as the footwork. All elements except for the Lutz, received many positive GOES  and the 2020 NHK Trophy champion placed second in the Free Skate (150.31) and overall (222.17).

“I had a lot of difficulties in the free skate and was very relieved to get it over with,” said the 20-year-old from Kobe. “After my short program was finished, I was completely emotionally prepared for my free skate. I wanted to make my performance as close to my ideal as possible. There were many risky parts in my program, but I was able to execute it much better than last year.”

Sakamoto admits to neglecting some of her other elements a bit while trying to master the jumps. “I definitely need to work on the smaller details.”

Miyahara, who stood in sixth after the Short Program, finished third in the Free Skate (143.27) and moved up to third overall (209.75). The four-time national champion under-rotated the last jump in a triple flip-double toe-double loop and fell on a double Axel-triple toe, but all other jumps were solid, including a triple Lutz-triple toe. All spins were graded a level 4, as well as the footwork which garnered mostly 5+ GOEs across the board in her expressive routine to “Vissi D’arte, Vissi D’amore” and “E Lucevan Le Stelle” from Tosca.

“I had mistakes in my program, but I was able to implement everything I planned to do,” said Miyahara. “The small mistakes are of course improvable, but I was able to make good experiences. “I have been working on the quality of my jumps and it has paid off. Now I want to adapt the jumps even more perfectly to the musical background.”

While the 2018 World bronze medalist doesn’t yet know where she will continue to train, the plan is to stay in Japan until mid-January. She hopes to return to Canada in the near future, but will depend on the pandemic.

Rino Matsuike landed a solid triple flip and triple Lutz-double toe in her, but received an edge call on the first jump of a triple flip-triple toe and also slightly under-rotated a triple Salchow in combination with a triple toe-double toe. The 2020 NHK Trophy bronze medalist earned a level 4 on all three spins and scored 139.17 points for fourth place in the free skate. With a total score of 204.74, the 16-year-old edged out Mihara for fourth place overall in her senior debut at this event.

Mai Mihara came in seventh (134.10) in the Free Skate, slipping off the podium to fifth overall (203.65) after her routine to “Fairy of the Forest” and “Galaxy” by Yuko Toyoda. The 2019 Four Continents bronze medalist landed six triple jumps, including a triple Lutz-triple toe, but popped a second Lutz in combination with a double toe-double loop in the second half of her program. The spins were all grade a level 4 while the footwork was a level 3.