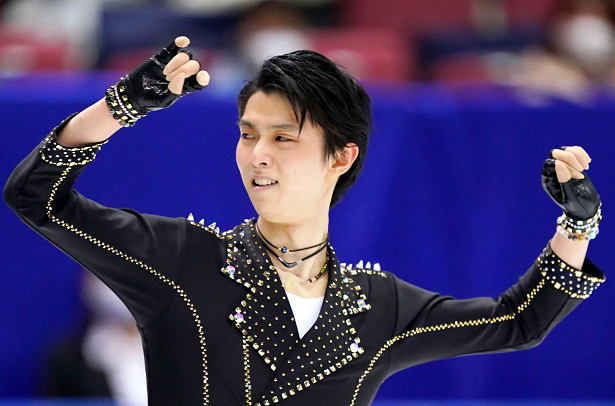 Hanyu landed all his jumps: quad Salchow, quad toe-triple toe, and triple Axel, earning many grades of execution (GOE) on all. His footwork and change foot combination spin were a level 4, but the 26-year-old did not receive credit for his change sit spin, likely due to a transitional move into the element. Nevertheless, the he finished first with 103.53 points for his new rock routine to “Let Me Entertain You” by Robbie Williams.

The two-time World champion admitted to initially looking for piano music for his new short, but decided to go with a more upbeat and engaging piece. He wanted those watching to have something uplifting during these dark times. Unfortunately, the audience was not allowed to cheer due to the virus countermeasures.

“I felt that people watching on TV and over the internet would be cheering at home, so I was able to enjoy myself,” said Hanyu.

Performing to “Vocussion,” Kagiyama reeled off a quad Salchow-double toe, quad toe, and triple Axel, all of which earned many high positive GOEs. The footwork and spins were graded a level 4 and the 2020 World Junior silver medalist received 98.60 points for his effort.

“Making a single jumping mistake means the end in the short program,” said 17-year-old Kagiyama. “I focused naturally once the music went off and enjoyed skating.”

In his tribal-themed routine to “Great Spirit,” Uno opened with a solid quad flip, but then went down on a quad toe combination attempt. The two-time world silver medalist recovered to land a solid triple Axel and was awarded a level 4 for all spins, but the footwork was a level 3.

Shun Sato landed a quad toe and triple Axel, but stepped out of a triple Lutz-triple toe for a close fifth (83.31).

What are your thoughts on the Men’s Short Program? Discuss here.