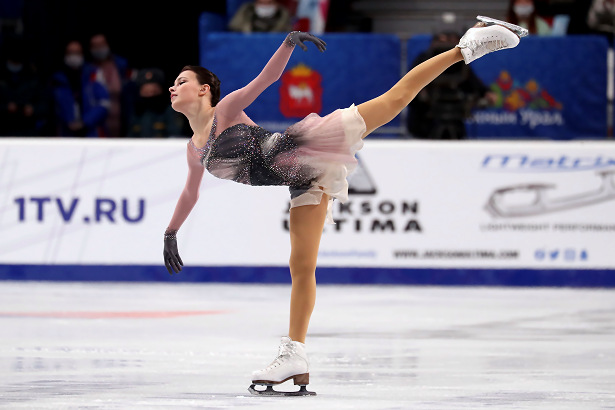 Anna Shcherbakova won an impressive battle of the quads among the Russian ladies and against illness to take her third consecutive title at the 2020-21 Russian Nationals in Chelyabinsk on Saturday. Kamila Valieva skated to the silver medal in her debut this event, while Alexandra Trusova earned the bronze, her third medal at the national senior level.

A month ago, Shcherbakova had to withdraw from Rostelecom Cup as she had come down with pneumonia and has been training with a lot less intensity since coming back on to the ice at the end of November. Nevertheless, the 16-year-old put out a perfect performance of high difficulty. She reeled off a quad Lutz, a quad flip, as well as seven triple jumps, including three triple-triple combinations, in her routine to “Morning Passages” by Philip Glass, “Home of Dark Butterflies,” and “Beethoven’s Five Secrets.” The reigning European silver medalist collected a level four for her spins and footwork to score 183.79 points.

“I am very happy!” Shcherbakova said. “This was my first run-through of the free skate for a very long time. Therefore, I threw out some transitions to make it through the program, but I am happy that everything worked out and that I justified my hopes.”

The skater revealed that her coaches had given her the option to withdraw more than once, but she was determined to compete. “And here I proved that it was not in vain,” she stated.

Valieva was stellar as well in her “Bolero” Free Skate. The World Junior champion nailed a quad toe-double toe, a solo quad toe and five clean triples. Only a triple flip was slightly underrotated. Again, she showed amazing flexibility in her spins that drew extra applause from the crowd and +5 and +4 Grade of Execution (GOE) scores from the judges. She earned 174.02 points for her program which added up to 254.01 points.

“I am very glad to have debuted at the Russian Championships and that I, for the first time in this difficult season, skated a clean long program,” the 14-year-old told the press. “I tried to be calm and not have to have any doubts and therefore it all worked out.”

Trusova nailed a quad Lutz-triple toe right out of the gate in her “Romeo and Juliet” program and followed up with another quad Lutz and five triples to pick up 170.61 points. She lost a level on two spins and the flip got an edge attention mark. The two-time World Junior Champion moved up from fourth to third place at 246.37 points.

“I don’t remember when I did two clean programs for the last time,” Trusova shared. “Of course, two quads in the long program is very little for me and I’ll try to do more, but for today, this was the maximum content that I was able to do.” She confirmed that she had an injury, but did not want to specify what the problem is.

Daria Usacheva, like Valieva, is a newcomer at senior Nationals and turned in another clean performance to Romeo and Juliet that contained seven triples jumps and was very expressive. Since she had no quad or triple Axel, she dropped from third to fourth at 230.56 points, but nevertheless it was a strong debut.

“It was a good performance, there were just some small errors on spins,” noted Usacheva, who trains with Shcherbakova and Valieva at Eteri Tutberidze’s school. “I am very glad I was able to deal with my nerves and I did everything I planned.”

As she skated last, she felt a bit nervous as she realized how well the others had been performing.

“I never saw that the girls before me, one after the other, had such high scores,” said Usacheva. “Understandably, the audience was in shock, too, and there were ovations and lots of toys – as if the event was over, but I had still to focus.”

Maiia Khromykh, another Tutberidze student, rounded up the top five with 211.91 points. She missed her opening quad toe but recovered to land seven triples.

“The toeloop didn’t work out in the free, but I think I won’t always fall on the quads,” she commented. “Therefore, I continue doing them and I’ll get there. I’ll learn new elements and will include them in my programs.”

Elizaveta Nugumanova from St. Petersburg came in sixth. She doubled a Lutz and underrotated a triple loop (204.63 points).

Elizaveta Tuktamysheva slipped from fifth to seventh after stumbling on her first triple Axel and falling on the second. The 2015 World Champion, who just had come off a Covid-19 infection, also doubled a loop and looked tired in her program (204.25 points).