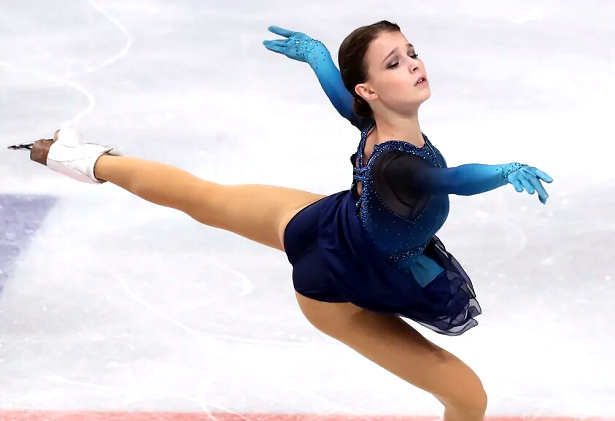 Two-time and defending champion Anna Shcherbakova edged rising star Kamila Valieva for a narrow lead in the Ladies’ Short Program at the 2020-21 Russian National Figure Skating Championships in Chelyabinsk on Friday. Daria Usacheva is sitting in third. The top three ladies are all from coach Eteri Tutberidze’s school.

Shcherbakova came down with pneumonia just before the Grand Prix Rostelecom Cup in mid-November, and since returning to the ice at the end of November, she has not yet fully trained. Nevertheless, she looked strong in her program to “Oh doux printemps d’autrefois” that featured a double Axel, triple flip, and triple Lutz-triple loop as well as two level-four spins and level-four step sequence. The 16-year-old only struggled with her flying camel spin that was rated a level two.

“I don’t want to talk too much about my illness, it is the way it is,” she said. “I am pleased with my short program. There was a mistake on the spin, but I am not thinking about it now. I am only thinking about the Free Skate.” Shcherbakova stressed that she did not want to withdraw. “I did not think about that. I want to compete therefore I will try to do the best that I can do now.”

“I am very happy to have come to Chelyabinsk, because I competed here last year at the Junior Grand Prix,” the 14-year-old said. “I go out on the ice and remember last year and I feel at home. Not everything worked out in the program. I lacked confidence going into in the Axel.”

Usacheva’s program to “One Day I’ll Fly Away” from the Moulin Rouge soundtrack included a double Axel, triple Lutz and triple flip-triple toe combination, but she stumbled briefly in her footwork. Nevertheless, the World Junior silver medalist netted 76.72 points.

“Overall, it was not bad,” said Usacheva, last year’s national junior bronze medalist. “I am glad I put together all the jumps. It was very upsetting when I slipped off the edge in the steps, but I tried to recover as well as possible.”

“In general, I am pleased with my performance,” said the 2020 European bronze medalist. “I really enjoyed skating here, the audience was very welcoming. My goal for this event is to skate two clean programs and I’ll try to meet it.”

Elizaveta Tuktamysheva, who also is still recovering from a Covid-19 infection, stepped out of her opening triple Axel but landed a triple toe-triple toe combination and a triple Lutz in her program to Spartacus. She finished fifth at 73.56 points.

Elizaveta Nugumanova turned in a clean performance to “The Bat” by Johann Strauss that included a rare triple loop-triple loop combination to place sixth (73.26 points).

“Honestly, I was nervous, because I fell very ill at the training camp in Sochi and this was my first full run-through since the camp,” the 18-year-old shared.

Maiia Khromykh, another talent from Team Tutberidze, came in seventh with a strong and clean program (72.93 points) ahead of Anastasiia Guliakova, who stepped out of her slightly underrotated triple Lutz (70.24 points).