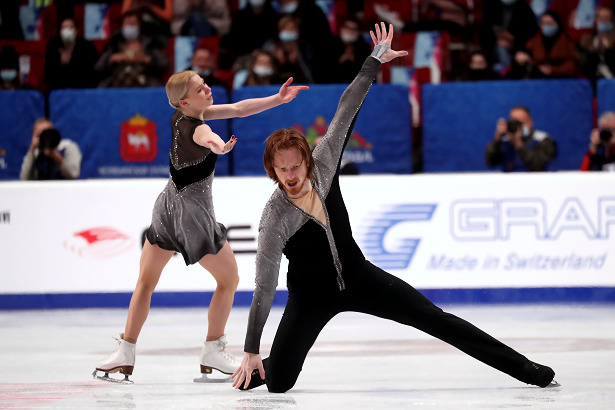 Evgenia Tarasova and Vladimir Morozov rebounded from a rough season to claim their third title at the 2020-21 Russian National Figure Skating Championships in Chelyabinsk Saturday. Defending champions Aleksandra Boikova and Dmitrii Kozlovskii settled for the silver medal this time, while Daria Pavliuchenko and Denis Khodykin repeated as bronze medalists.

Tarasova and Morozov had drawn to skate last and were off to a good start in their program to a modern arrangement of Tomasino Albinoni’s “Adagio,” nailing a somewhat shaky side-by-side triple Salchow, big triple twist, and solid triple toe-double toe-double toe combination. The two-time European Champions went on to produce a throw triple loop and excellent lifts.

However, Tarasova went down on the throw triple Salchow and they also lost a few points on the pair combination spin that was rated a level three. Everything else merited a level four. Tarasova and Morozov scored 147.58 points and accumulated 228.23 points overall. When their scores came up and they saw that they had won, the skaters and their coaches Maxim Trankov and Sergei Voronov celebrated emotionally in the Kiss & Cry full of joy and relief.

“We are very, very happy with first place. When we saw our score and our placement, we just let out all the emotions!” Tarasova commented.

“We have mixed feelings about our program, because we were doing well and then the serious mistake towards the end affected our impression of the performance,” added Morozov. “At first we were upset, but we still were happy with our performance. Then we saw the scores and the placement on the screen and our mood changed drastically. Overall, we were happy because our performance reflects the progress we’ve made.”

Performing to “Writing’s on the Wall” from the James Bond Spectre soundtrack, Boikova and Kozlovskii completed a triple Salchow – her jump was wobbly – triple toe-double toe-double toe, triple twist and difficult lifts and other pair elements that were rated a level four. However, Boikova stepped out of the throw triple flip. The reigning European Champions were almost tied with Tarasova and Morozov in the Free Skate score with 147.51 points and remained in second place at 224.99 points.

“Obviously, we wanted to win,” Kozlovskii said, “but what happened, happened. Today, we put out a good fight, we fought for each element, for each second of the program. We had no real preparation and I am proud of my partner, who, regardless of the difficult circumstances this season, was able to pull herself together and help me to pull myself together to give a good performance.”

Boikova had suffered from a cold and the team only had only a week to prepare for the championships.

Pavliuchenko and Khodykin delivered a strong program to “S.O.S. d’un terrien en détresse” that featured a side-by-side triple flip that was underrotated, a triple toe-double toe-double toe, triple twist, throw triple flip, and loop. The 2020 European bronze medalists showed a rarely seen forward-outside death spiral that received a level two and impressed with innovative lifts. They came close to the top two teams with a Free Skate score of 144.38 points and totaled 221.39 points.

“We are very pleased with our performance, maybe not with all elements that had a few errors, but we were able to show the program as a whole and to bring across our story,” Khodykin shared. “We are happy, because this is a victory over ourselves. We were able to overcome a long period of poor long programs.”

Anastasia Mishina and Alexandr Galliamov pulled up from fifth to fourth with 211.95 points, although they struggled with the side-by-side jumps: she singled the second Salchow in their triple-triple jump combination, while he stumbled on the triple toe. They also had a problem with their back-lasso lift when he almost dropped her.

“A lot happened today, maybe the mental factor played a role,” Galliamov said. “We didn’t expect that from ourselves, of course. We tried to pull ourselves together following the Short Program. Maybe it was also a factor that I felt unwell the week before the championships.”

World Junior Champions Apollinariia Panfilova and Dmitry Rylov slipped to fifth when she missed the triple Salchow – she fell and the jump was downgraded. She also underrotated the double Axel and fell on a transition move. The team from Perm earned 207.03 points.

Karina Akopova and Nikita Rakhmanin turned in a clean performance to place seventh in their debut at Nationals (194.77 points).

What are your thoughts on the Pairs’ Free Skate? Discuss here.