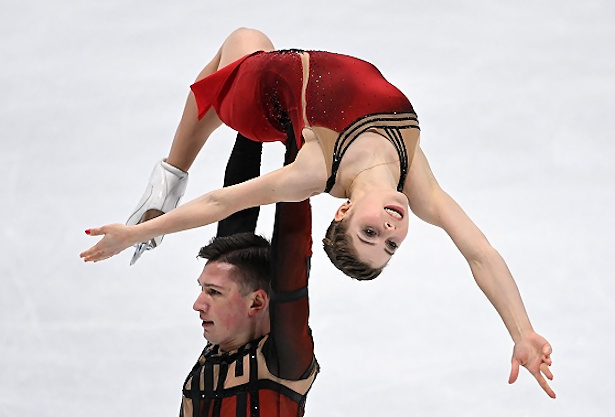 The Pairs’ event concluded on Thursday evening with the Free Skate at the 2021 ISU World Figure Skating Championships in Stockholm, Sweden, and it proved to be an exciting one. Anastasia Mishina and Alexandr Galliamov (FSR) rose to capture the gold in their debut at this event, while China’s Wenjing Sui and Cong Han maintained second overall to pocket the silver. Overnight leaders Aleksandra Boikova and Dmitrii Kozlovskii (FSR) faltered in the Free Skate, but managed to stay on the podium for the bronze.

Mishina and Galliamov gave a brilliant routine to “Bohemian Rhapsody” which featured good side-by-side triple Salchow-Euler-triple Salchows and triple toes. The 2020 Rostelecom Cup silver medalists also landed a throw triple Lutz and throw triple loop as well as earning a level four on all other elements, including the triple twist. The team racked up many high positive grades of execution (GOE) and finished first (151.80) in the free skate and rose to first overall with 227.59 points.

“We were really surprised to become first,” said Mishina. “First of all, thanks to everyone who supported us. May be we didn’t have a lot of audience on the ice, but we know a lot of people watched the translation and we felt their support. After every element, we were less nervous and it was close to the end so every element made us more happy.”

“It was a tough season,” said Galliamov. “We entered it smoothly, there were hardships and problems. The season began later than usual, we had corona and it postponed the beginning of the season, but we did not take that into a consideration and slowly, slowly we started peaking. We were talking to the foreign skaters and indeed we were discussing how many competitions we had and some were saying ‘it’s my second competition, it’s my third….’ For us, it was a bit less than 10. Some had even 11 competitions, so we were laughing as we had almost as many competitions as the usual season.

Sui and Cong were powerful but made two mistakes in their haunting and emotional routine “Rain, In Your Black Eyes” by Ezio Bosso. Sui slightly underrotated the first jump in the side-by-side triple Salchow-double toe-double toes and the last jump was underrotated. She also underrotated the solo triple Salchow while Han put a foot down on his. Nevertheless, the 2018 Olympic silver medalists showed an excellent triple twist, throw triple Salchow and throw triple flip. All elements were graded a level four and they received the highest component scores of the event, finishing second in the free skate (148.09) and overall (225.71).

“We did what we can do right now,” said Sui. “We only practiced on ice for two months after the recovery (from injury). We’re glad that we can compete at a rather good level, however, we’re not our best yet, 70%-80% of our best selves, I would say. We did think we achieved a huge accomplishment within only two months.”

“This year is our recovery year,” added Han. “We just want to make our bodies healthy so we can participate in the Winter Olympic Games.”

Boikova and Kozlovskii were off to a good start, landing very good side-by-side triple Salchows, but then Boikova took a fall on the side-by-side triple toes and later stepped out the landing of a throw triple flip. The 2020 European Champions showed a good throw triple loop in their expressive routine to “Writing’s On The Wall,” but left some GOEs on the table on their reverse lift. They still earned a level four on all elements, including a super triple twist, but finished fourth in the free skate (137.47). However, with a total score of 217.63, the Russian silver medalists were able to stay on the podium.

“We didn’t have any pressure or more motivation,” said Boikova regarding coming in to the Free Skate as the leaders. “We tried to concentrate on our work and tried to do our best, but it happened. We didn’t do our best so we were not surprised. We are happy to be third as it’s our first medal in the Worlds Championship.”

Evgenia Tarasova and Vladimir Morozov (FSR), who stood in fourth after the short program, finished third (141.30) in the free skate after their operatic routine to “Adagio.” The two-time World silver medalists had a strong start on their solid side-by-side triple Salchows and excellent triple twist, however Tarasova stepped out of the side-by-side triple toe combination and also put a hand down on a throw triple loop. She had to hang on to the landing of a throw triple Salchow, but the rest of the elements were all graded a level four with positive GOEs. With a total score of 212.76, the team maintained fourth overall.

“The last competition did not go at all as we wanted,” said Morozov. “Its’ hard to sum up the season, it is what it is. We were calm, we went there and skated almost like in the practice with no nerves. It’s the worlds and the judges are there, it was a special skate. So we were calm. Again, we made a mistake in the same element as in the short program, the rest was just another skate. All and all it was not bad.”

“All the previous skates, especially in the long program, we didn’t have any problems with the toe loop,” added Tarasova. “I guess we just wanted it too badly today. All and all we fought. We did today almost all we could except for that one element. So there it is. I really wanted it today. I had a great warm up, I was not nervous, I was calm, but… I don’t know.”

Cheng Peng and Yang Jin of China struggled at the beginning of their program when Peng doubled the triple Salchow and then fell on the triple toe combination. The 2020 Four Continents silver medalists recovered to produce a level-three triple twist, throw triple loop and throw triple Salchow. The rest of their elements were graded a level four and they placed sixth (129.86) in the free skate and fifth overall (201.18).

“First of all, I want to say that we tried our best tonight, although we made a mistake,” said Jin. “This season is very hard for every skater. I think we all very much appreciated this competition and I believe we all tried our best and we are no exception. This is a very precious experience for us.”

“We will take a little break afterwards,” he added of their future plans. “First of all, we need to find our problems and learn our lessons from this championship and  fix them for next season. The next season is very important and critical to us, so we really hope we can show our best then.”

Kirsten Moore-Towers and Michael Marinaro of Canada placed fifth (131.84) in the Free Skate and moved up five spots to fifth overall (195.29).  The two-time national champions showed a triple twist, side-by-side triple Salchow-double toe-double toes, side-by-side triple toes, and a throw triple Salchow. The only error in their nostalgic routine came when Moore-Towers touched down with her free foot on the landing of the throw triple loop.

“We have a lot of work to do and there’s no reason we can’t be competitive with those top guys so that’s the main goal over the next three or four months,” added Marinaro. “We’ll build for the big one in Beijing.”

USA’s Alexa Knierim and Brandon Frazier showed a good throw triple flip, but struggled on the rest of the jumps. Knierim stepped out of the side-by-side triple toes (he two-footed), stepped out the side-by-side triple Salchows, and then two-footed the landing of a throw triple loop. The 2020 Skate American champions finished seventh (192.10)  in the free skate and overall (192.10) in their debut at this event as a team.

“I felt like I let down the team,” said Knierim. “I made too many mistakes. I’ve never been more prepared for an event in my whole skating career. The throw loop is one of our better elements and this week it’s been off. I didn’t really feel like the Alexa that I am when I compete, and when the music started, I felt like during the whole program I was trying to find myself.”

“There were a couple of things that were a little shakier than normal, but overall, I’m happy with how we handled ourselves,” said Frazier. “It has been a long season—a lot of work for us to build and get out quickly—but I am beyond proud of our first season together. We showed a lot of fight and determination and we did a lot of good things out there.”

“Everything needs to continue to grow naturally,” he added, regarding future goals. “The skating, the elements, the technical, the performance side…We will get back and start making a list of things to do and what we want to keep striving for.”