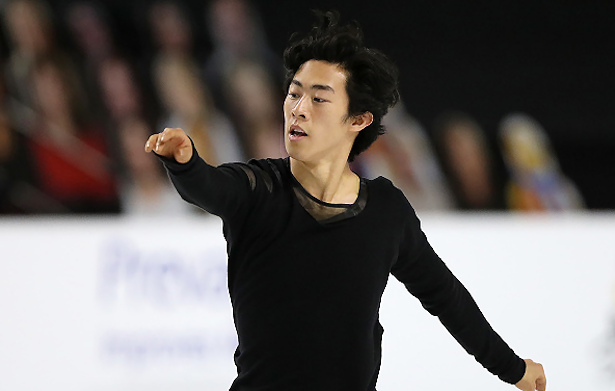 Nathan Chen performs his Free Skate at the at the 2021 Toyota U.S. Figure Skating Championships.

Nathan Chen took his fifth consecutive tile at the 2021 Toyota U.S. Figure Skating Championships in Las Vegas, Nev., on Sunday afternoon. He is the first man to win this this many consecutive U.S. national titles since Dick Button, who holds the record for seven. Vincent Zhou maintained second place to earn his third national silver medal, while Jason Brown pocketed his third bronze.

Chen stepped out of his opening quad Lutz, putting a hand down, but quickly recovered to land four more clean quads: a quad flip-triple toe, Salchow, quad toe-1Euler-triple flip, and quad toe-triple toe. The 21-year-old also landed a triple Lutz and triple Axel in his routine to music from Philip Glass, displaying level-four footwork throughout. He scored 208.36 for first in the Free Skate and overall (322.28).

“I made some mistakes, especially on the first element,” said Chen. “The rest of the program, I was thrilled I was able to stand up on my feet. Of course, I’m super thrilled with the results! I’m really happy with myself and just continuing to mirror my sentiment from yesterday that I’m so thrilled to have this opportunity to be here.”

Despite being extremely successful over the past few years, Chen doesn’t feel like he’s competing against himself.

“Anything can happen on any given day,” he pointed out. “The two guys that I’m up here with are incredible skaters. I’m sure that if I made a couple more mistakes and everyone else does exactly what they want, who knows what the results would be like? It comes down to the fact that everyone is capable of doing it, but I still want to focus on what I’m capable of doing myself and just being able to continue trying to improve on myself.”

The two-time World champion noted that winning any title is easier said then done. He thought he had a chance at the 2018 Olympics, where he finished fifth.

“Of course I would love to be able to win the next Olympics, but if that doesn’t happen, it’s not like my legacy or who I am is ultimately diminished,” said Chen. “I’m still happy with everything I’ve done. I’m proud of everything I’ve already accomplished in skating. As of now, I still would love to improve and be better. Truthfully, I’m really happy with where I am and what I’ve done. Whether or not I get that title at the Olympics is not going to define me as a person.”

Zhou opened with a strong quad Lutz-triple toe, but popped the next quad before under-rotating and falling on a quad Lutz. Nevertheless, the 2019 World bronze medalist still landed a quad Salchow and two triple Axels while earning a level four on his footwork in his routine to “Algorithm” by Muse. He finished second (183.59) in the Free Skate and overall (291.38).

“I’m grateful to have had this competition,” said Zhou. “I did a great job in the short and threw away some points in the long that would have gotten me over that 300-point margin for the first time, but you win some and you lose some. I did some great things in this competition that I can be proud of. Hopefully, if Worlds happens, I’ll be working really hard to make sure those things don’t happen again there.”

Brown finished fourth (176.00) with his free skate to Slaughter on 10th Avenue by Richard Rodgers. The 26-year-old under-rotated and fell on his opening quad toe and later popped an Axel, but delivered a total of six triple jumps along with two level-four spins. With an overall score of 276.92, he comfortably maintained third overall.

“I’m pretty pleased with how the event went,” said Brown. “I’m a bit disappointed in today as I had high expectations of myself. What I was hoping for, I came up a little short on that. That being said, it’s just incredible to be able to have an event to compete at. Everyone here in Vegas did such an incredible job in a safe and well-run event.”

It took Brown a bit of time to warm up to his long program, which was a vision of Traci Wilson and David Wilson.

“Honestly, I wasn’t taken away by it at first,” he revealed. “But slowly, as we started creating a story, it really began to grow on me. So I really love it now. We’ve had seven months to really cultivate it and turn it into something I’m super proud of. Today, it was the first time out and I was focused on pacing the program. I think I held back a little bit at the beginning, but it’s something I’ll take with me as we hopefully move on to the next event and next year as well.”

One of Brown’s biggest nightmares was not making the Olympic team in 2018, which came to past. He won the bronze in the team event at the 2014 Olympics in his first international season.

“I was sprung into the spotlight then and then I suddenly had these big expectations of the next four years,” Brown recalled. “Suddenly, my mindset was on the 2018 Olympics and getting back on the team. I think I skated with a chip on my shoulder those four years, more out of fear than determination. I was almost afraid of losing that spot and I learned a lot from that. Now that I had that worse fear play out, I’m ok. So I’m determined to get back on the Olympic team and that’s where my head, heart and soul is right now.”

Yaroslav Paniot put out a clean program to finish third in the free skate with 183.23 points. His routine featured a quad flip, quad toe-triple toe, quad toe, and triple Axel. In all, the 23-year-old landed six clean triple jumps and earned a level four on his flying camel spin. The Ukrainian-born skater, who was 10th last year, maintained fourth place overall with 266.97 points in his second appearance at this event.