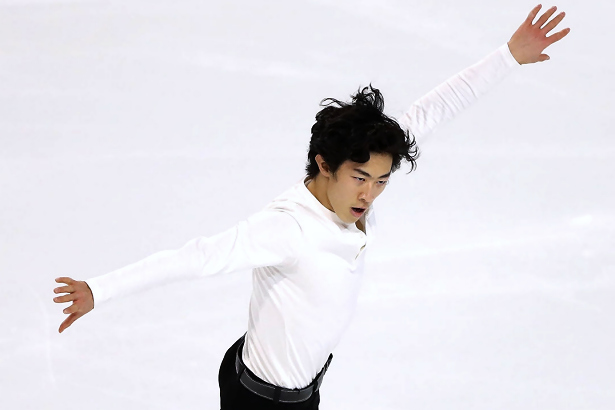 Four-time and defending champion Nathan Chen took the lead in the Men’s Short Program at the 2021 Toyota U.S. Figure Skating Championships in Las Vegas, Nev., on Saturday afternoon. Vincent Zhou is currently in second followed by Jason Brown. Combined, there are 13 senior national medals from these three skaters.

Chen put out a technically strong program to “Asturias” and “Cancion del Mariachi,” landing a quad Lutz, triple Axel and quad flip-triple toe. The tw0-time World champion earned many positive grades of executions (GOE) for all elements, and earned a level four on all three spins and footwork to score 113.92 points.

“I’m thrilled with the short program today,” said Chen. “I may have looked a little disappointed after; I made a couple of little bobbles on the landing and I wished I had skated a little bit cleaner, but overall I’m really happy. I’m thrilled to be here! This whole season has just been crazy and everything is just so unexpected. The fact that we are all here, that we are all healthy, and that we are able to do this is just incredible. I’m feeling extremely blessed to be up here with these two guys.”

Chen has five quads planned for the free skate.

“You know me,” said the 21-year-old. “I always like to challenge myself and try to one-up myself after every competition. That being said, it’s always a game-time decision for me. If things feel right, I’ll do it, and if not, I can fall back on different layouts.”

The 2020 Skate America Champion currently resides with his mother after training due to the pandemic. He finished his second semester in school and was able to take a leave of absence as the students were given two semesters off due to the pandemic.

“If that hadn’t happened, I would have had to withdraw and reapply,” said Chen. “When at school, I feel like my life is more fulfilled. Not to say that skating isn’t fulfilling—I love, love, love what I do and so happy that I get to do it every day. I just really like the aspect that everyone is there trying to find their own passion and discover who they are and you get to be a part of it. The classes are challenging and I like that since I’ve never really had that before. Bottom line, I miss socializing and meeting with people.”

Zhou was solid in his routine to “Vincent,” producing a quad Lutz, quad Salchow, and triple Axel—all of which received many high GOEs. The 2019 World bronze medalist also earned a level four on his flying camel spin and footwork, and was awarded 107.79 points for his effort.

“I’m happy with how I skated today,” said Zhou. “It’s been a long time coming. It’s pretty cool to have such a high level of competition at U.S. Nationals in the year where no one is really able to see anything coming. So it’s great to be here!”

While Brown didn’t have a quad, the 26-year-old showed difficult choreography and footwork in his routine to “Sinnerman.” The current silver medalist landed a triple flip, triple Axel, and triple Lutz-triple toe, racking up GOEs along the way with his level-four footwork and spins. He sits in third with 100.92 points.

“It felt great to skate and compete again!” said Brown. “I think for me, I kind of felt like the racehorse that was in the gate to go out onto the race track. Obviously with Worlds (last year) and Skate Canada being cancelled, I felt held back. It was a long coming! I think I was a little bit jittery, antsy, and excited out there. For the most part I’m really pleased with the way that I was able to keep getting back into my knees, keep staying relaxed and calm. I could definitely feel at times a little antsy and not quite as calm as I’d like it.”

Brown went back home and lived with his family in Chicago for four months after Worlds were cancelled last year. At the end of June, he drove back to Canada and has been there since, training.

“For the most part, we’ve been able to skate if there are five people at the rink at one time,” he said. “Fortunately, Toronto’s Cricket Skating and Curling Club club stayed open with limited ice and restrictions. Besides that, it’s been good. You skate and you go back home and try to stay safe. I did all my off-ice in the basement with zoom workouts with my trainers.”

Brown plans to go back and visit his family for a few days before returning to Canada as he hasn’t seen them in seven months.

Maxim Naumov took an edge call on the first half of a triple flip-triple toe, but the triple Axel and triple Lutz were clean. The 2020 U.S. Junior champion is in a close fifth with 83.53 points.

The Men’s event will conclude on Sunday with the Free Skate.