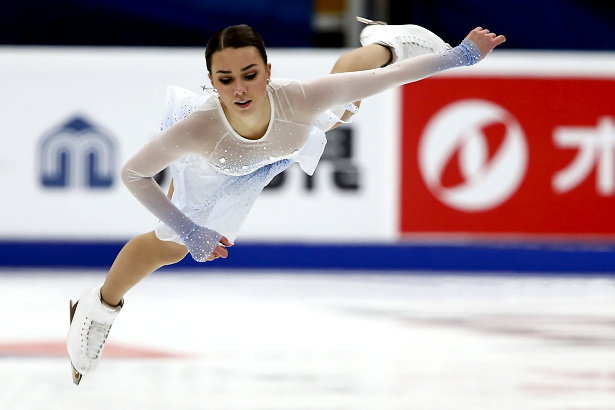 Elizaveta Nugumanova of Russia performs her free skate at the Rostelecom Cup in Moscow.

Elizaveta Nugumanova is just 18 years old, but she is nearly considered a veteran given the quick turnaround in Russian Ladies’ skating. The skater from St. Petersburg has been invited to international shows since she was about 12 and was considered a prodigy from Alexei Mishin’s school. She debuted on the Junior Grand Prix circuit in 2016-17, winning silver and bronze to qualify for the Final where she finished fifth. However, the skater soon dropped off the international radar due to the heavy field of ladies’ figure skating in Russia as well as some inconsistency in her jumps.

The athlete switched coaches after the 2017-18 season, moving from Mishin to Angelina Turenko, and then moved to Evgeni Rukavitsin in 2019. This season has been her best thus far: she came in fifth at her senior-level ISU Grand Prix debut at Rostelecom Cup in November and then sixth at Russian Nationals in December. If you take out the non-age eligible juniors, Nugumanova was the third best senior skater at nationals behind Anna Shcherbakova and Alexandra Trusova. She was even ahead of Elizaveta Tuktamysheva, who was not fully recovered from a Covid-19 infection and thus did not skate her best. However, Nugumanova’s achievements this season have not been without challenges.

“I had a hard time preparing for Nationals,” she recalled. “This season is really strange for me. At the beginning, I broke my foot and I took a long time to recover from that. I was walking on the street and just had bad luck.” At first, the skater thought she only had sprained her foot and kept skating through the pain. “It was my right foot, the worst that can happen, this is the loop, everything. I wasn’t doing the loop at all,” she said. Eventually a medical exam showed that she had suffered a fracture.

The 18-year-old recovered in time for the Grand Prix, but her preparations for Russian Nationals were hampered due to illness.

“I felt really bad during the first week of the training camp in Sochi (that started December 7),” Nugumanova recalled. “The second week I felt a bit better, but I was still weak. It is hard to train well in this condition. I felt bad during the whole camp and the preparation was like zero. Nothing worked.”

The skater was not sure if she had contracted Covid-19 but said that her mandatory test before Nationals was negative. “I am very happy that I was able to get in top shape for nationals and so happy that I gave my best and had my best result.”

Nugumanova, who is popular because of her expressive skating and beautiful spins, often has been hammered by judges for underrotations, but at Nationals this was not an issue as only one triple loop in the Free Skate was called underrotated.

“I don’t think it is just me who had these problems,” the skater noted. “Everyone has them and I don’t know why everyone is always focusing on me. If you look at the results, you can see that all girls get underrotations. I am always trying to do everything well and clean and whatever happens, happens. I think the judging is strict, but fair.”

Competing at the Grand Prix and making the top six at nationals with its deep field is an important breakthrough for Nugumanova, who tries to view it from a calm perspective.

“The Grand Prix is just another competition, but I still think it is so cool,” she said. “I was able to go to the Grand Prix at the senior level, not in juniors, and I am now on the national senior team. Nevertheless, I try to calm down and tell myself nothing has changed, I am still the same. It motivates me to go further and to train every day more and more.”

Coach Evgeni Rukavitsin has always believed in the potential of his student.

“I have been telling Lisa all the time that she has really a great gift, considering her physical abilities as well as her character,” he commented. “She can prepare emotionally for a competition the right way and give the maximum possible just at the time needed.”

However, the coach feels that he sometimes demands more from the skater during the practices before and at competitions.

“We are still adjusting to each other as an athlete and coach,” he explained. “Nevertheless, there is a dialogue. There were some difficult moments, but we overcame them thanks to Lisa who took many steps towards us. I am sure she can do even better than what she did now. I want her to open her eyes wider and realize she is capable of more.”

The competition in Russian ladies skating is insane, and as such, the chances to make the European, World or Olympic team are very slim. While many female single skaters are discouraged by this situation and might switch to Pairs, Ice Dance or retire early, Nugumanova is staying motivated.

“This is her big advantage,” said Rukavitsin. “She honestly enjoys what she is doing and she does not think ‘if I can fight only for fourth place, what is the sense of it?’. She goes out on to the ice because she wants to say something through her skating and wants to leave a trace in the soul of the spectators and in the hearts of her fans. She has many fans and they love her. She is a personality that is of interest for the audience and she brings something warm and light with her skating. This is her motivation and this is the right one.”

Nugumanova has two new programs this season, “Die Fledermaus” by Johann Strauss for the short program and music from The Mountain Between Us soundtrack including “Dusk Till Dawn” by Sia for the free skate. She selected the music herself.

“I skated to the music in short a long time ago, when I was eight or nine years old and we decided to use it again because I like it a lot,” said the skater. “I love this program! It is my favorite program ever!” The free skate music was a spontaneous decision. I really liked the music. I had been listening to it when driving and I told myself that I need to use it for the free, but It took a long time to persuade the coaches. There is a story to it, but I keep it to myself.”

Nugumanova’s next competition is the Final of the National Russian Cup series February 27 to March 2 in Moscow. This is where the last spots for the ISU World Figure Skating Championships will be decided. The Russian Figure Skating Federation announced at Nationals that they selected only the National Champions for the World team as several top skaters had missed Nationals due to illness or were not in good shape due to health problems.

Alexandra Trusova, who was third at Nationals, is not competing next weekend due to injury. According to her coach, Evgeni Plushenko, she is preparing for Worlds. Therefore, Trusova will most likely be on the team together with National Champion Anna Shcherbakova which leaves one spot open. Nugumanova will be competing against Tuktamysheva and European Champion Alena Kostornaia for this spot, but it will be very tough. Nevertheless, the skater is determined to fight.

“I hope that I can go to Worlds,” Nugumanova summed up. “I went through so much and really hope it works out and I can go.”