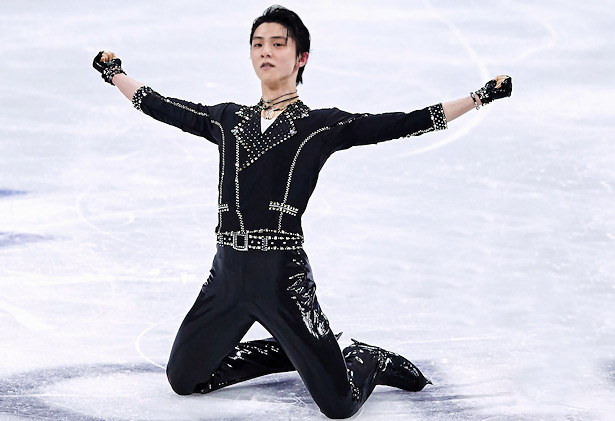 Yuzuru Hanyu of Japan took the lead in the Men’s Short Program on Thursday afternoon at the 2021 World Figure Skating Championships in Stockholm, Sweden. Teammate Yuma Kagiyama finds himself in second place in his world debut, while USA’s Nathan Chen  is currently third.

Hanyu’s “Let Me Entertain You” routine definitely lived up to it’s title. The two-time Olympic Champion appeared fresh and relaxed, landing a quad Salchow, quad toe-triple toe and triple Axel. All the spins, which  received many grades of execution (GOE), were graded a level 4 and he posted a score of 106.98.

“Mentally, I’m much more confident and I think that I can work on my program step by step,” said the 26-year-old. “I hope that I touched everyone with my program and left an impression that everyone will keep in their hearts.”

“During practice I had a hard time adjusting my jumps, but during the competition I tried not to think about it,” said the 17-year-old. “I just put everything I had in this program. I expected to be very nervous, but I was more excited to finally compete. Of course I felt a little bit nervous, but I think I improved on being mentally strong during a competition. I got 100 points and I’m very proud of that.”

Chen, who remains undefeated since winning his first World title in 2018, underrotated and took a fall on a quad Lutz, but rallied back to land a triple Axel and quad flip-triple toe. His flying camel spin was graded a level two, but all other elements received a level four. He sits in third with 98.85 points.

The 21-year-old was disappointed in his performance. “I made a big mistake right off the bat, which is, I wouldn’t say unconventional, but something that doesn’t normally happen to me. So I had to figure out how to regroup right after that, and that was not an ideal way to start off that program. But mistakes happen, and I’m glad I had, again, this opportunity to sort of learn from it and move forward.”

Mikhail Kolyada (FSR) turned out his opening quad toe (in combination with a triple toe), but then landed a solid triple Axel and triple Lutz. The 2018 World bronze medalist was also awarded a level four on all spins and footwork in his upbeat routine to “Let’s Get Loud” and scored 93.52 points for fourth place.

“I know why the mistake happened, but I won’t tell you why,” said the 26-year-old. “I decided to do the combination with the toe anyway, I can’t say why, it just came automatically. It wasn’t clean, but…my mistake today motivates me to do better in the free skating. My job is to do the quad Salchow, two quad toes and two triple Axels.”

Canada’s Keegan Messing positioned himself nicely into fifth place (93.51) after landing a strong quad toe-triple toe as well as a triple Axel and triple Lutz in his short to “Perfect” by Ed Sheeran.

“I would say my season has been very good,” said the 2020 Skate America bronze medalist. “The reason I didn’t go to (the virtual Skate Canada) Challenge was, after Skate America, my boots were completely breaking down. I had to get into something new and I wasn’t ready to do it and I took advantage of the bye that I had received to go to Nationals.”

“Coming into Worlds, I have been training very very good, and honestly, every day it feels it’s better than the last,” he added. “Especially with the baby coming. It just fills my heart with joy every single day. I hardly can stop smiling about it, I’m just so excited about the little one coming.”

Shoma Uno of Japan landed a quad flip and quad toe-double toe, but fell on a triple Axel. The 2018 Olympic silver medalist is in a close sixth with 92.62 points.

“When I re-watched my program, I think I could have landed my jump,” said the 23-year-old. “So I was very frustrated. But looking at the whole program, I had a lot of fun and it was a good performance. When I was in Switzerland I had a very good condition, but since I had a hard time. I didn’t know what went wrong. I wasn’t frustrated, I was just confused. In the six-minute training, my jumps went well.”

USA’s Jason Brown slightly underrotated a triple Axel, but landed a triple flip and triple Lutz-triple toe. The level-four footwork and spins were the highlight of his mesmerizing routine to “Sinnerman” which garnered 91.25 points for a seventh-place finish.

The 26-year-old said that having the opportunity to compete in an arena twice this season was definitely helpful coming into this event.

“I tried to keep it contained, really focused, taking it element by element because without having an audience, you don’t get that energy coming back at you the same way,” he said. “Also, because the program is so new, I don’t have that experience to know how to perform it, where to push, where not to push, how to fill out the ice in the different arenas.”

USA’s Vincent Zhou, who underrotated all jumps and fell twice, failed to qualify for the Free Skate (70.51). The 2019 World bronze medalist said he had a good six-minute warmup in which he landed a quad Lutz-triple toe and felt strong, grounded and “in the zone.”

“When the music starts, sometimes things just don’t happen the way you want them to,” said Zhou. “You can train and prepare as much as you want, physically and mentally. Sometimes it’s just not your day. Today is probably the worst day for that to happen, but life throws curveballs at you sometimes, so I’m just going to use today to grow from it and come out stronger next time.”