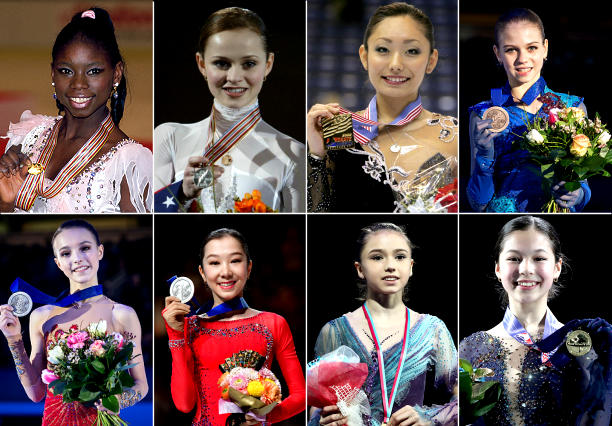 It was three-time world silver medalist Surya Bonaly of France who began attempting a quadruple jump several times in figure skating competition between 1990 and 1996. The figure skater, who had a late start in competitive the competitive field, either fell or was unable to complete the rotations.

A few years later, 2006 Olympic silver medalist Sasha Cohen of the U.S. landed a quad Salchow during her warm-up at 2001 Skate America, but then aborted the attempt during the long program. Miki Ando of Japan, a two-time World champion, became the first lady to land a quadruple jump (Salchow) of any kind in competition at the 2002–03 Junior Grand Prix Final in The Hague. While the jump was ratified by the International Skating Union (ISU), video replays show that the jump may have been under-rotated.

Russia’s Anna Shcherbakova, who broke her leg doing a triple loop in practice in the summer of 2017, landed two quad Lutzes at a domestic competition (Stage II of the Cup of Russia) the following season. She became the first lady to land a quad Lutz in a senior international competition at 2019 Lombardia Trophy.

This season, 13-year-old Sofia Akatieva of Russia landed two quad toeloops, one in combination with a double toe, at the Stage IV Cup of Russia in Kazan.

While one can find, analyze, and critique landings and edges in various videos on the internet, it doesn’t detract from the fact that ladies’ figure skating, in general, has come a very long way. Each generation brings new talent to the ice, pushing the boundaries further and further.

Which ladies do you feel have the best quad jumps? Who else has joined these ranks? Discuss “Ladies and the Quad” in the GS Forum!