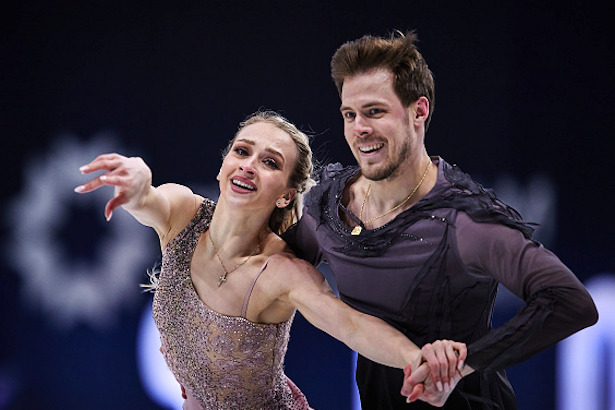 The Ice Dance event concluded on Saturday night with the Free Dance at the 2021 World Figure Skating Championships in Stockholm, Sweden. Victoria Sinitsina and Nikita Katsalapov (FSR) maintained their overnight lead to win the gold, while USA’s Madison Hubbell and Zachary Donohue and Madison Chock and Evan Bates pocketed their second world silver medal. Piper Gilles and Paul Poirier of Canada shot up from fourth place to capture the bronze in their eighth appearance at this event, edging out USA’s Madison Chock and Evan Bates.

As four-time and reigning ISU World Figure Skating Ice Dance Champions Gabriella Papadakis and Guillaume Cizeron of France sat out the Championships this year to focus on the Olympic season, the race for the title and medals in the Ice Dance event in Stockholm was open with several strong contenders aiming for the top prize.

Sinitsina and Katsalapov came into the free dance with a two-point advantage after the rhythm dance and didn’t hold back. The 2019 World silver medalists showed strong level-four twizzles and lifts. The one-foot steps were graded a level four for her and three for him, while the serpentine steps were a level three. They looked joyful throughout their routine and racked up many positive grades of execution (GOE) for the highest program component score of the event. The two-time national champions finished first in the free dance (133.02) and overall (221.17) to win the gold.

“I’m so happy I don’t know what to say right now, I just want to smile and cry!” said Sinitsina. “This is a very unique World Championships and the emotions are overwhelming. I had my eyes wet before the performance and they are still wet after. I am really grateful to Nikita for his huge support!”

“I left it all on the ice,” said Katsalapov. “I’m totally empty and it’s really amazing. If I had the emotions, I would still be screaming. This is cool! I am very proud of my partner Vika. She is a real fighter. She deserves this and I am here next to her.”

“The gold medal of European championships showed us we can fight and overcome the difficulties, trainings, competition stress,” he added. “It is very important. We get more experienced with every competition. It is not like we fly to the heaven and cannot come down. We start to work twice as hard, because we know we can do even better.”

Hubbell and Donohue delivered a moving routine “Hallelujah” which was highlighted with good edges and ice coverage. The 2019 World bronze medalists only received a level two on the circular steps and Hubbell’s twizzles were graded a level three, however, the lifts and level three one-foot steps were strong. All elements received many positive GOEs and the national champions placed third (128.66) in the free dance and second overall (214.71).

“We’re feeling a strange mixture of emotions right now,” said Hubbell. “There’s relief that this competition is over and proud of how we handled this week and the stress of international competition after a year. Our performance today felt really present and intentional—it’s really a joy to skate together when it’s like that. But there’s also that bit of dissatisfaction at not bringing home the gold medal, so right now I’m a little bit numb. In a few minutes I’m sure I’ll be bouncing off the walls with excitement.”

“We’ve thought about doing something else and we’ll have to talk about whether there’s anything else to pull out of this program,” said Donohue when asked if they would keep the free dance for next season. “For us, we feel once we’ve served the program its purpose, it’s time to move on to something else. So we’ll wait for the Team Trophy and then have the conversation.”

Gilles and Poirier mesmerized with their routine to “Both Sides Now” by Joni Mitchell, which featured good level-four twizzles and lifts. The one-foot steps were graded a level two for her and three for him, while the diagonal steps were a level three. The rotational lift looked effortless the 2020 ISU Four Continents silver medalists scored 130.98 points for second place in the free dance. With a total score of 214.35, the team moved up to second overall.

“I’m at a loss for words,” said Poirier. “This is our eighth World Championships together. We were kind of stuck between sixth and eight for a very long time—essentially since 2014. Just the pent-up frustration of so many years and being able to accomplish this feels like such a nice release. Once we’ve had time to process it as well and be home with the rest of our team—with Carol and Jon (Lane), as well as our family and friends—I think it will feel much more real. What we were able to accomplish today is the product of so many people’s efforts and we want to be able to celebrate that with them.”

Performing with their popular and captivating “Snake Dance” routine, Chock and Bates showed strong level-four lifts and level three steps, however, there was a slight break in a rotation for Bates on the twizzles which resulted in a level three for him. The 2020 Four Continents Champions finished fourth in the free dance (127.54) and overall (212.69).

“Madi was so excited when we finished,” said Bates. “She looked at me and I was like, ‘I didn’t skate as well as you did, babe.’ There were certainly a few seconds in the program where I made some technical errors that were obviously costly, and honestly I’m quite disappointed about it. But that’s kind of what we love about the sport. If it was a guaranteed thing every time that we could just show up and win the gold medal, then it would be very easy and fun. But the real pleasure, I think, comes from working really hard, getting knocked down and coming back stronger. We’ve been through a lot of those moments. I think this is one moment in particular that is quite disappointing for us, but we’re certainly going to come back next season stronger and with the same goals in mind.”

“We learned a lot about ourselves and our skating over the past month, so we’re excited to go home and start building again from where we left off,” said Chock. “We’re in a really good place and we’ve still got a lot of room to grow. We know how we want to push ourselves and we’re going to go home and do just that.”

Alexandra Stepanova and Ivan Bukin (FSR) finished fifth in the free dance and overall (125.75 / 208.77). The multiple-European medalists showed commitment in their routine to “Cry Me a River” by Justin Timberlake which featured very good level-four synchronized twizzles, as well as level three steps and level-four lifts.

“I would use the rude expression, ‘We had nothing to lose,'” said Stepanova when asked how they were able to move on after the mistake in the rhythm dance. “We made a gross mistake and as a result, finished very far from the top three. So today we decided with our coaches to skate with our hearts, to skate for each other. Not to worry and to finish this season on the highest note for us and for our team.”

“This competition was a huge lesson for us,” she added. “Not the Grand Prix, nor the Championships of  the Russian Federation. This was the main competition this season and to learn this lesson here is a huge experience. I think it will give us a big push in the future.”

Italy’s Charlene Guignard and Marco Fabbri showed good speed in their level-four twizzles as well as good transitions in their routine to music from the Atonement and “Song for the Little Sparrow.” The choreographic slide was impressive and the 2019 European bronze medalists finished sixth in the free dance and overall (124.16 / 205.20).

“We felt great skating tonight!” said Fabbri. “We didn’t know what to expect of this World Championships. We only had an opportunity to compete with no crowd and on the national events, but the competitors were not the same, the judges were not the same. So we were super happy we were able to perform well in both performances. It’s a great way to start and finish the season at the same time like this.”

“We decided to change the free dance from last year because we knew that very likely this season we will not compete much internationally and we were not satisfied with the last year’s program,” he added. “So we had time to work on the new elements, choreography and program, so why not move to the new program?  And then we said, if it’s gonna work, why not keep it for the Olympic season? So 99% we’ll keep it with some changes, upgrades and adjustments.”

Great Britain’s Lilah Fear and Lewis Gibson showed lots of ice coverage and great energy in their routine to Madonna’s “Vogue” which featured a unique and stylized level-four stationary-rotational lift. The three-time national champions also earned a level four on all lifts and finished seventh in the free dance and overall (119.50 / 196.92).

“It’s possible my sister (Sasha Fear skates with George Waddell) will have the chance to qualify for that second spot and I’m happy to give her that opportunity in any way possible so I’m excited for her too,” she added regarding the Great Britain gaining another slot for Ice Dance.

The team plans to have two new programs for next season.

Laurence Fournier-Beaudry and Nikolaj Sorensen of Canada displayed incredible transitions throughout their routine which featured a clever transition with a change of edge into their stationary lift. The national bronze medalists placed eighth in the free dance and overall (119.01 / 196.88).

“We went out and did the best we could,” said Sorensen. “At the end of the day, it’s a competition. I know I left a couple of points out there today. I can’t say I did my job 100 percent and that’s just part of the game. Maybe four-hundredths of a point is even a harder pill to swallow. You wish that sometimes it would swing in your favor, but that’s the name of the game.”