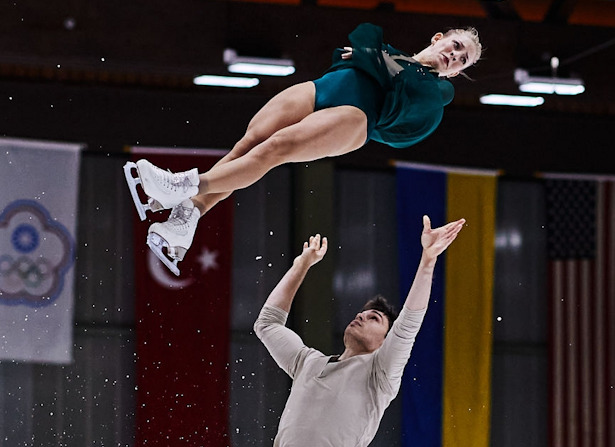 Germany’s Minerva Fabienne Hase and Nolan Seegert perform a throw triple twist in their Free Skate to “People Help The People” by Birdy at 2021 Nebelhorn Trophy in Oberstdorf, Germany.

Germany’s Minerva Fabienne Hase and Nolan Seegert claimed victory on home ice at the 2021 Nebelhorn Trophy in Oberstdorf, Germany, on Friday. The two-time national champions were not competing for an Olympic spot, but 13 out of the 16 pairs did – and only three got one. Silver medalists Laura Barquero and Marco Zandron of Spain and Georgia’s bronze medalists Karina Safina and Luka Berulava not only earned a quota spot for Beijing, but their countries will be represented in the Olympic pairs event for the very first time. The last spot went to Hailey Kops and Evgeni Krasnopolski of Israel.

Hase and Seegert stood in second following the Short Program, but were only 0.20 points behind the Georgians. The German team opened their program to “People Help the People” with a triple twist and triple toe-double toe. Seegert went down on the side-by-side triple Salchows, while Hase two-footed the throw triple and put a hand down on the throw triple Salchow. The team from Berlin scored 185.25 points.

“Just to be on the ice again after such a long time was an incredible feeling,” said Hase, who was out for months and had surgery after rupturing her syndesmosis ligament. “We did not come here to win, we just were happy to be able to skate again.”

Barquero and Zandron’s program to “Imagine” was highlighted by a triple twist, throw triple flip and loop, as well as three level four lifts. However, they struggled with their solo jumps: Barquero stepped out of the triple Salchow combo and later underrotated the triple toes. The skaters totaled 181.81 points.

“We are so happy to qualify a spot!” said Barquero. “This is the first time that Spain has qualified a pair. I am very proud of our work.” Her Italian-born partner is confident that he will receive citizenship in time for Beijing.

Safina and Berulava, who are actually still juniors, led after the Short Program as they skated with more confidence and speed than the Germans. Skating the Free to “In This Shirt” by The Irrepressibles, they completed a triple twist and side-by-side triple Salchows, however, Safina turned out the front end of a triple toe-double toe-double toe and and Berulava aborted a lift. They also lost points they almost fell during the death spiral. The team that trains in Russia still held on to the bronze medal with 178.16 points.

“Obviously we are happy to have gotten a spot, but unfortunately we did not skate clean,” Berulava noted. “We made errors. Yes, we qualified a place, but we would like to have done it in a better, nicer way.”

Annika Hocke and Robert Kunkel of Germany finished fourth (168.21 points). Their triple Salchow-double toe combination was wobbly and she fell on the throw triple loop, but they produced a good throw triple flip.

“Considering our lack of preparation we did well,” Hocke said. “We both were sick with a cold, so we only have been practicing for a week for this event, and before that, I was injured.”

Hailey Kops and Evgeni Krasnopolski of Israel grabbed the last Olympic quota by coming in fifth (167.08 points). This team has been skating together only for a few months, but they put out a decent performance that included triple throws.

The Chinese team of Yuchen Wang and Yihang Huang missed out on earning a third spot for the host country of the Olympic Games when she crashed on both throw jumps (162.69 points).