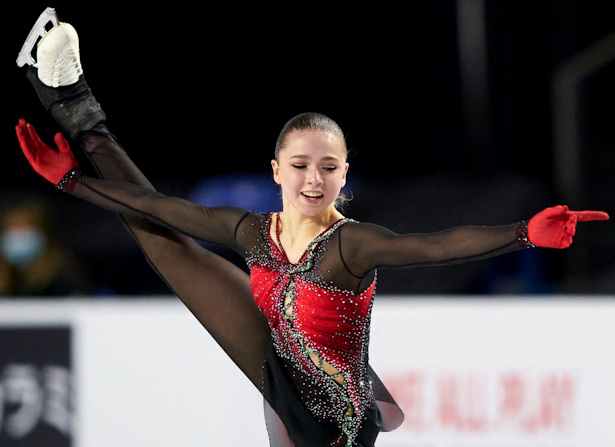 Kamila Valieva of Russia dominated the Women’s event, taking the gold at in her Grand Prix debut at 2021 Skate Canada on Saturday night. In what turned out to be a Russian sweep, teammates Elizaveta Tuktamysheva and bagged the silver and bronze, respectively.

Valieva stepped out of a triple Axel in her technically packed routine to “Bolero” but that was the only mistake. The 2020 World Junior Champion landed a solid quad Salchow, quad toe-triple toe, and quad toe-Euler-triple Salchow, reeling in hoards of positive grades of execution (GOE) along the way. She also earned a level four on all three spins and footwork and finished blasted her previous record scores free skate and total scores from 2021 Finlandia Trophy with new personal bests (180.89 / 265.08).

“I’m very happy to skate at Skate Canada and that I did my job,” said the 15-year-old from Moscow. “There were some errors, but they were real small. I did everything I planned and that was the most important to me and I will try to do even better. There is always room to grow. The triple Axel and other jumps could be better. I’m not going to add any difficult content, but just work on what I am doing now.”

Tuktamysheva nailed both her triple Axels and only slightly underrotated a triple flip in her Arabia-themed routine. In all, she landed six solid triples and also earned a level four on all spins and footwork. The 2021 World silver medalist finished second in the free skate and overall (151.64/232.88).

She added that when she first heard the music to her free skate, she fell in love with it right away. “I really enjoy it and it’s fun skating to it. This is a very important year and I hope the spectators and judges are feeling how I feel this.”

Kostornaia underrotated her triple Axel as well as on a triple Lutz and slightly on the back end of a triple flip-Euler-triple Salchow. Those were the only mistakes made by the 2020 European Champion who otherwise showed a strong triple Lutz-double toe and level-four spins. The 18-year-old from Moscow finished fourth in the free skate but maintained third overall (138.96/214.54).

“I’m glad I was also able to do a good program,” said Kostornaia, who put out two new programs in a short period of time. “I made some errors, but was pleased with my results.”

When asked how she felt about her component scores, the skater replied: “It’s not up to me to decide about the component scores. People have been trained to do that so I cannot comment on that.”

Mai Mihara of Japan rose from seventh to fourth overall, earning two new personal bests along the way (142.12 / 210.01). The three-time Four Continents medalist delivered a near-perfect skate which featured seven solid triple jumps including a triple Lutz-triple toe. All spins and footwork were graded a level four with many positive GOEs.

“I’m happy I attempted my triple Axel,” said Liu, who plans on training quads soon. “I just wanted to go for it. Hopefully in the next competition I can land it. It was really cool skating in front a crowd as it’s been a long time. The audience helped me out.”

Wakaba Higuchi of Japan finished fifth in both programs, but her total score put her sixth overall (205.27). The 2018 World silver medalist earned a new personal best for her free skate (135.86) which featured four clean triple jumps, including a triple Axel.

“I’m really happy to implement the changes my coaches made,” said the 18-year-old from Ontario of her routine to Madam Butterfly. “Everyone brings there own special take to it. I want to kind of make it my own. I want to get more speed and we are working on that and my readiness to handle an event of this caliber.”

Japan’s Mana Kawabe earned a new personal best for her free Skate to “Miracle” as well as her total score (133.22/186.52) for a ninth-place finish. The 17-year-old from Uji, Kyoto, slightly underrotated three jumps including a triple Axel.

USA’s Karen Chen made some costly mistakes, taking a fall on a triple Lutz and triple loop, and slipped from sixth to 10th overall (183.41).

“Today definitely did not go well at all,” she noted. “Practices have been solid, so it’s been tough to leave Vancouver with a program like that. I’m doing simulations, so that is helping.”

“My overall experience of my first Grand Prix has been amazing,” said Bausback. “It’s such a big difference than on the Junior Grand Prix. It’s totally different and crazy with the way they train. I can take that home and work on what I need. Not my best here, but I’m getting more experience! I’ll be focusing on my mental game.”

“It went pretty well compared to the warm up,” said Schumacher of her free skate. “I’m struggling with nerves and tightness when I feel the pressure. It was nice to know that my parents were here. I really need to work on being under pressure more.”