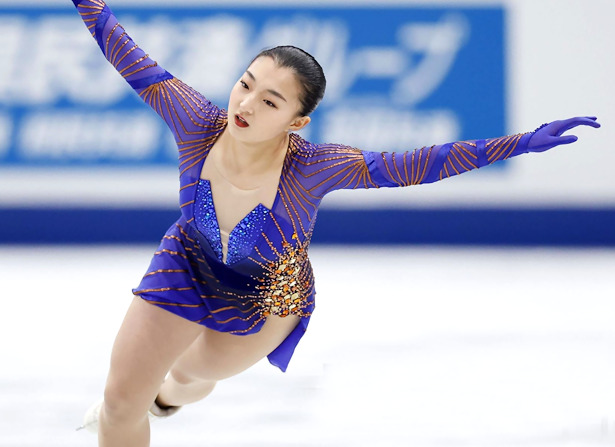 Kaori Sakamoto performs her Free Skate at the 2021-22 Japanese Nationals.

One could not have asked for a more exciting event as mere points separated the top six women after many clean Short Programs on Thursday.

Sakamoto, who gave a clean short program (79.23), delivered a near-solid performance to “No More Fight Left In Me” which featured a total of seven triple jumps, including a triple flip-triple toe. The only small mistake was an edge call on a triple Lutz, but the 21-year-old from Kobe earned a level four on all spins and footwork and garnered many high grades of execution (GOE) from the judging panel, particularly on the triple flip-triple toe and triple loop. She scored 154.83 points for her confident Free Skate and 234.06 total to maintain first place.

Higuchi stepped out of her opening triple Axel and later underrotated the back-end of a triple Lutz-triple toe. She also received an edge call on a triple flip, but landed a solid triple Lutz-triple toe and triple Salchow while displaying level-four spins through her “Lion King” routine. The 20-year-old, who has done a lot of work this season, scored 147.12 points for second place in the Free Skate and overall (221.78).

Kawabe maintained third place overall with 209.65 points. Her routine to “Miracle” featured a very good triple Axel, but she struggled a bit on other jumps. The 17-year-old stepped out of a triple Lutz and two-footed the landing of a triple flip in combination with a triple toe. Nevertheless, all spins and footwork were graded a level four.

Mai Mihara placed fifth in both the Short (73.66) and Free (133.20), but with a total score of 206.86, finished fourth overall. The 22-year-old landed six triple jumps, including a very good triple Lutz-triple toe, but left valuable points on the table after popping an Axel and underrotating the back end of a triple Lutz-triple toe-double toe. However, the judges were pleased with the level-four spins and footwork which garnered high GOEs in her routine to “Fairy of the Forest” and “Galaxy.”

Satoko Miyahara, who stood in fourth (73.76) after the Short, finished sixth (132.75) in the Free Skate and slipped to fifth overall (206.51). The 23-year-old underrotated several jumps, including a triple Salchow, triple Lutz, and the back-end of a double Axel-triple toe. Two other jumps were also slightly underrotated, but she showed very good level-four footwork and earned many high GOEs for her layback spin.

Rinka Watanabe jumped from eighth (65.07) to sixth overall (199.15) after finishing fourth in the Free Skate (134.08). The 19-year-old from Chiba qualified for the nationals by winning Eastern Sectionals earlier this season. She landed a total of eight triple jumps, including a triple Axel and triple Lutz-Euler-triple Salchow. While the skater didn’t have the GOEs the top fleet had, all spins and footwork were graded a level four.