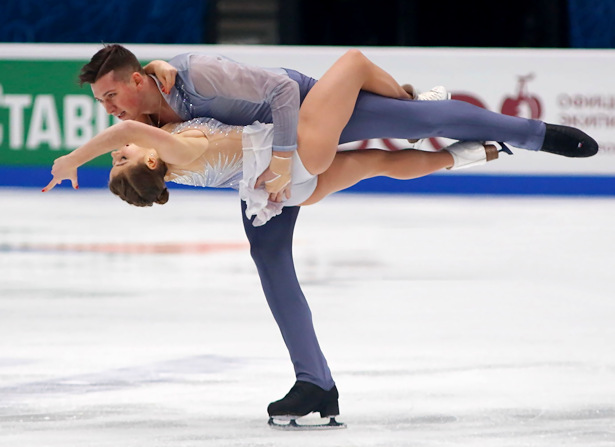 Anastasia Mishina and Aleksandr Galliamov perform to “The Snowstorm and “Time, Forward!” by Georgy Sviridov at the 2022 Russian Nationals on Saturday in St. Petersburg.

Anastasia Mishina and Aleksandr Galliamov stormed to their first title in what was an exciting Pairs competition at an incredibly high level at the 2022 Russian Nationals. Aleksandra Boikova and Dmitrii Kozlovskii claimed the silver while defending champions Evgenia Tarasova and Vladimir Morozov settled for the bronze.

Mishina and Galliamov had won the Short Program by 0.90 points over Boikova and Kozlvoskii and both couples skated clean. They put out another mesmerizing performance of their program set to “The Snowstorm” and “Time, Forward!”, reeling off a triple Salchow-Euler-triple Salchow combination, triple toe, a triple twist, throw triple flip and loop as well as level-four lifts. The reigning World Champions scored 160.00 points for their Free Skating and racked up 243.74 points overall to win their first medal at (senior) Nationals and it was gold.

“It was a good performance today,” said Mishina. “Overall,we felt it was a bit harder than the short program. We felt some pressure and we knew that the others had skated well and got a high score. We knew we had no room for errors, but everything went well.”

“Out of principle, we wanted to be on the podium here,” she added. “This is our fourth time at Nationals and we’ve never made the podium before and I didn’t make it with my previous partner either.

Boikova and Kozlovskii skated just before them and nailed all elements – the triple Salchow, triple toe-double toe-double toe, triple throws and picked up a level four for the twist, lifts, spin and death spiral as had Mishina and Galliamov. The 2020 European Champions maintained their high speed throughout and earned 157.03 points for the Free Skating. They remained in second place at 239.87 points.

“I am proud of my partner today,” Kozlovskii shared. “It was a personal victory for us after some difficulties. Russian Nationals is always a special event. The competition is crazy and the atmosphere is special. Here are the best skaters of the world and we have earned the right to represent our country at the Olympic Winter Games!”

Defending Russian Champions Tarasova and Morozov opened their program to the romantic piece “Lighthouse” by Patrick Watson with a solid triple Salchow and triple twist, but he wobbled on the triple toe combo and failed to add the last double toe while she stepped out of the throw triple loop. The two-time World silver medalists were awarded 149.52 points and totaled 228.20 to finish in third place.

“We were all fighting today,” Tarasova commented. “We had our negative and positive moments and we know about our mistakes. For us, this is another step on our way and it is important that we can take something positive out of the competition.”

Daria Pavliuchenko and Denis Khodykin turned in an intense performance to music from Black Swan that featured innovative lifts, triple throws and a triple toe-triple toe-double toe combination, although her second triple toe was underrotated. She also stumbled out of the triple Salchow. The 2020 European bronze medalists moved up from fifth to fourth at 220.18 points.

“Daria and I are pleased today, in spite of some errors,” said Khodykin. “We felt good, we showed our program that is different from others and we are enjo. We are showing a skating style that we like and the way we are seeing it.”

Iuliia Artemeva and Mikhail Nazarychev slipped from fourth to fifth after she fell on a triple toe, but the rest of their performance was strong (213.19 points).

“It was not our best, we could skate it cleaner,” said Nazarycheve. “Overall, we liked everything. The audience was great. We’ll try to skate clean in the future!”

Karina Akopova and Nikita Rakmanin debuted at Russian Nationals and drew attention with a dynamic and strong performance to Disco music to come sixth (210.77). The team trains with Fedor Klimov and Dmitri Savin in Sochi.