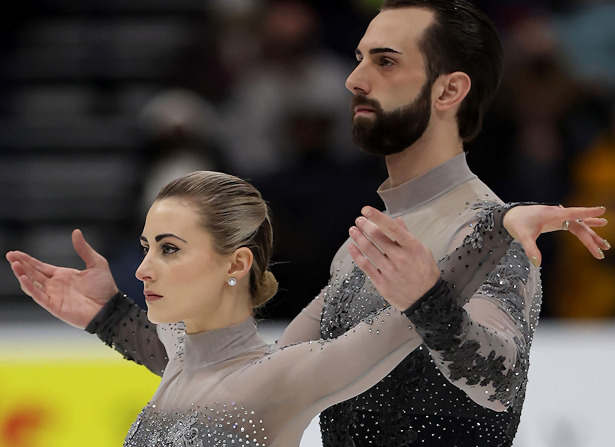 Ashley Cain-Gribble and Timothy LeDuc reclaimed the Pairs title at the 2022 Toyota U.S. Figure Skating Championships on Saturday night in Nashville, Tenn. Jessica Calalang and Brian Johnson settled for silver, while Audrey Lu and Misha Mitrofanov took the bronze. The top teams maintained their positions after the Short Program on Friday.

Cain-Gribble and LeDuc racked up tons of positive Grades of Execution (GOE) in their routine to music from the W.E. soundtrack. The only mistake came when she doubled the front-end of the side-by-side triple Salchow-double toe-double loops. The 2018 Four Continents silver medalists also landed solid triple Salchows, a throw triple flip, and throw triple Salchow while garnering a level four for the lifts and spin. The finished first in the free skate and overall (145.84 / 225.23).

“I think we are both overwhelmed with a sense of gratitude,” said LeDuc. “Everyone that’s helped us along our journey and our coaches…this is something we’ve dreamed about for a long time. We have worked so extremely hard and have visualized this so many times.”

“I’m really proud of our team and how we handled everything, this season and over the last four years,” added Cain-Gribble. “We are pretty speechless right now, because I think we were so laser-focused this whole week that we tired, exhausted, but so much relief and gratitude.”

Calalang and Johnson struggled a bit in their heartfelt free skate to “Who Wants to Live Forever,” but the level-four triple twist and lifts, as well as the throw triple Lutz, were very good and earned many positive GOEs. Calalang doubled the side-by-side triple Salchows and put a foot down on the throw triple Salchow, while Johnson stepped out of the triple toes, but the 2021 Warsaw Cup silver medalists managed to maintain second place overall after finishing second in the free skate (132.39 / 209.87).

“As you could tell, that wasn’t the performance we wanted,” admitted Calalang. “We haven’t been training exactly like that, so we were hoping to have a better long program. Just the overall week, we really wanted to take the approach to stay present, stay in the moment, because this isn’t something we thought we were really going to have. I feel like we accomplished that and took everything step-by-step. In that performance we really had to fight for each element.”

“After everything that’s happened this year, we are both just so grateful to be here in front of an audience again,” said Johnson. “It’s an experience that at the beginning of the year, we weren’t sure we were going to have again. This whole week has been just a bunch of fun. Skating with Jess is so awesome! We’re so happy to be back in front of everyone and competing!”

Skating to “Ancient Lands” by Ronan Hardiman, Lu and Mitrofanov opened with a strong triple twist, but he put a hand down and stepped out of the triple Salchow-Euler-triple Salchows while she fell on the triple toes and the throw triple loop. The throw triple flip was solid, as were the level-four lifts, and the 2021 Golden Spin Champions placed third in the free skate and overall (123.43 / 191.54).

“Today was a little bit rough for us,” admitted Mitrofanov. “I’m very proud that we were able to push through no matter what. Everyone has their off an on days, but we are definitely very happy and grateful to be here as well. It’s such a a great event and we are very grateful. Most of the season we weren’t able to be in front of an audience.”

Emily Chan and Spencer Howe finished fourth overall (115.31 / 177.25) in their second appearance at this event.

“It was an enjoyable experience,” said Howe. “We’ve been training very hard leading up to this event and you can definitely feel it running through those legs with that adrenaline. We have our elements that we need to work on and we can always be better. Our goal is to be able to touch people and showcase our skating and we did that.”

Headliners and defending champions Alexa Knierim and Brandon Frazier withdrew a day prior to the event as Frazier tested positive for COVID-19.

“It is with a heavy heart that Brandon and I announce our withdrawal from the U.S. National Championships,” Knierim posted on Instagram. “Brandon tested positive for COVID-19 despite being vaccinated, boosted and having obtained a negative PCR test prior to departure. We have taken all the necessary precautions leading up to these Championships, including but not limited to social distancing, the use of KN95 masks and canceling all holiday gatherings as well as private lessons at the rink, so it has been shocking and devastating for us to process what has happened. We have done everything in our power to prepare for this event and were ready to compete and defend our national title.”