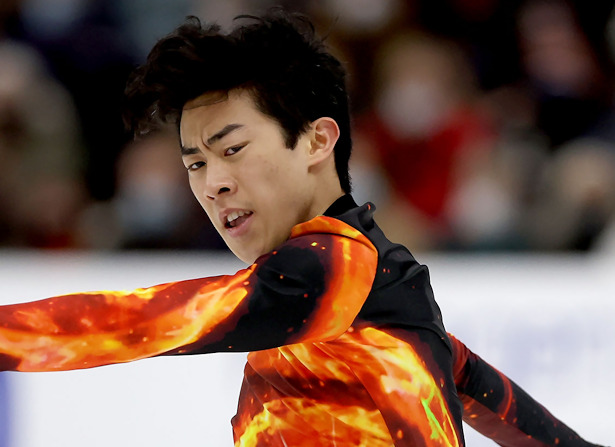 Nathan Chen seized his sixth consecutive national title at the 2022 Toyota U.S. Figure Skating Championships on Sunday in Nashville, Tenn. Ilia Malinin moved up one spot to capture the silver medal in his senior debut at this event, while Vincent Zhou slipped to third for the bronze.

Overnight leader Chen skated to his 2019-20 program “Rocketman” in which he reeled off a quad flip-triple toe, but then fell on a quad flip. He rallied back to land a quad Salchow, quad Lutz,  and quad toe-Euler-triple flip before slipping and falling on a choreographic sequence which he shrugged off.

“Silly things happen all the time,” he said later, calling his fall on the choreographic sequence a “faceplant.” “It was kind of a dumb little moment and I got wrapped up in it and I just lost my footing.”

Those were the only mistakes in another otherwise energy-driven routine which featured level four spins and footwork with high grades of execution (GOE) as well as a solid triple Axel. The three-time world champion scored 212.62 points for a first-place finish in the free skate and overall (328.01).

“Today went OK, but I made a couple of silly mistakes,” said Chen. “I had a lot of the fun and the crowd was amazing so it was great to be here at nationals and be able to perform for people.”

“I’ve had really great people in my life and in my career to help me get to where I am now,” said the 22-year-old regarding his six consecutive wins. “Raf (Rafael Arutyunyan) has been pushing me every single day since I moved to him when I was around 13. I can’t do this all by myself. I have a ways to go before the Olympics.”

Chen has yet to decide if he will use his “Rocketman” routine for the Olympics.

Malinin gave an impressive skate which featured a quad Lutz, quad toe, quad Salchow, and quad toe-Euler-triple Salchow. His routine to “Nobody Knows” and “Golden Age” also featured a triple Axel as well as two level-four spins and footwork. The only mistake was when he doubled a loop in combination with a triple Lutz, however, all jumps were clean. The 2021 Cup of Austria bronze medalist placed second in the free skate and overall (199.02/302.48).

“I’m really grateful for my skate and am surprised with how I skated, because I definitely wasn’t expecting to skate this good and especially place second,” said the 17-year-old. “I’m really glad to be here competing with these top-tier athletes and I’ve been working really hard and trying to improve everything.”

Zhou struggled a bit in his free skate, stepping out of underrotated quad Lutz, slightly underrotating a quad toe, and stepping out of quad Lutz. While he landed a quad flip and quad Salchow, the 2019 World bronze medalist took a fall on a triple Axel, but the spins and footwork were all graded a level four and earned many positive GOEs. He finished fourth in the free skate and overall (177.38 / 290.16) after his routine to Crouching Tiger, Hidden Dragon.

“I came in today wanting to skate a personal best, but I didn’t achieve my goal,” admitted Zhou. “The simplest answer is that I was just so nervous that my body froze up on me. I’m really disappointed in myself, but Nashville has been really kind to all of us athletes and I’m just really grateful to have the opportunity to compete here and have an opportunity to make the case for an Olympic team.”

Jason Brown fell on his opening quad Salchow, but landed a total of eight solid triple jumps, including two triple Axels, and displayed skillful level-four footwork in his mesmerizing routine to  Schindler’s List. Two spins were graded a level four while the change combination spin garnered a level two, however, the 2020 Four Continents silver medalist earned the highest program component score of the men and finished third in the free skate with 188.94. With a total score of 289.78, he missed the third spot on the podium by 0.38 points.

“It’s been a really tough go to get here,” said Brown, regarding his emotions at the end of the program. “Not just in the last 72 hours, but in the last four years and everything leading up to this point and me kind of turning a page after 2018. It was just a real trying time and I’m just trying to stay focused and keep grounded and focus on what I can control, so I think I finally had the moment of relief when the program was over. It was my chance to just let it go.”

“Last year was really tough for me, so this whole season was about progressing up to the U.S. championships so I’m happy to have done that,” Pulkinen said. “I know I made some mistakes here and there, but I can improve upon that. Overall, I’m really happy and looking forward to going home and working on more quads.