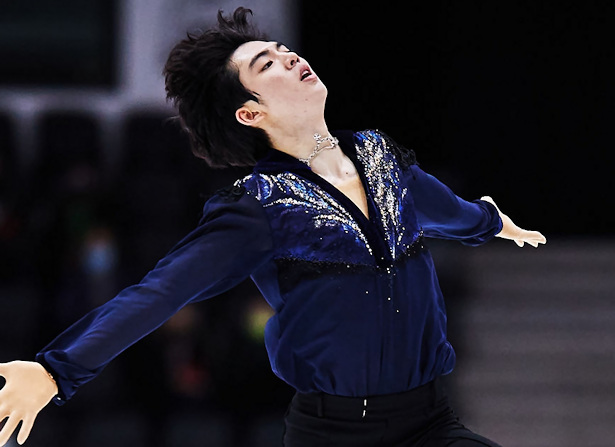 South Korea’s Junhwan Cha captured the gold in the Men’s event at the 2022 Four Continents Figure Skating Championships on Sunday in Tallinn, Estonia. Kazuki Tomono of Japan took the silver, while teammate Kao Miura earned the bronze. It was the first ISU Championship medal for all three men who took new personal best scores throughout the event.

Cha fell on his opening quad toe and later turned out the front end of a triple Axel-double toe, but landed a quad Salchow and six clean triple jumps. The 2021 NHK Trophy bronze medalist also earned a level four on all spins which were rewarded with many positive grades of execution (GOE) in his program to music from Turandot. He finished first (174.26) in the free skate and overall (273.22) to become the first male South Korean skater to win a medal at this event.

The six-time national champion was happy with what he put out, but admitted to being a bit nervous as well as disappointed with the first two jumps. However, he feels more confident going into Beijing.

“Today I feel really happy about my performance,” said Cha. “Until my program finished, I really fought through and gave my everything and did what I trained. There were little mistakes, but I am still pleased. I was happy to perform here for the audience and give my energy. When coming here, I was not thinking about medals or winning this competition, just training and just doing what I trained before. It was pretty tough to solve all the elements during my practice sessions, but finally I got the medal and I’m very satisfied with this. For me, it was another step towards the Olympics.”

Cha has many fans from all over the world, but is considered somewhat a hero in South Korea. “Thank you for the cheering of the fans online and offline,” he said. “[Also to] our team members, Korean Skating Union, and especially the organizing committee in Tallinn for making the competition succeed!”

The 20-year-old from Seoul also had some advice for up-and-coming skaters from his country: “Please be more patient. Challenge yourself and put out the effort there will be a good future for you. I hope I can be the hero or maybe mentor for them to make their future come true.”

Before taking the ice, Tomono had been feeling a bit off. While he couldn’t really put a finger on it, he described it as a “click between emotions and physical condition.”

“It’s just a slight little difference there, nothing major,” he tried to explain. “But when you think that the medal is at stake in this competition and you’re aiming for the top of the podium, it’s not some kind of experience I’ve gone through many times. I haven’t done that so many times and it’s really difficult for me. I think every skater goes through the same tension and same nervousness and it’s about how much you can put in your performance amid the same condition that we all face. You have to really face up to this tension and really take on the challenge.”

Tomono opened his routine with a quad toe-double toe, but the 2021 Rostelecom Cup bronze medalist put a hand down on the first jump and stepped out of the second in this combination. He also fell on a quad toe attempt, but otherwise landed a solid quad Salchow as well as five triple jumps in his performance to music from La La Land. Neverthless, he earned a level four on two spins with positive GOEs and finished second in the free skate and overall with new personal best scores (171.89.268.99).

“I had a few mistakes,” acknowledged the 23-year-old from Osaka. “This time I tried hard to win, but there were components that I didn’t succeed in. I think I was able to put out everything I had that I could do at this moment, and I really felt that, through this competition, I felt myself grow. Even with the mistakes, I was able to put on a good performance and round it off as I did today, so I’m very happy.”

Like Cha, Tomono also felt his result was a confidence booster moving forward and is eager to do better going into the next season.

“It’s the first time I won a medal above a bronze,” he said, regarding winning a medal in a major ISU event.” Now, through this competition especially, I feel like I really want to go even higher from where I am today and I just want to grow more as a skater.”

Teammate Miura pulled a muscle yesterday in training and was in some pain. Prior to this, the skater wasn’t even thinking about the rankings until after he finished third in the short program.

“It hurt a lot,” he said. “I had it checked out by the doctor, but he told me it wasn’t going to get worse. It made me feel a little lighter. I had a good short program, so I wanted to do a good free skate. In the second half my left foot didn’t move, but because of the adrenaline, I was able to jump the toe loop on the warm-up, which I didn’t do in training.”

Miura stepped out of a quad Salchow, but managed a quad Salchow-double toe, quad toe, and two triple Axels in his routine to music by Vicente Amigo. The Japanese Junior Champion earned a level three in two of his spins and a level two for his footwork to finish third in the free skate and overall with new personal best scores (162.70/251.07).

Miura had registered as a junior skater at the beginning of the season and had no thoughts of competing at this event. However, he felt he was doing well, especially after winning the junior title at nationals.

“I’m able to bring a medal back home, so that really makes me happy,” he said. “I think from now on, I really need to train harder so that I pay justice to my result here as a bronze medalist and I really want to improve and do better next season as well.”

Miura realizes that he needs to improve when competing with the seniors and acknowledges that the skating skills are very different.

“Kazuki and Junhwan, just watching them (do) just one stroke and it’s a nice glide,” he pointed out, nodding to the other medalists at the press conference. “Also for you two it’s normal to do the spins and steps and get the best level possible which I couldn’t do this time around. That’s something I lack and maybe this time around I can forgive myself, but next season it’s not going to be allowed, so I need to do better.”

Japan’s Sena Miyake fought for the landing of a quad Salchow-double to and quad Salchow, but received an edge call on a triple Lutz in combination with a double toe. The 2021 Japanese junior bronze medalist was otherwise clean in his skate to Swan Lake. He earned all new personal best scores at this competition, placing fourth in the free skate and and moving up one spot to fourth overall (160.35/240.02).

“In my last steps and spins, I made some mistakes, but I was able to land all jumps at the Four Continents, so I’m satisfied,” said the 19-year-old from Osaka.”Most skaters who are going to Beijing are not here, but top skaters from Asia came to compete at Four Continents, so it was a very good experience. In practicing together, I learned what I need to work on to compete on this high level.”

Kazakhstan’s Mikhail Shaidorov, who stood in eighth after the short program, placed fifth in the free skate and overall (158.71/234.67). The 17-year-old, who lives and trains in Sochi, nailed a solid quad toe-triple toe and quad toe, but later fell on a triple flip-double Axel sequence. He otherwise showed five triple jumps along with level four spins in his routine to music from  Once Upon a Time in America.

“A very good skate today!” said the two-time national champion. “In the end, I got a bit confused with the element (triple flip-double Axel sequence). I didn’t practice much and decided to jump it,  but it was a bit off.”

The skater, who won bronze at his Junior Grand Prix bronze in Poland, doesn’t often have the chance to compete.

“When I do, since it happens so seldom, somethings things don’t go as it should,” remarked the student of Alexei Urmanov. “The competitions this season went well. At senior worlds, I will try to do my best there.”

Brendan Kerry of Australia slipped from fourth to sixth overall (227.57) after placing eighth (146.45) in the free skate. The eight-time national champion landed a quad toe, but received an edge call on a triple flip and later turned out the front end of a triple Lutz-double loop and put a foot down after the loop.

“This event has been unlike the others and it was really frustrating having to try to compete for the Olympic spot I earned again, a week and a half ahead of the Olympic Games,” said the 27-year-old. “Unfortunately, that was a stressful factor, I mean, I felt really confident, but you never know what anyone can do on the day. Unfortunately, as far as this event is concerned, a lot of focus is wasted. You go out to do the best you can. Unfortunately I had it in my mind and my focus was to come here and to do a certain job.”