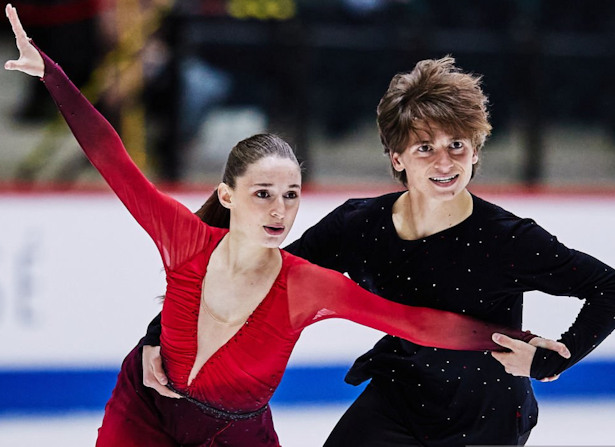 Performing to a Muse medley, Brown and Brown were confident, displaying deep edges and seamless transitions throughout to rack up many positive grades of execution (GOE) throughout. The dance spin, lifts, and twizzles were all graded a level four and the 2021 JGP Courchevel II Champions earned a level three on the one-foot steps and level two on the circular steps. They posted a new personal best of 103.27 points in the Free Dance as well as a total score of 170.25.

“It was definitely worth the wait!” said Oona Brown of the win. “Overjoyed is the correct word to describe the feeling,” said her brother, Gage. “A lot went into this season. Obviously, everyone knows it was a very long season. Yeah, I’m very happy!”

The team is already contemplating their music for next season.

“We don’t know what it’s going to be, junior or senior,” said Gage Brown. “I mean we don’t have much time to figure out what we’re going to be able to do. Our next competition, our first one, should be in June, so we don’t have that much time, but we’ll figure something out and keep everyone posted.”

All top teams were asked who they looked up to in the senior ranks and the siblings both agreed that they are inspired by Canada’s Tessa Virtue and Scott Moir as well as USA’s Madison Hubbell and Zachary Donohue.

“Especially this season,” said Gage Brown of Hubbell and Donohue. “Those two made huge changes, very good changes. I really loved their material this season.”

D’Alessandro and Waddell produced a dynamic routine to Black Swan, picking up a level four for both the lifts and dance spin, but the twizzles were graded a level three. She received a level one on the one-foot steps, while his were a level two, and the circular steps were also graded a level one. Nevertheless, the the 2021 JGP Kosice Champions earned high GOEs on all elements to score 98.56 (tied with their personal best from JGP Kosice) for the Free Dance. With a total score of 162.56, the team was able to maintain second place overall.

“We’re junior world medalists – like what?!” said an excited D’Alessandro. “We’re just so happy it doesn’t really matter the color (of the medal) at this point. This season we’ve trained so hard, so many mornings, and finishing it off on the podium at a competition like this… it still has not sunk in.”

Both ice dancers look up to Virtue and Moir, as well as Marjorie Lajoie and Zachary Lagha.

Bashynska and Beaumont gave a very strong performance to finished fifth in the Free Dance (94.19) and third overall (157.64). The 2021 JGP Cup of Austria bronze medalists opened with a combination stationary-rotational lift. While the first lift was graded a level four, the second only received a level one, but the element earned very high GOEs. The level-four twizzles and dance spin were strong, as was were the level-three diagonal steps and level-two one foot steps.

“Like Bruce (Waddell) said, it didn’t sink in yet and I feel like it will take a long time to realize that this happened and that it wasn’t just a dream,” said Bashynska of their medal.

“I think ‘overjoyed’ is an understatement,” said Beaumont. “For Nadiia and I our goal for this competition was to be in the mix for the top five, and to exceed that expectation, we’re just overjoyed.”

The team changed their original Russian folk free dance and opted to return to their 2019-20 music six weeks prior to the competition.

“I’d like to say that I am proud of my (Ukrainian) heritage and I’m proud of Peter and I to make this wise choice of music,” said Bashynska, who was born in Kiev. “We love this program and I think we were able to deliver the feeling and our love and the story to the ice today. I think what matters today is what we did and what we left out there and that was everything we’ve been feeling for the past month.”

Bashynska looks up to Piper Gilles and Paul Poirier as well as Spain’s Olivia Smart and Adrian Diaz. Her partner was inspired by the last couple of groups from the 2022 Olympics, particularly the for the Free Dance.

USA’s Katarina Wolfkostin and Jeffrey Chen, who stood in ninth after a disappointing Rhythm Dance, rebounded with their dramatic performance to “Rain, In Your Black Eyes.” The 2021 JGP Courchevel racked up many positive GOES in all elements, in particular the level-four rotational-stationary lift and level two diagonal steps. He earned a level four on the twizzles, while she received a level three, and both skaters earned a level three for the one-foot steps. They scored 100.22 for a second-place finish in the free dance, but with a total score of 157.27, missed the podium by 0.37 points.

Germany’s Darya Grimm and Michail Savitskiy finished seventh in the Free Dance with a new personal best of 92.01 after their mature performance to “Sarabande” which featured two level-four lifts, twizzles, and spin. The national junior champions scored another personal best total score of 154.48 points to finish fifth overall.

South Korea’s Hannah Lim and Ye Quan put out a fun and characteristic routine to music from Cats which featured good level-four twizzles, lifts, and dance spin. The 2021 JGP Courchevel bronze medalists finished fourth in the Free Dance with a new personal best of 95.62 points and moved up one spot to sixth overall (154.44).