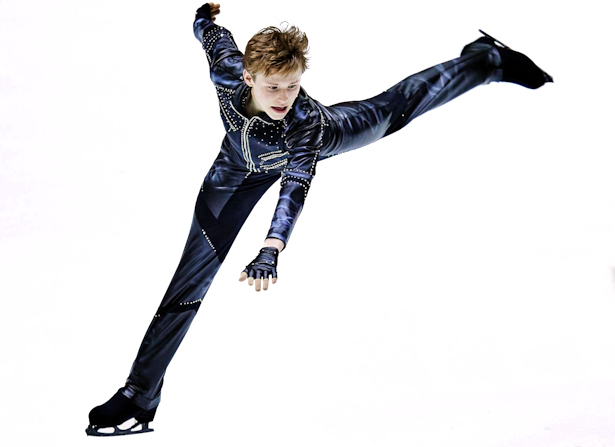 “I feel very excited that I skated the best I came here to skate,” said the 17-year-old from Virginia. “I prepared a lot for this moment to make sure I skate clean and do the best possible.”

Malinin is just coming off his debut appearance at the World Figure Skating Championships where he placed ninth.

“It’s different from the senior level, because at the senior level, I had quads in the short,” he said. “It’s a bit different, it’s kind of hard because you have to focus on not over-rotating your triples. Overall, it’s an easier layout and definitely better to work on your skating skills. You can have that shine more than the jumps.”

“Any senior event is a lot more pressure,” Malinin summed up. “It seems a lot bigger than junior events, so coming from senior Worlds to Junior Worlds, it kind of lowers the mood a bit and makes it feel a bit easier. But you still have to do the best possible, because there are a lot of other good skaters here.”

Chiu received an edge call on his opening triple flip, but the triple Axel and triple Lutz-triple toe were clean. The 2021 JGP Courchevel (II) Champion also received positive GOEs for his level-four footwork and spins, and posted a new personal best of 81.59 for his routine to “Vincent.”

“I’m very excited to be here! It was personal best for me and I have been training a long time for this moment,” said Chiu, who has been training since Canadian Nationals where he finished third. “Skate Canada actually held a camp for all of the Junior World competitors. So it was nice to go there and show my programs to some judges and get some feedback.”

Selevko stepped out of a triple Lutz-triple toe, but was otherwise clean in his quality performance to Metallica’s “Nothing Else Matters.” The triple flip and triple Axel were done with ease and the 2022 Challenge Cup silver medalist displayed level-four spins and footwork throughout to score 81.26.

“I am very happy with result,” said Selevko. “That was quite unexpected for me considering the mistakes I made in the end of the program. My brother (Aleksandr) was fourth last time when Junior Worlds was in Tallinn (2020), so we’re both happy that I got that place.”

Selevko competed at the World Figure Skating Championships in March where he finished 15th in his debut at that event. He didn’t have any quads in the short program at that event, but still felt there was a difference, especially in the free skate.

“At the junior level everything is kind of fast and you have to do the jumps and all the elements one after the other,” the 19-year-old from Tallinn explained.  “I think there is not a lot of pressure on me in the free skating. It is more in the short program because you can’t make mistakes and you have to be very precise. In the free skating it is a bit more relaxed I think. I felt a bit of a relief after senior Worlds and it made it a bit harder to get ready for Junior Worlds. At senior Worlds the pressure is higher.”

USA’s Liam Kapeikis reeled off a very good triple Axel followed by a triple Lutz-triple toe in the opening of his routine to “Man of La Mancha.” The 2022 Egna Spring Trophy bronze medalist also landed a triple flip and produced two level four spins to score a new career-best of 79.83 points for fourth place.

Tatsuya Tsuboi of Japan finished fifth with a new personal best of 79.15 after his inspiring routine to “Tree Of Life” and “Cry Freedom” by Audiomachine. The 2022 Bavarian Open Junior Champion landed a good triple Axel and triple flip, but received an edge call on the front end of a triple Lutz-triple toe. All spins were graded a level four.

Canada’s Stephen Gogolev gave a good performance to “Repeat After Me” which featured a triple Lutz-triple toe, triple Axel, and triple flip. He sits in sixth with a new season’s best of 78.75 points.

The Men’s event will conclude on Saturday with the Free Skate.