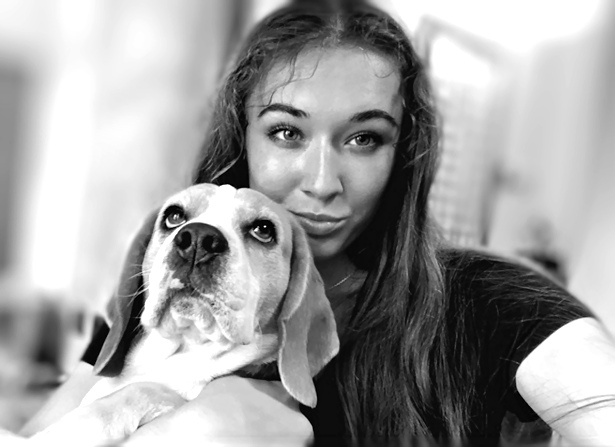 At the time of the invasion, Anastasia Gozhva was at home in Kyiv when the first explosion woke her mother and sister.

“I woke up myself two hours later from a very loud explosion,” said Gozhva. “My first reaction was shock and misunderstanding of what was happening. I started watching the news and I saw that my city of Kyiv, Kharkov, and other cities in Ukraine were being bombed.  A house was bombed on the next street from me. For me, the situation was also very frightening due to the fact that my dad was in Poltava working, and in order to get home, he had to go under fire. Luckily, he arrived unharmed.”

Gozhva stayed at her home until March 5 as Kyiv was surrounded by troops. Relatives approximately 10 kilometers away in Bucha called to say their goodbyes as Russian tanks were driving along their street.

“Fortunately, my relatives were able to get out alive, unlike my friends, who were shot by Russian soldiers in their own car,” said Gozhva. “These events did not go unnoticed in animals as my dog ​​turned gray from the explosions.”

Gozhva, along with her family, except for her father and grandmother, managed to leave by car.

“My grandmother is 85-years-old and survived WWII,” said Gozhva. “She is ill and cannot travel. Since my dad is of military age, he cannot leave the country.”

“The road was hard and scary,” the 20-year-old recalled. “One day we did not have time to arrive at the hotel before curfew and spent the night in a monastery. We are extremely grateful to these people for letting us spend the night. At that time, it was not about convenience, but about the fear of being shot in your car.”

The skater and family took refuge in Tallinn, Estonia, where she is currently training at the Tallinna Iluuisutamiskool club along with her coach, Marina Amirkhanova.

“Marina insisted that I leave Ukraine, but I did not want to at first and was afraid to do it until the very end,” said Gozhva. “Now my family and I are renting an apartment in Tallinn. I am so thankful to the skating club for their help and am using this time wisely to prepare for the new season.”

In light of the current events, she will be keeping both programs from the 2021-22 season and is confident about her triple jumps which she fells have improved and become more “stable” since last season.

“I have been working on triple-triple combinations and want to show them,” said the 20-year-old. “There will also be new rotations in line with the new rules. I am also working a lot on the slide and my presentation right now. I want to compete at major international events and hope that I can represent my country well.”

In the meantime, the 2022 Ukrainian National silver medalist is adapting to her new surroundings.

“I am not working yet as I am also finishing my third year at the university and we are now taking exams,” she offered. “At the moment, funding comes from the accumulated funds before the war, but I understand that this is not forever.  I hope the new season will be even better than the previous one, and I will be able to show my clean skates and defend the honor of my country in competitions.”

Gozhva plans to participate in upcoming Senior B and Challenger Series events this season.