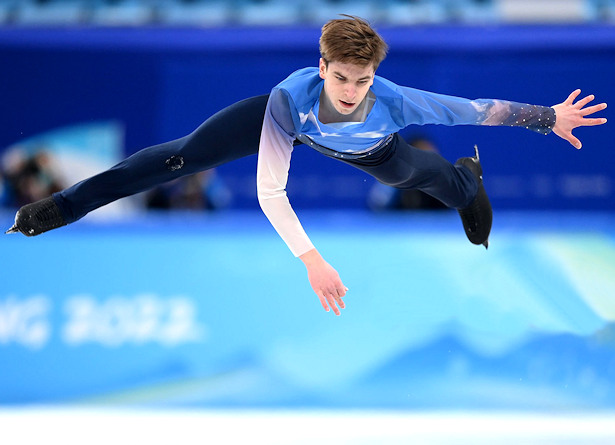 Ivan Shmuratko of Team Ukraine performs his Free Skate on day six of the Beijing 2022 Winter Olympic Games at the Capital Indoor Stadium on February 10, 2022 in Beijing, China.

Just days after returning from the 2022 Olympics, Ivan Shmuratko was at home with his family in Kyiv when the bombs started going off during the early hours of February 24th.

“We all knew there was the possibility of war, there is no denying that,” he said. “With so many troops on the border and all the news that started coming out at the end of December and beginning of January, it was hard to ignore. I think many people were just trying to stay positive and hoping that nothing would come of it. War was always in the back our minds. With so many troops surrounding the country, it was terrifying. We were hopeful, but we were also holding our breath. We just couldn’t believe that they would start a full-scale invasion. Even though we started to prepare, we just couldn’t believe it would happen in the 21st century.”

It was difficult for Shmuratko to fully embrace the spirit of the 2022 Olympic Games in February. In fact, many Ukrainian athletes could not fully focus on what they trained to do.

“The Olympic Games are supposed to be the competition of your life,” he pointed out. “All athletes train hard and this is supposed to be the pinnacle of their careers, the culmination of their hard work. Each one of us just wanted to show the best we could. But at these Games, it wasn’t about our personal success as much as it was to show our support for the people of Ukraine. It was so hard to really take it all in and enjoy the experience to it’s fullest.”

To make matters worse, the skater tested positive for COVID-19 when he entered Beijing and was not able to compete in the team event.

“Of course that was upsetting, but it was nothing compared to what my country was going through,” said Shmuratko .

Shmuratko was not able to step onto the ice again after the invasion. It wasn’t until he arrived in Montpellier, France, after a three-day journey for the 2022 World Figure Skating Championships that he could practice.

“It wasn’t about marks or technical elements for me or our team,” he said. “They were not at all the priority. It was a very important competition to show that Ukrainians are fighting and show that we are strong through our performances.”

After Worlds, Denys Strekalin—a Ukrainian-born pair skater who competes for France with Oceane Piegad—invited Shmuratko to train at Club Olympique de Corbevoue in Paris during the month of April.

“He’s a good friend of mine and I am so thankful to him, Laurent Depouilly, and the club for allowing me to use the ice with everyone,” said Shmuratko. “My best friend Andrii Kokura came later and he is still there. Denys also helped me with living accommodations and organizing everything and I’m so grateful for that!”

The skater then relocated to Oberstdorf, Germany, in May to train in Michael Huth and Robert Dierking’s group. He stays in touch with his head coach, Marina Amirkhanova, who is currently in Tallinn, Estonia. This also enables him to visit with his mother and 15-year-old brother who are now in Bavaria.

His father, who cannot leave Ukraine, does performance improvement consulting in different industries, but is also doing volunteer work on the side.

“He helped to launch a telemedicine and system of E-Health all around Ukraine which helps doctors and patients,” explained Shmuratko.

With the help of Huth and Dierking, Shmuratko is launching two new programs for the upcoming season. His short program is a tribute to his country and will be set to the Ukrainian song “Біля Тополі” by SHUMEI. The title translates to ‘Near the Poplar’ and is about a mother who waits for a son who has gone to fight for freedom. The piece is still in progress as he works on the choreography via Zoom with Oleksii Oliinyk who is in Kyiv.

“I heard this music sometime in April, and after the first words, I knew this would be it,” said Shmuratko. “I didn’t know the name at the time, but the words drew me in immediately. In the song, there are lyrics, ‘For those, who far away at sea, and on the wings of stork will return alive.’ This encompasses the story that I tell in my program. I am very excited to show this piece! The artist, Oleh Shumei, is my age, just two months younger than me. This month I came in contact with him and he’s watching the process of the creation the program.”

The music to his free skate is a compilation to: “Find Me” by Forest Blakk, “On the Nature of Daylight” by Max Richter, and “This Place was a Shelter” by Ólafur Arnalds.

“Adam Solya is doing the choreography for my free skate,” the skater shared. “The lyrics of this piece really resonate with me and what I feel inside. It’s a story of mixed memories and feelings. The song ‘Find Me’ had been on my mind for a long time, but I knew that I needed more as this piece is just spoken words. I really like the piano and violin and this added music gave me the platform I needed. It was almost like a one-day idea. My goal is to be able to translate this to the audience on the ice.”

Shmuratko shared that the coaches work as a team and that all training sessions are planned in advanced with a schedule for each one and what will be worked on.

“We get as much attention that we need,” said the skater. “I know what we are going to train on each time I come in and I really like this system! I am learning that planning is very important for the practices and that’s something that I need to work on to become a more well-rounded skater and coach in the future.”

The skater revealed that he is training a quad and said that it is a “work in progress.” He also is working to improve his transitions through elements, the quality of the step sequences, and the levels of his spins.

“It’s going to be hard to get the spins to level four due to the rule changes” he pointed out. “But rules are rules and they are challenging us as athletes. The coaches know the rules and our job is to play by the rules and work to be the best versions of ourselves. So that is the goal for this season. To do everything to deliver.”

“As for the choreography and performance, it’s an art that you work on all your life,” he stressed. “It’s work that never ends. It’s important for me to be able to make people ‘feel’ and reach them from inside.”

Shmuratko is currently preparing for his first competition of the season—the Challenger Series Nebelhorn Trophy—which is scheduled to be held in Oberstdorf, Germany, in September.