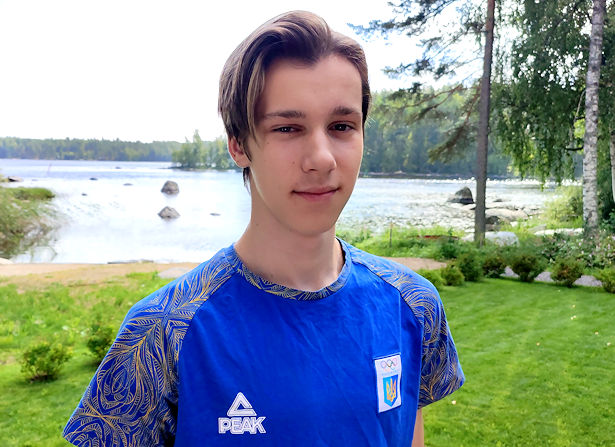 Ukraine’s Kyrylo Marsak just outside of Perunka, Finland, in August 2022.

Ukrainian National bronze medalist in figure skating, Kyrylo Marsak, was asleep at home in Kyiv when the invasion started and he woke to hear his parent loudly speaking.

“They said war had started, but I really didn’t believe them,” Marsak recalled, “because who can believe that in 2022 a war would start? But after a few minutes, another bomb was dropped near Kyiv and I was shocked! At first I panicked, but afterwards I stayed calm. After the first day, I stayed in Kyiv for three weeks and not one day went by where there were no explosions.”

“I can’t express in words exactly how the war affected me, but something in me has clearly changed,” the 17-year-old added. “In many ways, I was disappointed in the world order and due to the fact that people in the government, in particular in Russia, can influence, and, roughly speaking, ruin my life, the lives of my family, and millions of people in my country.”

After three weeks, Marsak left for Poland with his 23-year-old sister. The trip took nearly two days without any sleep. Airspace has been restricted for flights and the trip would normally have taken approximately 12 hours by car.

“We went from Kyiv to Lviv (city near the border of Poland) by train,” he said. “There were a lot of people on the train and we couldn’t sit. We stood for 12 hours in the aisle between the exit and the toilet. Once we arrived in Lviv, we had to wait about 10 more hours for a train to Poland. This was between 8PM and 6AM and we were waiting there on the platform with many other people. It was very cold and there were a lot of  dubious people. Once we were on the train, we rode for two or three hours and then stopped in the middle of a field. There was nothing there, but thank God there were volunteers who fed people and gave warm clothes so that people could warm up. We stood in this place for nearly seven hours as there were problems with the previous train and it took a very long time to check it.”

“Аfter this waiting in this place for another two hours and another stop, we reached the border of Poland,” Marsak continued. “There we also stood for more than two hours and then another 40 minutes on the road and we finally arrived at the border town of Przemysl at 9PM. We couldn’t leave until 6AM because it turned out that all trains to the city we needed to go to would only be in the morning. But at that train station we met Jason, a volunteer from the UK. We are very grateful to him as he helped us find bus tickets and took us to Krakow by car. After that, we traveled all night by bus from Krakow to Torun.”

However, Marsak’s parents are still in Kyiv and the skater also has many relatives in Kherson⁠—a city in south Ukraine—which is currently occupied by Russian forces.

“I talk to my parents by phone every day,” he said, “but in Kherson, Russian occupants turned off the connection to the Internet and it is really hard to contact relatives there.”

Prior to the attack, the skater was preparing for Junior Worlds, but the chaos and explosions caused Marsak and his family to seek shelter at all times. He had one competition prior to Junior Worlds at 2022 European Youth Olympic Festival (EYOF) in Vuokatti, Finland, where he finished in 15th place.

“After EYOF, I trained for a week to prepare for Junior Worlds” he said. “One week just was not enough and I wasn’t ready for this competition. I skated my program without a triple Axel and and fell on a spin. This was not how I am used to skating, but due to the war, I found myself in the same position as many other Ukrainian skaters and athletes. But I have one more chance on to perform at Junior Worlds this year and will show my best.”

In June, Marsak attended a training camp in Perunka, Finland, with Team Mayer-Virtanen under coach Alina Mayer-Virtanen. He still works with his main coach, Dmitry Shkidchenko, via Viber since Shkidchenko is still in Kyiv. Like many other skaters in his position, he is crowd-funding in order to raise funds to pay for his training and competitions.

“I plan to stay here to train next season,” he revealed. “I have good conditions here and there is an opportunity to prepare well for the next season. I have free ice time and I am very grateful to Valtter Virtanen and Alina Mayer-Virtanen for the opportunity and help! This is very important for me, because I am alone in Finland and cannot pay for my own training as my studies at Kiev University online will resume in September.”

This season, Adam Solya choreographed a new free skate for Marsak to music from the Star Wars soundtrack: “Across the stars”, “Imperial March (Anakin’s Suffering)” and “Duel of the Fates ” by John Williams and Samuel Kim.

“I like everything in this program,” he said . “From beginning to end, all the transitions, the arrangement of elements and movements…I think that this is my best program of all. Initially, I really was not ready to show the whole idea that I had before. Secondly, the idea to create a program for Star Wars was a long time ago, a couple of seasons ago, because I am a very big fan of Star Wars and it is the compositions from this film that I can feel best. But I found these parts of the melody under which the program is now set only in last season.”

As mentioned, the skater had wanted to create this program for several seasons, but wasn’t mentally ready to show the idea and felt that he needed to improve his skating skills, transitions, etc. first.

“I really enjoyed working with Adam Solya on this program, “Marsak summed up. “He is an incredible choreographer and person with so many ideas. I hope we will work more in the future!”

The skater will keep his short program from last season to “Runaway” by the English band The Overtones which was choregraphed by Oleksii Oliinyk.

“There is still room to grow with this program and so we made minor modifications and reworked the step sequence due to the new ISU rules,” he explained.

Marsak’s first competition will be at the Junior Grand Prix Riga Cup in Latvia early next month and hopes to do a Challenger Series event for his senior international debut.