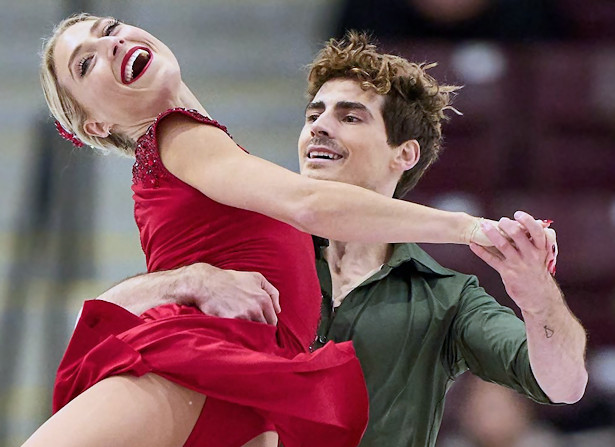 Canada’s Piper Gilles and Paul Poirier defended their Ice Dance title at 2022 Skate Canada, taking their third consecutive gold at this event. Lilah Fear and Lewis Gibson of Great Britain easily maintained second throughout the event to pocket the silver, while Marjorie Lajoie and Zachary Lagha of Canada captured the bronze — their first Grand Prix medal.

Piper and Poirier delivered a masterful interpretation to music from Evita which featured level-four twizzles, lifts, and dance spin. The overnight leaders earned many high positive grades of execution (GOE) and scored 128.47 point for first place in the Free Dance. Together with their new personal-best Rhythm Dance score (87.23), the 2021 World bronze medalists placed first overall (215.70) with just over five points to spare.

“We had a blast out there today!” said Gilles. “When we started creating this Free Dance, we knew it would become something special. We loved skating in front of our home crowd and just let the story tell itself.  I think we knew the moment when we started choreographing this program that it was going to be something special and it absolutely tells this beautiful story of this icon and her guidance with Che. Skating in front of our family and friends was really special and we’re really proud with everything we did today.”

“We’ve had the opportunity to compete for so many years, and I think in a lot of ways, it’s not something we take for granted,” said Poirier when asked to put the event into perspective with where they are at in their career. “Each season and each moment is special and it creates a particular memory. I think, especially for us, we returned this season after the last Olympic cycle, really putting ourselves as people first and our joy of skating forward. That mindset was really critical in just creating the moment that we were able to have today between the two of us and between us and the audience as well.”

“We’re at the point where the the story-telling is so important and where the connection between us is so important,” he added. “I think that’s going to be more and more important as the season progresses. We’ve had some music changes over the years when the program wasn’t developing in a way we imagined it would. It’s really hard to tell where a program is going to take you, and how it’s going to grow and what that journey is going to be like. So over the years, we’ve really learned to take the time to make sure the music that we select is appropriate and will tell the story we want to tell and grow with us.”

When asked what they would take from this event, Gilles said they look at every competition as a “stepping stone towards the end goal.”

“I think we still have some work to do and we are looking forward to getting some judges’ feedback,” she said. “We’re really excited to hear what they have to say and figure out what need to do to continue to get the scores that we want.”

🥇 #GillesPoirier 🇨🇦 PB 215.70: “We had a blast out there today. When we started creating this FD we knew it would become something special. We loved skating in front of our home crowd and just let the story tell itself.” #SCI22 #GPFigure pic.twitter.com/1u8s4MsfkU

Fear and Gibson put out a crowd-pleasing routine to music by Lady Gaga which was highlighted by their level-four lifts, twizzles, and dance spin. The team has made tweaks to the second part of the routine since the Challenger Series where they finished first in both events. In Mississauga they earned a new personal (125.38) for second place in the Free Dance and overall (209.18).

“We both had so much fun performing today,” Gibson said. “It’s always such a gift to get to skate to Lady Gaga as a free dance and it’s super empowering music. We felt so empowered by the crowd today and are super proud and happy!”

“I think we really gravitate toward music that is fun for us,” said Fear when asked about the importance of selecting music. “For us this season, we are really motivated by the message of ‘Born This Way’, which I think speaks for itself, and also by Lady Gaga as an artist, because we got to watch her live and she is so confident. She knows who she is and she’s so inclusive to everyone that was there to see her. For us, that really resonated and inspired us and it’s a message that we really want to get across in our skating and in our performance.”

#FearGibson 🇬🇧 209.18 – new PB 👏🏻: We felt so empowered by the crowd today and are super proud and happy. The #LadyGaga concert they visited inspired them a lot as they felt such an aura and such charisma from the singer. #SCI22 #GPFigure pic.twitter.com/fMBwapIJmq

Lajoie and Lagha, who stood in fourth after the Rhythm Dance, placed third in their sublime Free Dance to “Nureyev” in which they displayed seamless choreography throughout. The team, who recently took gold at both Challenger events earlier this season, earned a level four on their twizzles, lifts, and dance spin to score 119.55 points. With a total combined score of 195.49, they moved up to third overall.

“It was really fun and I’m very proud that we were able to deliver a great performance in front our home crowd,” said Lajoie. “It felt amazing to do that. I’m very proud we won our first Grand Prix medal in Canada. The program was really good today. We were nervous, but we forgot what was around us when we were skating. Being at home is more stressful, but it’s a better stress.”

“We finally found a piece of music that we both really like for our Free Dance music,” added Lagha. “That is very special to us.”

🥉#LajoieLagha 🇨🇦 195.45 “It feels amazing to win our first GP medal, especially here at home in Canada. It was really fun out there skating in front of our home audience. We finally found a piece of music that we both really like for our FD music. That is very special to us.” pic.twitter.com/Y05Zr6VMIE

USA’s Caroline Green and Michael Parsons finished fourth (118.06)  in the Free Dance and overall (194.19). The 2022 Four Continents Champions produced a flawless routine to “Rhapsody in Blue” showing much improvement since their last event at Finlandia Trophy where they finished fifth.

Marie-Jade Lauriault and Romain Le Gac of Canada produced a clever routine to music from The Pink Panther with interesting transitions and originality. The 2022 Skate America bronze medalists scored new personal bests across the board at this event and finished fifth overall (189.07).

Piper and Gilles will compete later next month in Espoo, Finland, while Fear and Gibson take Grand Prix ice next in Great Britain in two weeks alongside Lajoie and Lagha. Green and Parsons are slated to compete in three weeks at NHK Trophy in Japan along with Komatsubara and Koleto. This was a solo Grand Prix event for Bratti and Somerville.