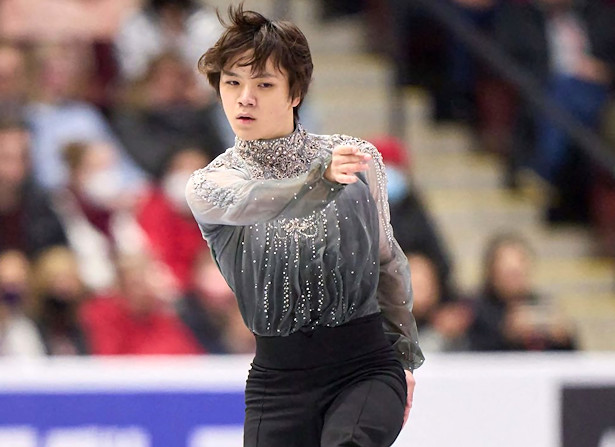 Japan’s Shoma Uno rallied after a second-place Short Program to capture the gold in the Men’s discipline at 2022 Skate Canada in his third appearance at this event on Saturday night. Teammate Kao Miura earned the silver — his first Grand Prix medal, while Italy’s Matteo Rizzo took the bronze.

Uno turned out the landing of his opening quad loop and then slightly underrotated a quad Salchow and quad flip in his routine to “Air on the G String” and “Sanctus Petrus et Sancta Maria Magdalena.” The 2022 Olympic bronze medalist later underrotated a triple Axel and stepped out of an under-rotated quad toe, however, the quad toe-triple toe was solid as was the triple Axel-double toe sequence. Two of his spins and straight-line footwork were graded a level four and he placed first in the free skate and overall (183.17/273.15).

“Today’s performance was the same as in the short program,” said Uno. “I was able to find the agenda, and the main agenda was the quad toe. I’m happy with the result and I was able to perform like I do in practice. There were good parts and bad parts, it just came out how it is.”

Despite the “q” calls (slightly under-rotated) on quad Salchow and quad flip, Uno was still able to fight through the program one element to the next.

“Even if I do make mistakes like underrotations or anything like that, I do have the confidence that I can do the ‘right’ jumps, so that is not really a big deal,” said Uno. “The one thing that I truly have to be careful about is that I do not wish to perform more than  I can do in practices. In these competitions, I would rather achieve or learn something to take to my next practice. I want to do good practices so I can do good competitions. If I do good competitions, I can take it to my next practice and keep building up, and that’s what I really believe in.”

Many fans have commented that they would like to see Uno perform his current exhibition program to “Padam Padam” as a Short Program. The routine was choreographed by Mihoko Higuchiand.

“At first we had thought about it as a candidate for a short program,” said Uno. “When it was complete, it felt like it was much more to the short program side instead of an exhibition, so we made the program over again, and we feel comfortable with it as an exhibition program. I would consider it as a candidate, but whatever Stephane (Lambiel) recommends for next season, I would like to look into, as well.”

🥇 #ShomaUno 🇯🇵 #宇野昌磨 273.15: “I was able to find the agenda which was the 3T on my combo. I am happy with the result. There were good &bad parts about today’s performance, just like every day in my practices.”He admitted that not much changed in his life since his WC title. pic.twitter.com/S7YkkAaigl

Teammate Miura landed a quad toe-triple toe and very good triple Axel, but fell on a quad Salchow and stepped out of a quad toe. All three spins were graded a level four in his routine to music from Beauty and the Beast, and the 2022 Four Continents bronze medalist finished second in the free skate (171.23) and overall (265.29).

“These results are totally unexpected,” said Miura. “Before Skate America, I thought maybe I can be on the podium when I skate well, and coming here I thought again maybe I can do it.”

The skater was very happy about his silver medal given that his right boot lace broke prior to warm up in the free skate and he decided to scrap a planned quad loop.

“Even after the lace was replaced, the boot felt soft,” Miura explained. “Therefore, I wasn’t fully confident about the, so didn’t try it.”

Now with two Grand Prix silver medals under his belt, Miura will more than likely qualify for the Grand Prix Final in December.

“These results were totally unexpected,” said 17-year-old from Yokohama. “When I went to Skate America, maybe if I do well, I could podium, but once I got the second position there, I came into this competition thinking, ‘if I do well, maybe.’ Obviously, If I’m able to go there, I will do my best and prepare myself the best that I can and skate the best I can.”

🥈”#KaoMiura 🇯🇵 #三浦佳生: “My lace broke right in front of my skate. Considering this I give myself 💯 percent on my performance today. I am very happy.”#SCI22 #GPFigure pic.twitter.com/L0SyKg0JJB

Rizzo underrotated and two-footed the landing of his opening quad toe, but then landed a quad loop in his routine to “Talking to the Moon.” The triple flip (in combination with a triple toe) received an edge call, but the 2019 European bronze medalist was otherwise solid, landing a total of five triple jumps. He earned 169.85 for a fourth-place finish in the free skate, but with a total score of 251.03, rose up one spot to third overall.

“That means a lot,” the Italian Skater said. “It was important for me to achieve a great result in this competition. “Today was great because Keegan [Messing, CAN] skated an amazing free skate before me, the crowd was crazy. I actually love this kind of situation, I can take the power from there and try to put it in my program. I skated a good program. A few mistakes, but I have two weeks to work now.”

The skater has a “final” version of the free program which will contain three quads, but for the moment, his focus is to skate clean.

#MatteoRizzo 🇮🇹 🥉251.03 – wins his first GP medal since 2019. “I am much more satisfied than yesterday. It means a lot to win this medal. It was a bit difficult competing right after Keegan but the crowd also brought a nice energy. I am happy for him and on what he achieved.” pic.twitter.com/dWIxoBcnH1

Skating to last season’s “Lullaby,” Canada’s Keegan Messing landed two solid quads, but turned out a solo triple Axel. The 2022 Nebelhorn Champion also produced a clean triple loop and very good level-for spins and footwork, but the triple flip received an edge call. He finished third (171.03) in the free skate, and with a total score of 250.72, placed fourth overall.

“I couldn’t have asked for a better skate,”’ said Messing. “To go out and perform like that, I’m so happy! I keep saying I’m not skating for a medal but for myself this year.”

#KeeganMessing 🇨🇦 250.72- “I was super nervous ahead of this competiton. I always want to do good but knowing it is my last makes you want to do extra well. I am pleased now.
It’s a rare opportunity to skate in front of my friends and family.”
He wants to become a fire fighter! pic.twitter.com/xKdoTj04gs

USA’s Camden Pulkinen landed a quad toe and triple Axel-Euler-double Salchow in his routine to “Invierno Porteno” by Astor Piazzolla, but put a hand down on a triple Lutz and stepped out of a doubled quad attempt and triple Axel. The 2022 U.S. International Classic bronze medalist scored 143.99 points for an eighth-place free skate, but with a total score of 219.06, maintained fifth place overall.

Uno will compete next at NHK Trophy along with Rizzo. Keegan is currently schedule to compete next in Espoo, Finland.