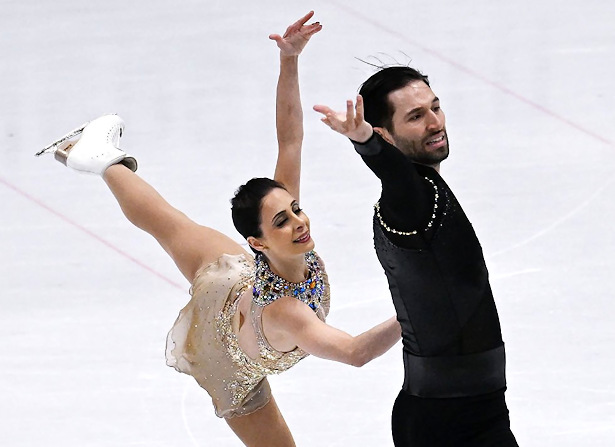 Deanna Stellato-Dudek and Maxime Deschamps of Canada perform their free skate to “Cleopatra” by Trevor Jones.

Deanna Stellato-Dudek and Maxime Deschamps of Canada won the Pair’s title at the 2022 Grand Prix de France on Saturday night in Angers. France’s Camille Kovalev and Pavel Kovalev maintained second place to win the silver while Annika Hocke and Robert Kunkel of Germany rose from fifth to claim the bronze.

Stellato-Dudek and Deschamps stood in first (64.33) coming into the free skate. The 2022 Skate America silver medalists delivered a high triple twist which garnered many positive grades of execution (GOE) in their routine to music from Cleopatra. They landed side-by-side triple toe-double toes and produced a level-four lift, but she touched down with her hand on the throw triple flip and fell on the landing of the throw triple loop. The team earned 121.51 points for first place in the free skate and overall (185.84).

“It wasn’t the easiest week of competition this week,” Deschamps confessed. “It was pretty much challenging, but we fought together this week and we have learned from each other. We’re pleased for all we fought for tonight and now we’re qualified for the Final. So we’re looking forward to going there and still improving.”

“This is our second season competing internationally and every experience that we’ve had has been new,” said Stellato-Dudek. “The first time being in the lead after the short, the first time skating last, the first time not having a good short. So it’s been a lot of new things each time! This is the experience that we need to gain to be the type of team we want to be. We’re very excited to qualify for the Final and very proud of our fight in the long program.”

The team was using their rare forward-outside death spiral last season and received a lot of negative feedback on the position.

“We tried to change it to where I’m not holding my leg anymore and kind of extending it,” said Stellato-Dudek. “So, we thought, ‘how can we think outside the box and go further with it and make it look more attractive?’ Max came up with the idea of using a forward pivot at the beginning. It was our intention of doing it at the beginning of the season, but then were told the last minute in Germany that they weren’t sure if it was legal or not. So we had to wait and make sure that it got passed.”

“We’re really happy to be the first ones doing,” she added. “I’ve always said, ‘everyone up here, we all want to win medals,’ but only three teams get that, and there are other ways to make your mark on pairs skating. So this is one of those things that we’ve feel like we’ve done to bring something new to the table that maybe other teams will watch someday.”

Stellato-Dudek won the 1999 Junior Grand Prix Final in singles skating while representing the U.S. However, she retired after the 2000-01 season due to numerous injuries. When asked to reflect on where she is today, the 39-year-old said:

“In 2016 when I came back to skating, and that’s been a pretty big whirlwind for sure, I told everyone it was a really huge leap coming back into the sport, trying to be competitive with people half my age. I’ve always had a really strong belief in myself, and I think you can do whatever you think you can do. I knew I could train and knew I was going to have to train harder than some of the girls that were younger than me because they maybe have done more than 5,000 throws in their life and I had done zero. I knew I was going to have to make up for lost time and what that would take.”

“The dedication I have is both on and off the ice,” Stellato-Dudek summed up. “I think when in 2016 when I putting on my 16-year-old boots and blades from my mom’s basement, I was having like a panic attack about pulling in my first single Axel. If you would have told me in 2022 that I was going to win a Grand Prix medal, I would definitely do (have panic attack)!”

“Everything is possible if you just work hard,” said Deschamps when asked about inspiration for the sport. “There are no limits.”

#StellatoDudekDeschamps 🇨🇦 185.84: “It wasn’t the easiest week gor us, but we fought through it together.
There are a lot of “firsts” for us this season: 1.time in the lead after the SP, 1.time skating last, 1.time not such a good SP and 1.time qualifying for the #GPFinal!“ 🎉 pic.twitter.com/laPPBLnQeT

Kovalev and Kovalev earned a new personal best scores throughout the event. The husband-and-wife picked up 63.98 points for a clean second-place finish in the short. Their free skate to “Caruso” included a level-four Axel lift and triple toe-double toes and throw triple Salchow. The only major error came when she put her hands down on the throw triple flip. The French National Champions scored 115.87 for a third-place finish in the free skate, but with a total score of 179.85, were able to maintain second overall with just 0.12 points to spare.

“It’s the first time for us,” said Camille Kovalev of winning a Grand Prix medal. “When we came here it was just to skate and improve and try to show what we can do. We changed our coaching team and the way we work in practice. I had a lot of injuries in two years, so we are very careful about this and practice more and not stop (training) every time.”

#KovalevKovalev 🇫🇷 179.85: “We came here to just show how we improved. The medal is a great surprise and we are really happy.”
On why they improved too much over the last two years they stated they changed their coaching team and the whole approach of how they work. #GPFigure pic.twitter.com/VzZLtG76ze

Hocke and Kunkel produced a triple twist, two level-four lifts and death spiral, as well as a throw triple flip in their routine to “Without You.” The only mistakes came when Kunkel turned out the landing on the triple Salchow-double Axel sequence and Hocke two-footed the landing of a throw triple loop. Nevertheless, the 2022 Finlandia Trophy Champions earned a new personal best of 119.62 points for a second place finish in the free skate. With a total score of 179.73 points, they moved up from fifth to third overall.

“We are very pleased with what we could show and we know what to work on,” said Hocke. “We had a tough time coming here because both of us have been sick and that was more mentally demanding than I would have expected. When you know you’re not one hundred percent ready, it’s definitely harder. But for us, it was a great learning experience and we’re happy that we, like everybody today, showed a fight. We were not perfect, but we will work on that.”

“I just caught covid after Finlandia Trophy, and I think you could see in the short program that it wasn’t on point,” Kunkel explained. “We are very happy with the outcome and it was a good experience.”

#HockeKunkel 🇩🇪 179.73: “For the condition we came in (Robert had Covid two weeks ago) we are really pleased. We stayed on our constant level and are really motivated for our second GP in Japan!” #GPFigure #IDF22 pic.twitter.com/VMvuubm44C

“There were some mistakes, but were were happy we kept the energy until the end and not let the whole program die,” said Ghilardi. “We will continue to work and make this the best program we can.”

“It was something different, but when we listened to it, we were like, ‘ok this ours,'” said Ambrosini.

#GhilardiAmbrosini 🇮🇹 174.72: “We are happy that we kept our focus until the end of our performance and didn’t have the two mistakes at the beginning effect us too much.” They will have a busy schedule as they will compete at Warsaw Cup and #GPEspoo and hope to improve there. 💪🏻 pic.twitter.com/fGQvVo1bdM

Karina Safina and Luka Berulava of Georgia placed fifth overall (162.44) followed by USA’s Maria Mokhova and Ivan Mokhov, and France’s  Oceane Piegad and Denys Strekalin (144.71). It was the first Grand Prix event for these three teams.

Kovalev and Kovalev (13) will compete next at NHK Trophy along with Hocke and Kunkel (11). Safina ad Berulava (7) will take share ice again with Ghilardi and Ambrosini (9) ice again in Espoo, Finland

You Pairs medalists at #IDF22: