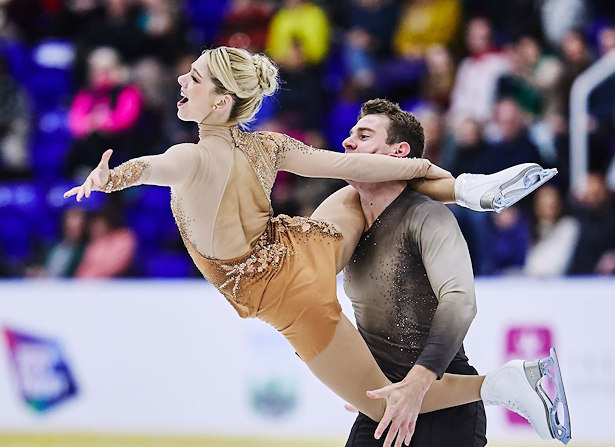 Skating to “Sign of The Times” and “Healed Broken Wings,” overnight leaders (75.88) Knierim and Frazier produced three difficult level-four lifts, but Knierim stepped out of the side-by-side triple toes and underrotated the side-by-side triple Salchows. She also put a hand down on a throw triple loop and fell on a throw triple flip, but the 2022 World Champions showed a nice level-two triple twist, level-three back-outside death spiral, and level-four pair combination spin to finish first in the free skate (129.97) and overall (205.85).

“I am very proud of how Alexa and I fought this weekend,” said Frazier. “It was a fight on some of our elements today, but I feel like we are progressing each time we go out from short to long, from Skate America till where we are this week. So that’s the goal right now, just to get back in competition shape and keep improving. Always so proud of how Alexa and I and how we fight.”

#KnierimFrazier 🇺🇸 205.85: “We are very proud on how we fought this weekend. The goal is to get back in competiton shape and keep improving steadily.” #MKJohnWilsonTrophy #GPFigure pic.twitter.com/uQre3aK3hS

Conti and Macii delivered a strong level-three triple twist and landed side-by-side triple Salchow-Euler-double Salchows in their free skate to music from the Cinema Paradiso soundtrack. Macci two-footed the landing of the triple toes and Conti stepped out a throw triple Salchow but the throw triple loop was clean. Unfortunately, the final lift was aborted, but the 2022 Skate Canada bronze medalists, who were second (68.69) coming into the long program, placed second in the free skate (115.50) and managed to maintain second place overall (184.19) to win their first Grand Prix medal.

“We are happy, but we had a big problem with our last lift,” said Conti. “But it’s ok because the other elements were super quality.”

“The last lift angers us, because we can do it so easily,” added Macii. “It is a timing entrance, so that is where the problem came from. We know where we missed and where to work. That is the most important thing. We enjoyed the audience and we enjoyed skating here and are happy with our result.”

The team feels they have a good chance of qualifying for the Grand Prix Final. However, should they qualify, Macci doesn’t feel it will be to their advantage to skate on home ice.

“We don’t like competing in Italy so much, with so many friends and family around,” he admitted.

#ContiMacii 🇮🇹 🥈”We are very happy, even though we had a problem with our last lift, but everything else was clean. We enjoyed being here and enjoyed the audience. In case we make it to the #GPFinal it will be a honour for us to compete with such high level athletes there.” pic.twitter.com/cWi7b74Ss1

Roscher and Schuster, stood in third (60.24) after the short, placed third (107.13) in the free skate and overall (167.37). The three-time national junior champions landed side-by-side double Axel-single Axel-double toes and double Salchows, but Roscher two-footed both the landing of the throw triple Lutz and throw triple Salchow in their routine to “Experience” and “Every Ending Is a Chance.”

“It was really a pleasure that we could skater here and perform our programs,” said Schuster. “I’m happy that we could reach this goal of a medal. We are overall, just happy.”

The team was in a bit of a shock given that they had placed seventh at Skate America and felt they lacked the mental focus.

“Now it was also a bit shaky, but we held our focus in the free skating,” said Schuster. “It helped us a lot that we had the same situation as at Skate America.”

Roscher agreed, adding: “We learned a lot from Skate America, we got a lot of experience. We had a lot of motivation for training to get better, to make the elements cleaner.”

#RoscherSchuster 🇩🇪: 167.37 🥉”After SA we knew it was possible but it still feels unreal & we are super happy to win a medal here! Before the skate our legs were really shaky but during the skate we were calmer.We can do much better &want to stabilize our 3S for the next comps.” pic.twitter.com/FYRSAetdVw

Georgia’s Anastasiia Metelkina and Daniil Parkman stood in fourth (58.70) coming into the free skate. The 2021 Golden Spin of Zagreb silver medalists landed their side-by-side triple Salchow-double toes and double toes, but she stepped out of both the throw triple flip and throw triple loop in their routine to “Lamentations.” The team earned 106.90 for a fourth-place finish in the free skate and overall (165.60) in their Grand Prix debut at this event.

#MetelkinaParkman 🇬🇪165.60: “We could have done a lot of things much better. Our goals are just to skate clean and bring the emotions through to the audience. There is a story about their dramatic Free Program but they purposely want to reveal that later in the season!” 😉 pic.twitter.com/AmMHLPAsTs

Metelkina and Parkman have nine point going into their second Grand Prix in Finland in two weeks.