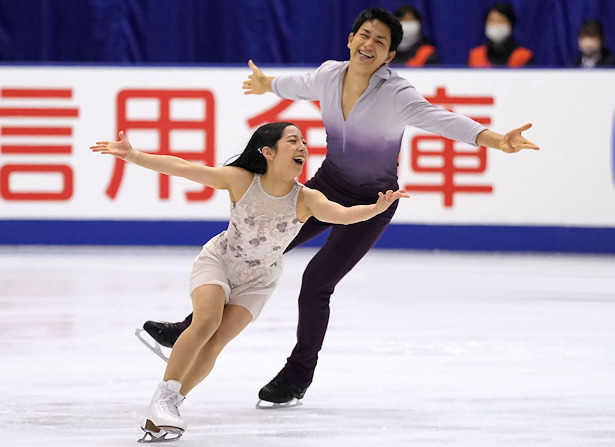 Miura and Kihara put out a solid short program (78.25) coming into the free skate

While not perfect, their free-skate routine to “Atlas: Year Two” was strong enough to easily keep the overnight leaders in first overall (216.16) after finishing first with a new season’s best (137.91). The side-by-side triple toe-double toe-double toes were a bit out of sync and the Miura underrotated the triple Salchows. She also touched down with her hand on the throw triple Lutz, but the 2022 World silver medalists produced excellent level-four lifts, earning many high grades of execution (GOE). The death spiral was graded a level three, while the pair spin received a level four, and the throw triple loop was very solid.

“We made many small mistakes in today’s performance,” noted Miura, adding that it was more important that they show their personalities and smiles. “Despite that, we earned our personal best in the total score, so we are very happy about that.”

The team was emotional at the end of their free skate. Miura said part of that was due to that fact that they were “able to completely finish the performance within the allocated time.”

“For that, we felt good,” she said, adding that they received a level three for the first time for their death spiral. “But also after the throw Lutz, we have a small show-lift and we made a mistake there for the very first time, so my reaction at the end of the program was about that mistake there.”

“We were very disappointed the Grand Prix Final was cancelled last time and we are very happy now that we will be able to advance to the Final together as a team,” said Kihara. “We want to improve our performance there. Obviously, we want to increase our levels or our performance, however, we want to be mindful of Riku’s shoulder. Right now we are in the middle of our season, so we don’t know if we will work on that right away.”

Kihara feels that one thing that helps display their chemistry on the ice is that they are both “very similar as skaters.”

“We both like to glide out very strong on our starting foot,” he explained. “I think the way we skate across the ice is very similar. We don’t force ourselves too much. We both love speed on the ice, we both love to skate very fast. On a personal level, we are very balanced in terms of personality; one is very dependable, the other one is a little bit more clumsy and forgetful at times, and we compliment each other well.”

One of the challenges they feel regarding their routines is that there are more transitions, and while not perfect, “it’s getting better.”

#MiuraKihara 🇯🇵 – 216.16 about their special chemistry:

He: “I think one thing I will mention is that we are very similar as skaters.
We don’t force ourselves too much. We both like speed on the ice.
On a personal level we are very balanced and we compliment each other well.” pic.twitter.com/53nETyApRI

The team opened their long program to “Unchained Melody” with a side-by-side double Salchow-double Axel-double Axel sequence. Chan doubled her jump on the triple toes and two-footed the landing of a throw triple loop, but the rest of their routine was fairly solid. The 2022 Four Continents silver medalists showed a very good throw triple Salchow, two level-four lifts, and a level four death spiral. They scored a two new personal bests for second (122.87) in the free skate and overall (187.49).

“Overall, we are very happy with our skate,” said Chan. “We were coming into the Free Skate with the goal of giving all of our love and not over-thinking and just going for everything. We are also very happy to have achieved a new personal best for our free skate.”

Chan and Howe now have 26 points going into the Grand Prix Final. If for some reason they do not qualify for the Final, they plan to compete next at the Challenger Series in Zagreb, Croatia.

#ChanHowe 🇺🇸 187.49: “Overall we are very happy with our skate. Also about achieving a personal best for our Free Skate.
We are very grateful if we are competing i. the final at our first GP season. We will be working on improving our score in the final.”#NHKTrophy #GPFigure pic.twitter.com/cvjAJr8q8c

McIntosh and Mimar gave a good performance to Les Miserables

Their routine was highlighted by a level-two triple twist, triple toe-double toes and a throw triple flip. The only mistake came when McIntosh went down on the throw triple loop, but the 2022 World Junior bronze medalists displayed a good level-four Axel lift and pair combination spin. They scored 113.34 for third place in the free skate and overall (175.65).

“We are very happy about our first Grand Prix medal and I am very proud of my partner that she fought until then end despite a fall,” said Mimar. “And I am proud of us for our first grand prix medal.”

“I got checked on by the doctor, I am okay,” said McIntosh of her fall.

The team might compete in two weeks at the Skate Canada Challenge, but will discuss this with their coaches as they plan to compete at nationals in January.

#McIntoschMimar 🇨🇦 175.65 🥉 Benjamin: “We are very happy about our first GP medal and I am very proud of my partner that she fought until then end despite a fall.”#NHKTrophy #GPFigure pic.twitter.com/gRFQrdoZr7

Irma Caldara and Riccardo Maglio of Italy finished fourth overall (164.23) ahead of France’s Camille Kovalev and Pavel Kovalev (162.01) and Daria Danilova and Michel Tsiba (155.84) of the Netherlands.