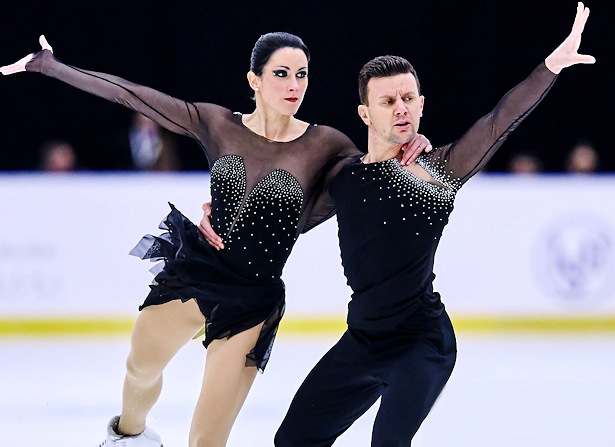 Guignard and Fabbri delivered a poignant routine to “My Love Will Never Die” in which the twizzles, dance spin, and three lifts were all graded a level four with many positive grades of execution (GOE). She received a level three on the one-foot steps, while his were a level four, and the circular steps were graded a level three. The two-time European bronze medalists, who were first after the RD (86.30), scored a new personal best of 127.44 to finish first in the free dance and overall (213.74) — also a personal best.

“First of all, we are glad we are finished,” said Fabbri, chuckling. “We are really tired right now! It’s been a really nice experience. It’s been really, really nice to feel like the home crowd is so supportive with all the skaters, and we really appreciate that!”

“Now we are an experienced couple, so we don’t really let everything around disturb us,” said Fabbri of having to skate after Fear and Gibson, who had the audience energized. “We try to create our own bubble when we step on the ice and just try to focus on our performance. All the rest doesn’t really matter. It’s not been that hard, actually, because the crowd was supportive with us as well. There wasn’t this enormous change of atmosphere.”

Guignard recalled when they first competed in Sheffield at the 2012 European Championships where they finished 11th.

🥇#GuignardFabbri 🇮🇹 213.74:
“We are glad it is finished, we are really tired. The audience supported all the skaters.
We had experience, we do not let anything around us disturb us. We create our own bubble. Nothing else matters.”#MKJohnWilsonTrophy #GPFigure pic.twitter.com/VMtxRpmKyt

Fear and Gibson entertained with their buoyant free dance to music by Lady Gaga, displaying level-four lifts, twizzles, and dance spin. Unfortunately Gibson faltered during the choreographic twizzles, resulting in a one-point deduction. Nevertheless, the 2022 Skate Canada silver medalists earned many GOEs on all other elements to finish second (120.19). Combined with 85.37 points from their rhythm dance, the team scored 205.56 for a comfortable second-place finish overall.

“We are both very proud of what we did here,” said Gibson. “We are just so excited to come here and skate in front of our home crowd. It lived up to and surpassed our expectations. Of course, I would have liked not to have that little mistake, but it is what it is, so I’m super happy with what we did.”

“It was a memory and experience that we won’t forget,” added Fear. “We are just so appreciative to have had the opportunity to skate here in Great Britain at the Grand Prix.”

With two silver medals under their belt, Fear and Gibson have a good chance of qualifying for the Grand Prix Final.

“It’s something that over the last couple of seasons we have really tried to wish for and I think the opportunity is there,” said Gibson. “Were both very excited and hopeful. It’s another goal achieved for us.”

#FearGibson 🇬🇧 205.56 “The energy was electric, the crowd was over supportive, we just really treasure this weekend so much! A memory we will never forget.”#MKJohnWilsonTrophy #GPFigure pic.twitter.com/I4HLjyWw76

Lajoie and Lagha, who were third (81.09) coming into the free dance, delivered a stirring routine to “Nureyev,” picking up a level four on the twizzles, lifts, and dance spin. The diagonal steps were graded a level two and Lajoie received a level four on the one-foot steps, while Lagha’s were a level three. The 2022 Skate Canada bronze medalists earned positive GOEs throughout and finished third in the free dance (117.86) and overall (198.95).

“It was very good two days for us,” said Lajoie. “There were very little mistakes, but I think we are very happy with the performance we did.”

#LajoieLagha 🇨🇦 198.95 “We are happy to have made it through the GP season with four performances that we are pleased of. Now we are really looking forward to take some time off.”
Next for them will be 🇨🇦 Nationals. #MKJohnWilsonTrophy #GPFigure pic.twitter.com/mO1yVGYX9C

In their first major competition of the season, USA’s Christina Carreira and Anthony Ponomarenko finished fourth overall (187.42). Their free dance to music from the Backbone soundtrack was highlighted by level-four twizzles, dance spin, and lifts.

The 2022 Four Continents bronze medalists had a late start to the season as Ponomarenko had ankle surgery in February. While he wasn’t able to train, Scott Moir worked with Carreira. Madison Hubbell and Adrian Diaz also were added to the team, which was a big help.

#CarreiraPonomarenko 🇺🇸 187.42 “We are very happy about our first competiton. It was a great start! Madi (Hubbell) and Scott (Moir) both themselves wanted to skate to “Summertime” during their careers but neither managed in the end.#MKJohnWilsonTrophy #GPFigure pic.twitter.com/KgSC8FBWP4

Taschlerova and Taschler picked up  seven points at this event and will compete next in Espoo, Finland, along with Carreira and Ponomarenko (nine).