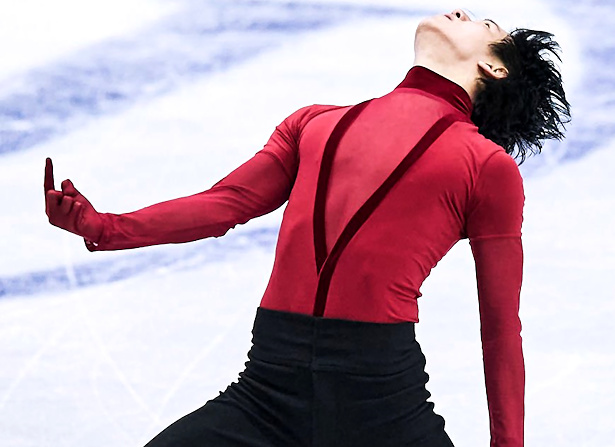 Adam Siao Him Fa of France performs his Short Program at the 2023 European Figure Skating Championships.

France’s Adam Siao Him Fa  took a convincing lead in the Men’s short program at the 2023 European Figure Skating Championships on Wednesday. Matteo Rizzo of Italy is just over 10 points behind in second place, followed by Latvia’s Deniss Vasiljevs.

Fa gave a mesmerizing routine to “Rain, In Your Black Eyes” in which he nailed his opening quad toe-triple toe. He fought for the landing of the triple Axel, but it was clean, and he followed up with a good quad Salchow. The 2022 Grand Prix de France Champion also earned a level four with many positive grades of execution (GOE) on his spins and footwork to score a new personal best of 96.53.

“I am really happy about my performance today,” said the 21-year-old. “It is my first clean short program of the season in an international competition. So I am very satisfied with my work together with my team. I was very stressed in the beginning, but when the program started, I breathed in deep and felt very calm.”

Rizzo doubled the back end of a planned quad toe-triple toe in his rock routine to music by Måneskin. The 2019 European bronze medalist also underrotated and put a foot down on his quad loop, but the triple Axel was solid. He earned a level four for two of his spins, while the footwork was graded a level three, and scored a new season’s best of 86.46.

“It was very hard for me, because the short program is always like a big wall that I need to crush,” said the 24-year-old. “But I’m in a good position for tomorrow. That was the most important part for me. In the free program, I want to skate as best as I can, that is my goal.”

The skater revealed that he loves the music by Måneskin, an Italian rock band that formed in Rome in 2016.

“I always want to bring something Italian with me around the world,” said Rizzo. “This short program is something that I can give to the audience outside of Italy.”

Rizzo’s goals for this season are to try to put more quads in his programs, two in the short and three in the free skate.

“So it’s a big step for me,” he said. “We knew already that in the beginning of the season. It’s a long trip, a four-year trip to the next Olympics, and the goal is there. What comes between this is just little goal after little goal. I’m sure that towards the end of the season my programs will be much better, but we can already see it’s developing.”

Skating to “Englishman in New York” by Sting, Vasiljevs landed a solid triple flip and triple Axel, but underrotated the back-end of a triple Lutz-triple toe. All spins were rewarded with many GOEs and were graded a level four, while the steps received a level three. The 23-year-old picked up a new season’s best of 84.81.

“I wasn’t defending anything,” noted Vasiljevs, who is the current bronze medalist. “I was skating for my own joy. I was skating for myself, first and foremost, to surpass myself as an athlete and as a performer. I was skating for the crowd, for the people, for the judges, for everyone who was watching it online. I wasn’t fighting, defending, or doing anything of that sort. I was enjoying the moment in its fullest, trying to take it with a mindful approach.”

The skater made the decision yesterday to take out a planned quad Salchow.

“As I became much better in the training than last year, I do feel a little bit maybe discontent with myself for not proving well enough that I was capable to do a quad,” he said. “In the warm up, I still did two of them, and they were back to back, and I was very satisfied. So, of course, it’s like, in a way, it almost hurts to know that you can and you miss this opportunity to shoot because of the personal greed. I do very much wish to do it for more points. In the end, I performed. I skate for the people, so I might as well contribute to this community with the best performance I can and take a little bit safer.”

Kevin Aymoz of France was off to a good start, landing a very good quad toe and triple Lutz-triple toe, but then bailed on the triple Axel. The error was costly and he is currently in fourth place with 83.75 points.

While the skater was not happy about the missed element, he was still happy to be at the event.

“Like, I was so ready, so excited!” said the 25-year-old from Jarrie. “There were fears and strengths and happiness. I stepped in a hole at the end of the program. That’s the game. I don’t like it, but that’s okay. I mean, this one is one of the programs that’s supposed to be on the podium after the short. I’m really sad, but that’s okay.”

Lukas Britschgi of Switzerland fell on his opening quad toe, but recovered to produce a triple Axel and triple Lutz-triple toe. The 2022 CS Budapest Trophy silver medalist is in fifth place with 79.26 points.

“It was a good fight,” said the 2022 CS Budapest Trophy silver medalist. “Despite falling on the quad, the rest was kind of clean.”

The skater suffered a broken collar bone after a fall from his bike after his second Grand Prix event in France.

“The road was frozen,” he explained. “Luckily it healed very well and I could go back on the ice after Christmas.”

Britschgi also finally debuted his full costume as the vest was reworked three times. “Perfectly timed for the most important event this season!” he said.

Poland’s Vladimir Samoilov produced a triple Axel, but fought for the landing of a quad Salchow and triple Lutz-triple toe. He is in a close sixth place with a new personal  best of 78.26.

“I am very happy to be here to be able to skate here,” said Samoilov, who is competing for the first time at this event. “It was much better than last time (at his debut at the 2022 World Championships), I was less nervous. It is a good experience for me here.”

Italy’s Gabriele Frangipani nailed his opening quad toe-triple toe, but underrotated a quad Salchow and stepped out a triple Axel. He also received a one-point deduction for a “fall” in his footwork, and is currently in seventh place (77.35).

“I was tired,” he said of the triple Axel. “I tried to fight as best I could. Next time I will do it.”

“Programming for this season had a lot of problems, and I’m really happy to finally almost do a clean program,” added the 2022 CS Ondrej Nepela Memorial champion. “There is still a lot to work on, but I’m really happy, because for me, it’s one of the hardest seasons. At the same time, it’s one of the best ones for me: for how I’m growing up like an athlete and for even starting to be more consistent in the competition.”

Teammate Daniel Grassl, the current silver medalist and one of the favorite contenders, popped a quad Lutz to finish eighth (77.03).

“I felt very pressured in this competition and I was very nervous,” admitted Grassl. “In practice I was doing well, but in the competition I was too stressed. I hope I will come back and fight in the Free Skating as I always do.”

Part of the pressure came from the negative comments the skater received when he went to train in Moscow.

“It was very difficult to find the motivation after the Olympics,” said the skater explained. “I felt very good there (in Moscow) and my motivation came back. Many people are against me and my decision.”

The Men’s event will conclude with the Free Skate on Friday.