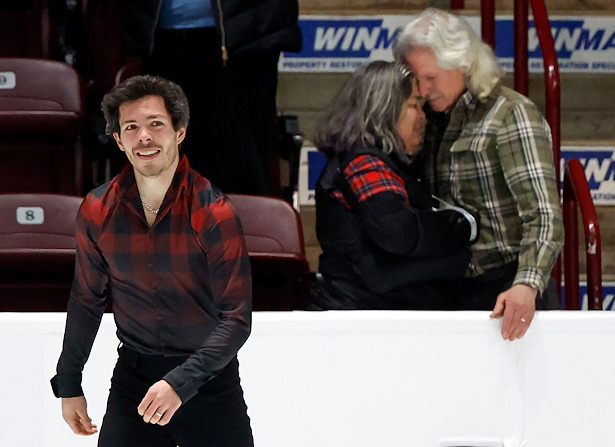 Keegan Messing skates away from his parents after a long hug with them at his final appearance at the 2023 Canadian National Championships.

Keegan Messing took his second consecutive title in the Men’s event at the 2023 Canadian Tire Figure Skating Championships. When his name was announced in the final flight of the men’s free skate at Oshawa’s Tribute Communities Centre, Messing garnered the most raucous applause. And the Olympian did not disappoint.

Skating to “Home” and “Lullaby,” the defending champion showcased his effortless speed, rapid spins and both solid and botched jumps that have defined his skating. At the beginning of his routine, falls on his second quadruple toe loop and his triple loop, as well as doubling out on a triple Salchow, could have led to more unravelling. However, the veteran refocused and landed a solid triple Axel, triple Lutz-triple toe and a triple flip in the second half of the program to close his routine to wild ovation. He earned 163.38 points in the free skate to finish his last national competition with a winning score of 257.78.

“In my final nationals, I think I was so close to tears too many times this entire week,” Messing confessed. “It’s such a joyous, sad, emotional whirlwind that I could not have ended on a better note. I could hang up my skates right now and just be happy forever. The only thing that could have made it better would be maybe a little bit of a cleaner free skate.”

The fan-favorite credits his training for the recovery midway through his program.

“We put in so much work off the ice, and that’s actually one of the reasons I am quitting,” he said. “It’s not because I don’t feel like I can compete anymore. But it’s putting in the work off-ice with kids. It’s so difficult. It’s getting harder and harder every year to show up to the rink, willing to put your body through this kind of torture day in and day out.”

Messing created a healthy lead for himself of more than eight points after the short program to “Grace Kelly” by Mika in which he landed a quadruple toe loop on two feet, but rebounded to land a sublime triple Axel and triple Lutz-triple toe loop combination.

In his final Canadian championship, two-time winner #KeeganMessing says he has been holding back tears all week long. His triumphant free skate garnered 163.38 points and featured a quad toe loop and two triple axels.
“This is special.”#CTNats23 pic.twitter.com/TSPHQwxMVz

Conrad Orzel finally lived up to his long-discussed potential by winning the silver medal after years of erratic results at nationals with a total score of 237.46. His free skate, set to “Paint it Black,” featured a quadruple toe-triple toe combo and he earned a score of 151.30.

“This is pretty crazy,” Orzel said after his win. “I couldn’t have, in my wildest imagination, expected anything more than what have I achieved in the past few days. I’m just so grateful and thankful for this moment.”

The 2021 Autumn Classic champion credits his new coach, Ravi Walia, for helping to create a “strong and polished” routine and a training program that balances the elements.

New national silver medalist #ConradOrzel credits his new coach #RaviWalia for the success in Oshawa. Specifically, he says the improvements in his spins and transitions help if he doesn’t nail each jump#CTNats23 pic.twitter.com/t6LQ5efIA3

Wesley Chiu repeated as the national bronze medalist, rebounding from an eleventh-place finish after the short program. In the free skate, Chiu landed a quadruple toe loop-triple toe loop combination and two triple Axels, one in combination with a double toe loop. He also managed level fours on all spins. He earned a free skate score of 160.71 for a total competition score of 226.15. Chiu was sick earlier this week and persevered past it to perform in Oshawa.

“My goals were to put out two solid programs, because that has really been a struggle this season,” Chiu said. “Unfortunately, only half of that goal was achieved, but I will continue to work on that for the rest of this year.”

Chiu said the short program result fueled him to skate more cleanly in the free skate.

“Last night, it was really disappointing for me,” he reflected. “I think it really set a fire inside me to do better today, and being in second warm up, really there’s no pressure. There’s nothing to lose, really, going into the long program.”

National bronze medalist in 2022, #WesleyChiu said his poor SP “lit a fire” to skate well in the free skate, which he did!
Two triple axels and a quadruple toe loop earned him 160.71 points.#CTNats23 pic.twitter.com/lq4H0ObM1h

Chiu was not the only contender to sabotage a better result with a poor short program. Stephen Gogolev and Roman Sadovsky also struggled on Friday night. Seventeenth after the short program, Gogolev redeemed himself in the free skate by winning that component with three quadruple jumps, two triple Axels and a score of 170.16. His total competition score was 220.13.

Sadovsky landed thirteenth in the short program and ninth overall with programs replate with popped jumps, stumbles and falls. The 2020 national champion finished with a total competition score of 206.86.

Chiu will represent Canada at the World Junior Championships.