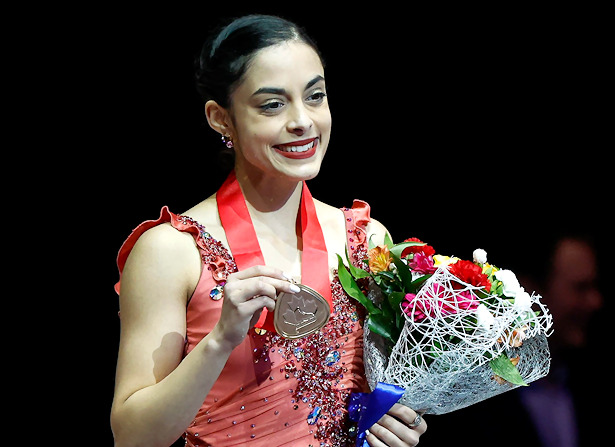 Madeline Schizas channeled a mix of moxie and Maria in her West Side Story routine to secure her second Canadian championship before a sparse crowd at Oshawa’s Tribute Communities Centre.

“It’s pretty surreal,” she said. “Honestly, I don’t think that if you told me in 2020 that I was going to be a two-time Canadian champion, I would have really bought into it and here we are.”

The win did not come easily, however. A double flip and squeaked landings on a few jumps, Schizas earned a score of 128.15 in the free skate to West Side Story, second to Kaiya Ruiter, and grossed 196.47, about two points less than her first win in 2022.

“I knew that the skaters ahead of me had put pressure on me to put out a skate that maybe didn’t need to be perfect, but it did need to be a fight start to finish,” said Schizas. “And that was difficult. I was standing backstage and I was just like, ‘Oh gosh, like this is not going to be a walk in the park.’ And I’m just happy that it was a fight, start to finish. You know, the end of that program wasn’t easy, but I pushed right to the end, and I’m happy with that.”

Schizas was helped by her commanding lead after the short program where she scored 68.32. The Olympian’s only noticeable error in her “Black Swan” routine, replete with dark choreography, was a step out on the triple loop out of footwork. Her intricate program helped to produce a lead of over seven points over second-place finisher, Lia Pereira who later succumbed to errors in the free program and dropped to fifth overall (165.83).

“There were parts I was happy with and parts I was less thrilled about,” she admitted after the short program.

The 19-year-old from Oakville confessed that skating last is an uncomfortable position. “I skated last and sometimes I struggle with that, just the wait. So, I was happy with how it went. I came in with a plan for what to do during the wait, because this is something I struggled with at SCI and I think I managed it better than I think I sometimes do.”

“I did have a fairly large lead though,” Schizas said after her win about the healthy short program standing, which she tried not to mind-trick her in preparing for the free skate. “I know firsthand that you can ruin any lead. There is no size lead that makes you safe if you really want to push the envelope on that one. So, I knew that I needed to skate well.”

Schizas’ coach, Nancy Lemaire, reflected on how to address the double flip and the obvious struggles that Schizas has with the trio of jumps in the middle of her free skate (flip, Salchow and loop).

“She’s actually very good at the flip in practice, but it seems to be the glitch in the program and she said she feels like that’s the one ‘tired jump.’ So yeah, there may be some sort of debate about whether that should maybe be an easier jump at that point and even push the flip back a little bit more. But, she can do it in practice, so I think she can do it in competition. It’s just in her head a little bit.”

Relieved to win her second national title with a free skate score of 128.15 highlighted by a solid triple lutz-triple toe loop, #MadelineSchizas admits that watching her competitors backstage she thought, “Oh gosh, like, this is not going to be a walk in the park.”#CTNats23 pic.twitter.com/Gqi8eIFcpN

Ruiter won the night of the free skate with her soulful performance to “Inspiration,” choreographed by David Wilson, earning 129.82 points for a total competition score of 189.36. The 2020 Canadian Junior Champion rebounded from a sixth-place short program finish to land seven triples jumps on Saturday night, including a steady triple Lutz-triple toe loop combination.

“It’s just a performance that just felt amazing to skate in front of this entire crowd and people watching in my family,” she said after her free skate performance. “It meant the world to me. I just wanted to live in the moment and I just wanted to enjoy it.”

The result was especially sweet for Ruiter, who was out two seasons due to an injury after impaling left calf with her right skate blade.

“After everything that’s happened this year, I have worked so hard for this so I wanted to enjoy it,” relayed the 16-year-old from Alberta.

Coach Scott Davis was ecstatic, but unsurprised by the finish.

“It’s a testament to her daily training,” he said. “That’s pretty much what she does in training, maybe not at that emotional level probably, but with the elements, she’s pretty consistent. She challenges herself. She has to push herself to be competitive with the other top skaters in the world. So, she’s one that’s like, ‘I need to do two triples, right?'”

After a glowing free skate to Inspiration with 7 triple jumps, #KaiyaRuiter was ecstatic with her 129.92 point-scoring performance. “I really lived in the moment. I am very proud.”#CTNats23 pic.twitter.com/jlfdhTv4l1

Snagging the bronze medal in her senior Canadian Championships debut, Fiona Bombardier captivated audiences with her natural charisma and joy. Six triples jumps in her Cirque du Soleil free skate earned Bombardier 120.02 points for a total competition score of 180.54 and helped to maintain her third-place standing after the short program. Obvious struggles for Bombardier in her third senior competition were on her double Axels with gritty landings.

“I just wanted to put out there how I’ve been training, said Bombardier. “I made a couple mistakes just on my double Axels—which is, of course, the first like jump that I did acquire – but I moved on and I was able to accomplish a lot of other elements. I love figure skating! It is fun, but it’s really nerve wracking to my stomach and my head, but once you get out there, it just kind of all goes away.”

The daughter of Canada’s darling in figure skating in the 90s, Josee Chouinard, and former Canadian pairs champion Jean Michel Bombardier, her parents were in the audience in Oshawa, cheering Bombardier on.

After her exuberant free skate, earning 120.02 points, #FionaBombardier said of her demonstrated confidence, “You fake it ‘til you make it!”
In only her third competition as a senior, she admitted to being very nervous before the event.#CTNats23 pic.twitter.com/dCc0f6Vt5Q