Twitter just reminded me that this was a year ago -

To anyone going through a tough time, just keep going. Hold on. Everything changes.

And when things are good, cherish it.

Finley said:
Twitter just reminded me that this was a year ago -

To anyone going through a tough time, just keep going. Hold on. Everything changes.

And when things are good, cherish it.
Click to expand...

This cute baby... one pop upset her so much
She really is a perfectionist in every sense of this word, she even made so much prep to be a perfect as IA host.
It must be really tough to be a competitor, when you have such high demands for yourself. But this trait also lead her to all the greatest achievements, making her one of the most decorated athletes in the world, and only second Grand Slam winner.

Alina Zagitova will perform at the opening of the GUM skating rink on Red Square:

The grand opening of the GUM skating rink will take place on November 28 on Red Square in Moscow. A special program was prepared for the guests on this day, the organizers' press service told TASS on Tuesday.

"Especially for the guests of the grand opening of the GUM-Skating Rink on November 28, the strongest figure skater on the planet, holder of all titles in figure skating Alina Zagitova will present an excerpt from the musical "Sleeping Beauty. Legend of the Two Kingdoms".
Click to expand...

There will be a live training session with Alina on OZON apllication:

Producer and choreographer Ilya Averbukh told how the Olympic champion Alina Zagitova was criticized after the first release of "Ice Age", where she is the host.

- Alina was hard going through a barrage of criticism after the first broadcast?

- I think that inside myself, of course, yes, but never showed it. She is a great clever, great fellow. I always support her and do my best to make her feel protected.

The Ice Age project is largely for skaters, so that they take a step into the next life. It happened. I probably laid down such a task, and it happened.

There are constructive opinions to which I have great respect. For example, a remark: "We really like it, but maybe you would speak a little more slowly." You can listen to this, you can argue with that, but this is a normal human dialogue.

I'm not saying that everyone should praise endlessly - no. But you don't have to assert yourself with bile and destruction.

It seems to me that Alina showed character, and in the same way, in general, her formation is taking place, as well as the formation of the participants.

And this is the magic of the project - from episode to episode we see growth, and this, too, cannot be overlooked. Whether Alina becomes further leading or not, for her it will be another experience for her later life - well, thank God! It seems to me that this is also the essence of the project - everyone learns, - said Averbukh in an interview with the KONOFF channel. 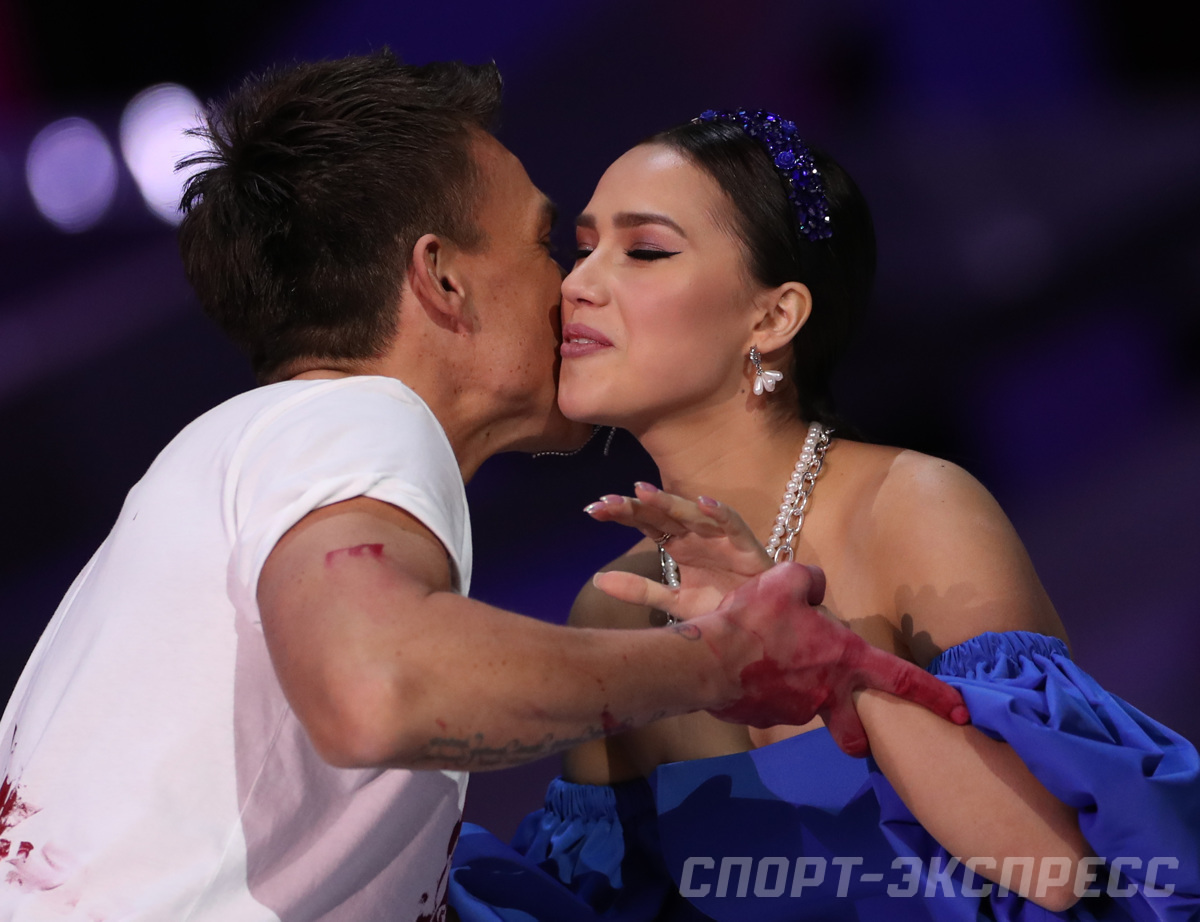 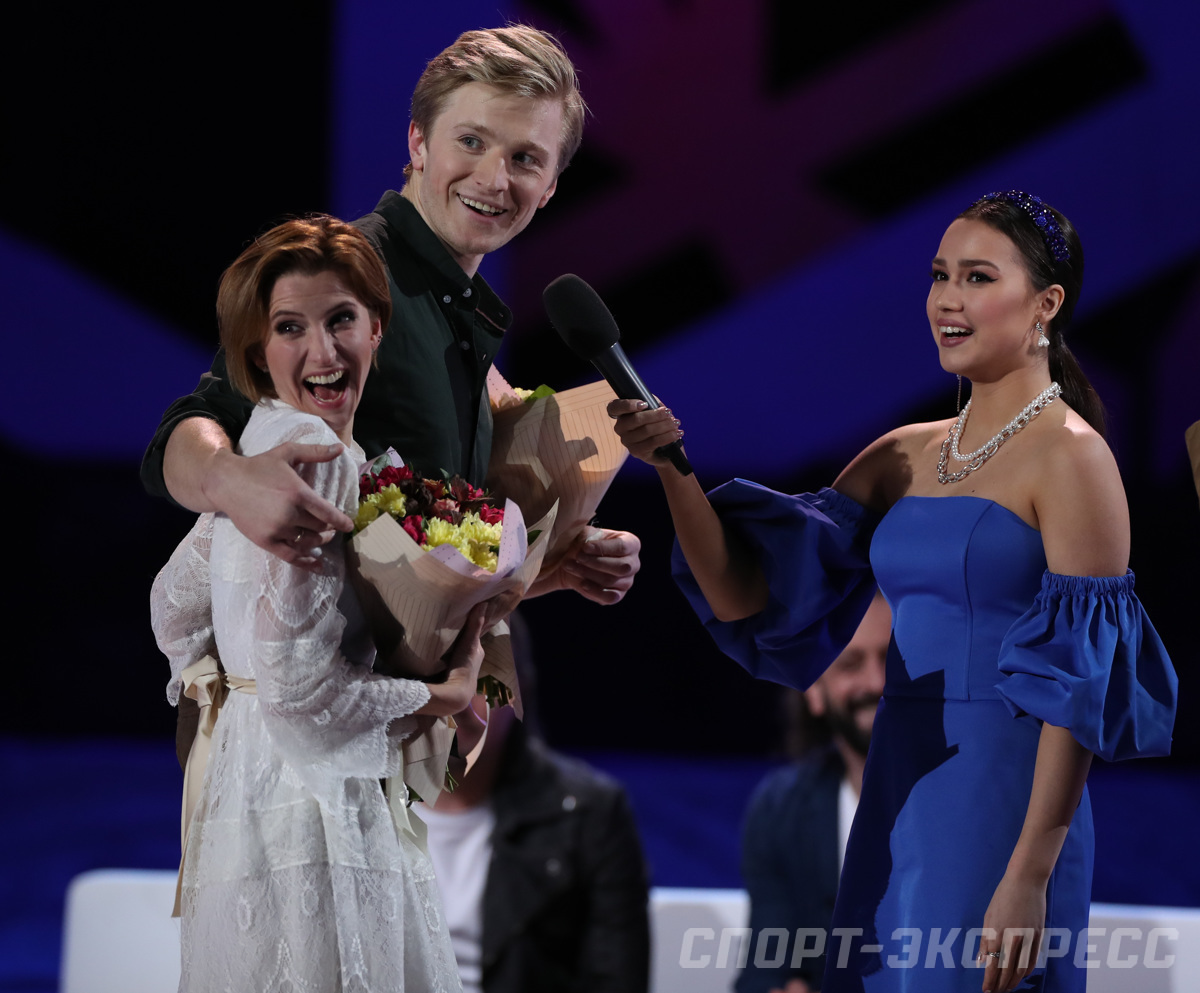 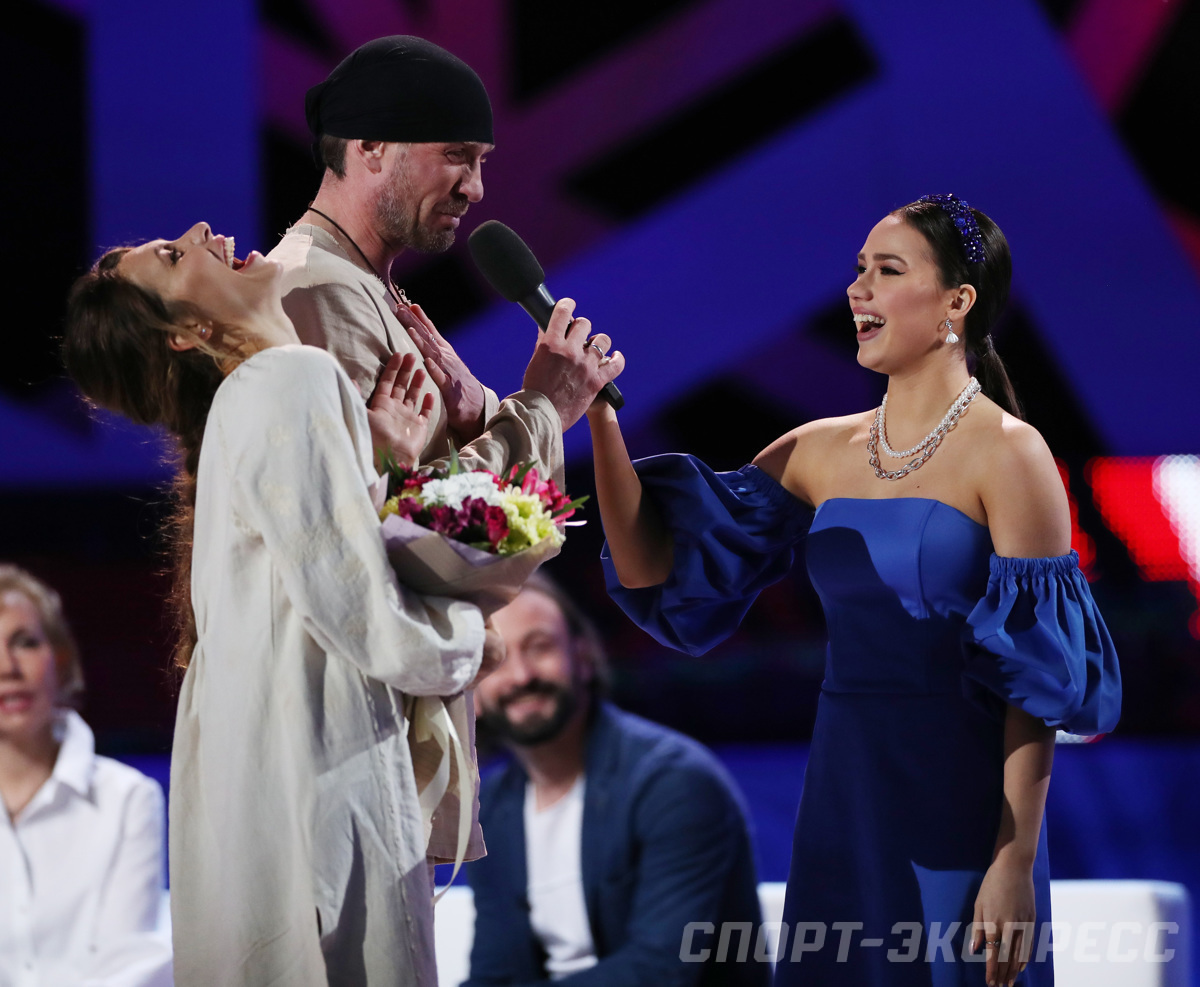 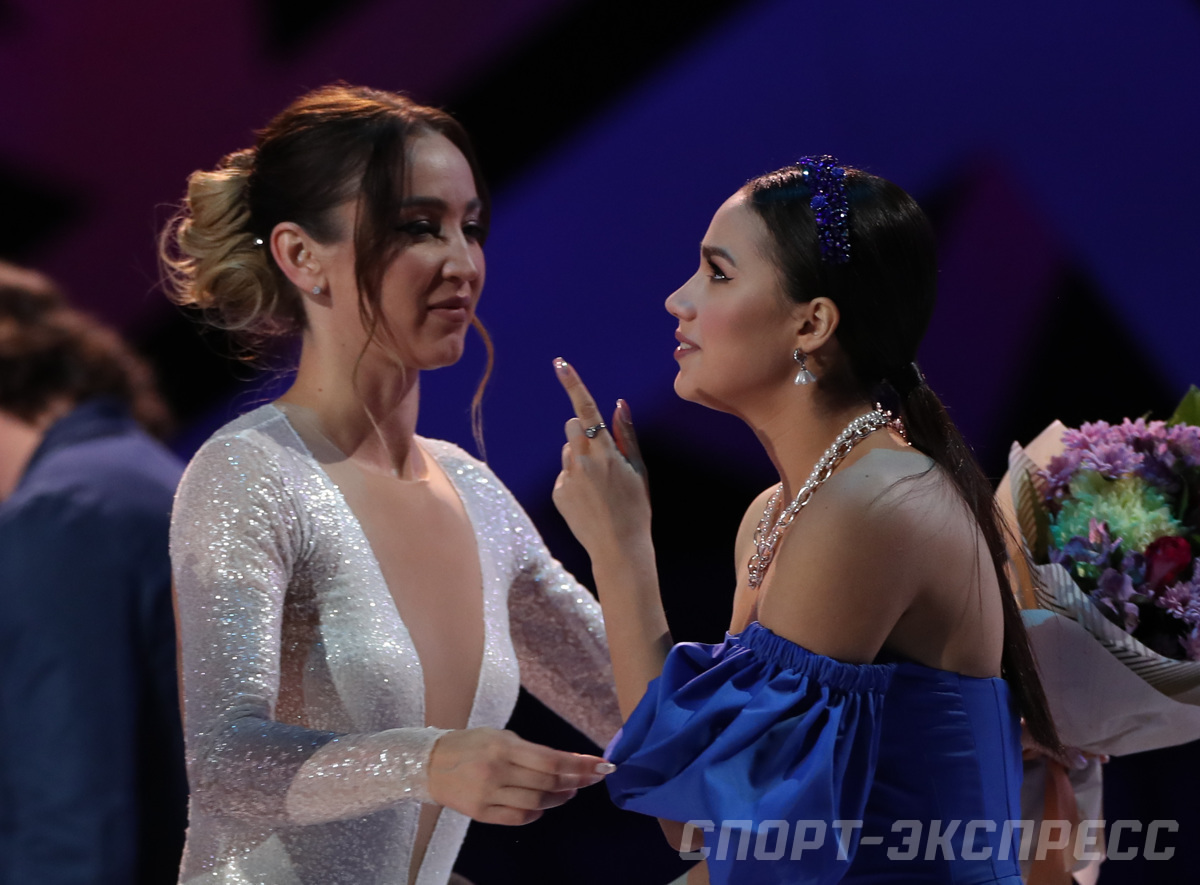 Zagitova performed gorgeously at the Grand Prix Gala. Is it time to come back?

"How we missed her! Inimitable Zagitova overshadowed the champions of the Russian Grand Prix.

The crazy outcome of the women's competition at the Grand Prix stage in Moscow will be remembered for a long time. However, for a separate (and very large) part of the fans, the main event of the tournament took place after the medals were drawn. At the gala performances, fans of Alina Zagitova gave their favourite a luxurious reception with applause, posters and gifts. And the Olympic champion paid back with sensual and soulful skating.

For nine months, Alina Zagitova did not go out on the ice in front of the public. Therefore, the two performances of the skater in two weeks became a real feast for her fans. In early November, Alina interrupted a prolonged pause at the show "In love with figure skating." The host of the evening Dmitry Guberniev did not hide his admiration for Alina, and the fans sadly noted that without Zagitova figure skating had become impoverished.

It was still unknown then that a new opportunity to enjoy the champion's skating would come very soon. The fans rejoiced at the news of Alina's participation in the gala performances at the Moscow Grand Prix stage no less than for her sports victories. Tickets were sold out even more actively than for the competition itself, and on Sunday the Megasport arena was full of bright posters in support of Zagitova and her photographs.

Zagitova returned to the Moscow stage of the Grand Prix two years after a magnificent victory. And even though now she skated only in the gala, the return was brilliant.

The skater did not disappoint her fans and skated with full dedication, giving it all. Obviously, Alina still maintains high demands on herself. Unlike the champions of the Moscow stage of the Grand Prix, who showed one number each, Zagitova went on the ice twice.

The first performance was to the track by М83 - Outro. This touching number is dedicated to the memory of Lyudmila Shalashova, Alina's former mentor and mother of choreographer Daniil Gleichengauz. Zagitova skated tenderly and sensually, putting all her sadness into this performance, and the touching finale with a blossoming flower in the hands of the skater brought the audience to tears. One can only imagine what Gleichengauz was experiencing at this moment, not taking his eyes off Alina.

In technical terms, Alina, as well as at the show at CSKA, was not perfect, but for the amazing transfer of the image and bewitching skating, she can be forgiven both the uncertainty on the first triple lutz, and the fall from the second jump. Obviously, because of her studies and work in the "Ice Age" show Zagitova trains less than before. But even in such conditions, she retains the height and power of her jumps. It seems that should she pay a little more attention to working on the technique, and the mistakes would go away by themselves.

In the second act, Zagitova got an honorable place - the skater performed right in front of the champions of the Moscow stage. Alina again showed her splendid program to music from Notre Dame de Paris, which premiered in early November. And this time the bright dramatic production was even better for her. It seemed that in two weeks Zagitova got even deeper into the image of the passionate Esmeralda and was able to transfer her tragic story onto the ice with amazing relatability.

In addition to the soulful image, Alina surprised in the second number with her jumps. Zagitova again showed her champions character, correcting the mistake made in the first outing. The skater performed an excellent triple lutz, and then jumped a triple flip, but it worked out a little bit worse.

At the end of the performance, the audience instantly jumped up from their seats and bathed Alina in a standing ovation for a long time. Daniil Gleichengauz, who was very worried about her every jump, also applauded his beloved student.

So, instead of the expected extravaganza of Trusova and Shcherbakova, the Moscow stage of the Grand Prix became a benefit performance for two adults and experienced figure skaters. Elizaveta Tuktamysheva delighted the fans with a sensational victory, and Alina Zagitova was incredibly good at gala performances and eclipsed all Russian Grand Prix champions.

The example of Tuktamysheva and the form that Alina herself showed, hint that the Pyeongchang champion can still be competitive at the biggest starts. The only question is whether Zagitova wants to give up everything that has appeared in her life recently, and again practically settle and live at the rink. Some fans almost beg her to do this, but still, most of Alina's fans are ready to accept any choice of their favourite. If only it brings her happiness."
Last edited: Nov 24, 2020

A goddess to be worshipped...

When the teleprompter is going out -

from an article about the Rostelecom Gala on sport24.ru:

...The audience warmly greeted all the participants and gave everyone a long standing ovation. But the main star of the evening, predictably, was the Olympic champion Alina Zagitova.

Today Alina acted as an invited guest, and the student of Tutberidze skated with Outro and Esmeralda programmes. After her first performance, Megasport arena exploded with applause, and after the second, there was a snowstorm of fans' hearts falling on the ice.
Click to expand... 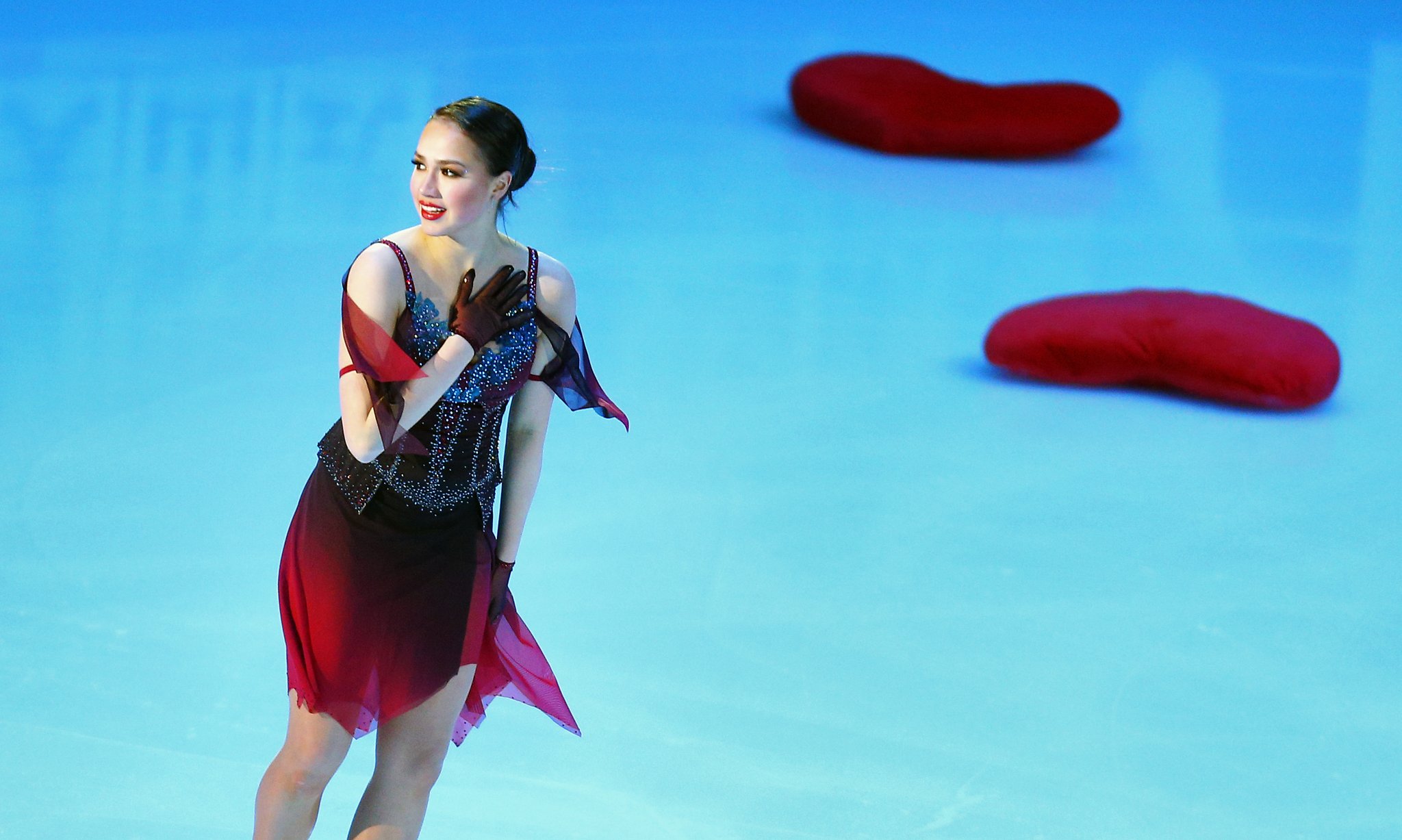 "My face is multifaceted 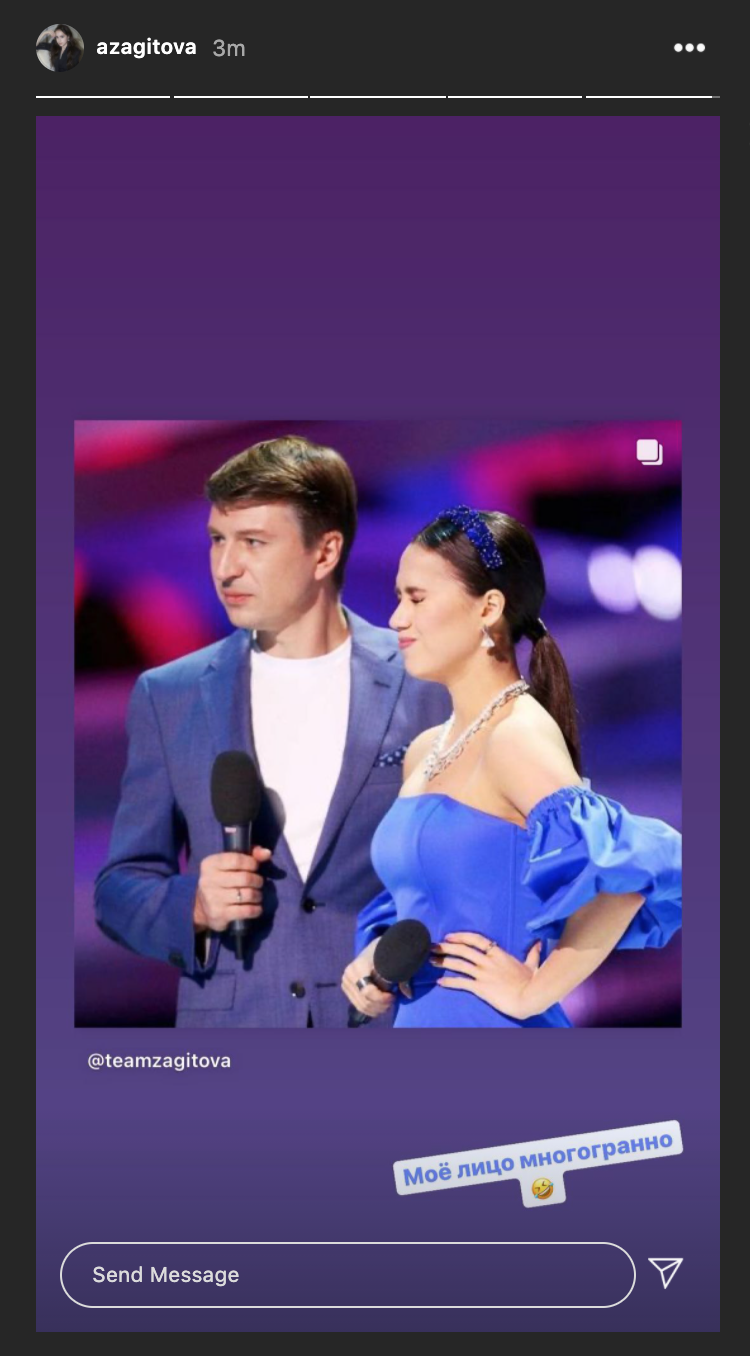