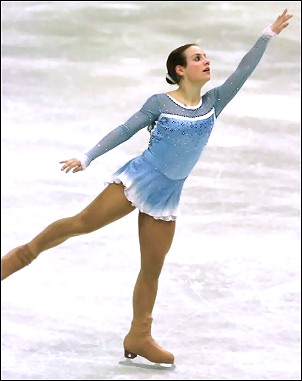 Before Canada’s Meagan Duhamel could become a champion, she had to compete with her older sister, Heather, for training time. “My sister was a skater and I followed her around,” Duhamel stated. “I first started skating when I was three, but I could only take CanSkate classes because my sister was taking private lessons and my parents said I didn’t need any. I was ten before I convinced them to let me have private lessons.” Heather retired after qualifying for Canadian Nationals in 1999 where she finished back in the pack. Now Meagan is the 2003 junior ladies champion.

Once she had convinced her parents she was serious, Duhamel progressed rapidly. She landed a single Axel the next year and in another month had all her doubles except the Axel. She landed her first triple salchow in another year at age 13. Now she’s working on getting all of her triples to be consistent so she can begin putting triple-triple combinations in her programs this summer. “All the top eight girls in qualifying at Junior Worlds were doing triple-triples,” she said. “I’m going to work on adding a triple/triple during the summer. I was doing triple loop/triple loop in my program, but now I’m doing triple loop/double toe in my short. The triple loop is my favorite jump. I do running three turns into it and it feels like I’m flying. If I ever work on a quad, it will be a quad loop. I’d like to do one someday.”

Her goals last season were to get two Junior Grand Prix assignments and make it to Junior Worlds. She accomplished both feats, finishing fourth in Courchevel and 12th in Bratislava, then 13th at the Junior Worlds in Ostrava. “It was the first season I did what I wanted to do,” she said. “I worked a lot harder and I had more confidence.” This season, Duhamel finished second in the long program at Minto Skate in August and has numerous events on her schedule. Eventually, she hopes to go to the Olympics. “I’ll definitely try for 2006, then we’ll see,” she said. “I don’t plan to stop until I quit enjoying it.”

The talented 17-year-old trains at the Mariposa School of Skating in Barrie, Ontario, with coaches Lee Barkell, Doug Leigh and Michelle Leigh. “I moved to Barrie in the summer of 2000,” she said. “I actually almost went there when I was 12 because Lee (Barkell) had a partner for me to do pairs, but I changed my mind because I didn’t want to be away from home. But then I went anyway for singles. Maybe I’ll try pairs again if I get another opportunity.”

She trains for two to three hours a day on ice during the week, with another hour of off ice work. “It’s really motivating to be in Barrie,” she said. “It went from just me and my sister to all the big names skating together. It helps me to see how they work and carry themselves on the ice.” Weekends she has off. “Every two to three weeks, I try to go home and see my parents,” she said. “Sometimes I train there on the weekends so they can see me skate.”

Michelle Leigh choreographs Duhamel’s programs. Last season, she used Reflection of Passion by Yanni in the short and Scheherazade by Rimski Korsakov for the long. “Usually my coaches pick my music,” she said. “but I picked the music for the short because a friend of mine skated to it and I liked it. The long program was the same as the previous year. Usually I change my programs every season, but last season I changed long programs in mid-season when I went from novice to juniors so I had only used it at Canadians.” For 2003-2004, Duhamel is using Rachmaninoff’s Rhapsody on a Theme of Paganini and Piano Concerto Number 2 for the long and Passacaglia from The Secret Garden for the short. “I’d like to skate to some Spanish music, like Malaguena,” she continued. “Lots of people have skated to it, but I’ve never used music like that. I need to really work on my second mark and Latin music is really good for expression.”

Off ice, Duhamel listens to all kinds of music except rap. She also likes to dance and takes some jazz and modern dance classes. She also likes to hang out with her friends from Mariposa. “All the skaters are like family,” she said. “We’re really close friends and like to do things together like going to the movies. I like anything new an exciting, but I like comedies the best.” She also uses a computer to talk to her friends. From her competitions, she said, “I keep all my credentials and stuff I get at events and all my stuffed animals at home in my room. I like the really colorful ones.” Her pet cat also stays home with her family while she lives with a host family in Barrie.

Duhamel hasn’t traveled much yet. “My only vacation was when we went to Florida with my family when I was ten,” she said. “I’ve only been to a few nice places for skating, but I liked Courchevel in the mountains in France. I want to go to Japan and Asia and Egypt. It’s so different there. Maybe I can get the Junior Grand Prix in Japan.”

Duhamel is in the twelfth grade at Innisdale High School, where her favorite subjects are English and gym. “When I was younger, I did gymnastics, swimming, soccer and baseball,” she said. “I have a lot of energy to use. I wanted to play on teams but our town was too small so we just played for fun. I did do track and field for my school in the summer and went to regionals. I did the 100 and 200 meters and the running long jump. I still run on Sundays for cardio.”

“I enjoy creative writing,” she continued. “I liked writing stories when I was younger. I’m going to take time off after I finish school next year to concentrate on my skating but eventually I want to go to university. I want to do something in journalism or broadcasting, and maybe do some coaching.”