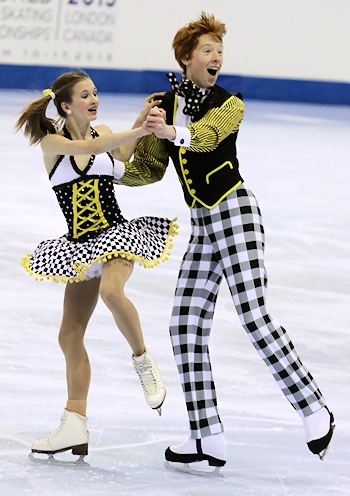 Tuesday’s competition at the 2012 Canadian Figure Skating Championships kicked off with a shot of adrenaline, courtesy of surprise winners in the novice ice dance event, Lauren Collins and Danny Seymour (CO).

Jumping up from 12th place last year, the youngsters out of the Mariposa School of Skating in Barrie, Ont., delighted the audience on hand with an effervescent program. Using music from Cirque du Soleil and Make ‘Em Laugh from Glee, Collins and Seymour were adorable as clowns, never letting the theme of their dance fade to the background.

Collins credited Mariposa choreographer Kelly Johnson with the idea for their crowd-pleasing program. “The choreographer had the idea, and we just decided to go with it,” she said.

“We had input in basically all of the decisions,” Seymour added, “but big rounds of applause for the choreographers and the coaches. We could not have done this without them at all.”

The duo scored a season’s best of 61.06 in the free dance and their total score of 87.55 was also a new personal record, beating the mark they set last month at Skate Canada Challenge by over seven points.

Collins and Seymour had finished fifth at the Challenge and were hoping to fight for a spot on the podium here in Moncton, however, pulling off the win was a most unexpected and delightful surprise.

Melinda Meng and Andrew Meng (QC) were the favorites heading into this event, having won four events already this season, and established a slim lead after the pattern dances. The siblings skated extremely well in their free dance to tango music by Marco Calliari, carrying a mature quality that they have just begun to develop this year.

“We had a lead, even if a very small one, and that boosts your confidence going into the free,” Andrew said. “It was exciting.”

The Mengs handled the pressure well, skating without major errors, but their base value was just a notch lower than Collins and Seymour’s. While the Mengs did their lifts well, they may have lacked a bit of amplitude, relatively speaking. The competition was close, but the Mengs’ free dance score of 59.52 slotted them into second with a total of 87.34. Even with such a close finish, the Mengs were all smiles after the event.

“Second at our first Nationals is pretty exciting,” Melinda said. “It was a really nice experience.”

Samantha Glavine and Jeff Hough (EO) won the bronze medal, earning 58.62 in the free dance and 84.82 overall. Glavine and the Mengs siblings collided during the five-minute warm up before their flight and Glavine suffered cuts on her leg and hand, but she was able to refocus before they took the ice to compete.

It did appear to take Glavine and Hough a minute or so to relax and get into their free dance, set to I’d Rather Be Blue and Le Jazz Hot. The elements were all done well, though, without any noticeable errors, and by the end of the program, the duo was really selling their choreography. This makes two bronze medals in a row for Glavine and Hough; they were last year’s Canadian pre-novice bronze medalists.

Another close margin separated the third and fourth place teams, and unfortunately, just .71 kept Katie Desveaux and Dmitre Razgulajevs (CO) from standing on the podium. In their second year at the novice level, the charming team from the Scarboro FSC had really hoped for a medal in Moncton.

With kind of a “mad clown” theme to their free dance, Desveaux and Razgulajevs stuck to their characters and really performed, but a couple of missed levels and a long lift deduction resulted in fourth place. They earned 56.42 in the free dance and 84.09 overall.

A third team from Central Ontario, Haili Moyer and Aaron Chapplain, reached their season goal by finishing fifth. The duo has made an impressive climb over the past year, finishing 20th on the pre-novice level in 2011 and steadily improving over the course of the season en route to a personal best in Moncton.

Moyer and Chapplain’s free dance score of 55.10 and total score of 78.20 shattered their previous best marks by seven and eight points, respectively. Skating a sassy tango to Hernando’s Hideaway, the Mariposa-trained duo completed all of their elements well and really got into the character of the dance.