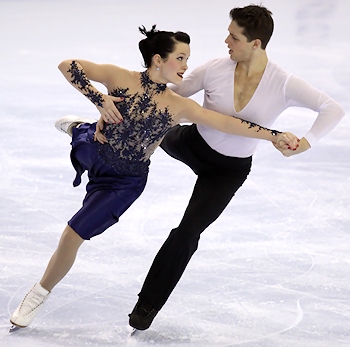 The junior ice dancers lived up to expectations in their free dance at the 2012 Canadian Figure Skating Championships, and the event turned out to be the most closely-contested competition at the junior level.

Poulin and Servant put together back-to-back clean programs for the first time all season, proving that they are ready to deliver when the pressure is on.

“I think that maybe we were kind of counted out because of our consistency issues, but we just proved that we believe in one another and we can do it,” Servant said.

Their Passion Nomad flamenco free dance was mature and artistic, with superb edging and attention to choreographic detail. Beautiful level four lifts and secure level three footwork sequences contributed to their free dance score of 76.33, which helped them to overtake Madeline Edwards and Zhao Kai Pang (BC/YT), the leaders after the short dance.

Poulin and Servant’s score of 131.47 is the highest score attained by a Canadian junior dance team since the introduction of the short dance, however, the Québec juniors were not concerned with their marks this time.

“I think our goal was just to come out and show that there’s no consistency problem,” Poulin said.

“It was really for ourselves,” Servant added.

As junior champions, Poulin and Servant are now favorites to receive one of the assignments to compete at the upcoming World Junior Figure Skating Championships. The team announcement will be made after the seniors compete.

Edwards and Pang closed the competition with an emotional and confident free dance to music from Notre Dame de Paris, and happily settled for the silver medal. While winning four titles in four years—the team won juvenile, pre-novice, and novice titles in 2009, 2010, and 2011—would have been a great story, a championship was not what the talented youngsters were expecting.

“We’re so happy with how we skated,” Edwards said. “Our main goal was to enjoy it and we wanted to put on a great performance. I think we really did that, so we’re happy.”

Performing with exceptional artistic maturity for 15- and 16-year-olds, Edwards and Pang won the program components mark, scoring an excellent 72.74 in the free dance, yet their program was only ranked fourth on an extremely competitive night.

“This is definitely one of our most dramatic free dances,” Pang said. “It’s kind of fun to be dramatic. It’s really big music.”

Edwards and Pang were not the only novice medalists from last year to jump to the junior podium this year. Training partners Bruser and Lum leapt four spots onto the junior podium from seventh place after the short dance. The team wanted to make a big comeback in the free dance, and they did just that, earning 74.16 points in their second-ranked free dance. Their score of 125.84 was just enough for the bronze medal.

“My mindset was, ‘I’m going to rock this free dance,'” Lum said, “and I’m happy. Overall, I thought the performance was great.”

Mackenzie Bent and Garrett MacKeen (EO) also delivered a strong comeback free dance, ranking third in that segment with 73.41 points. Their total score of 125.57 was a heartbreaking .27 from the medals. Their charming South Pacific free dance was entertaining and executed with great precision. With all level four elements except level three on the footwork sequences, their technical elements score was actually the highest in the free dance.

The margin between fourth and fifth was even closer—just six one-hundredths of a point separated Victoria Hasegawa and Connor Hasegawa (QC) from Bent and MacKeen. The Hasegawas’ Black Swan free dance has grown considerably over the course of the season, and the siblings performed quite well, carrying a balletic feel throughout the program.

Élisabeth Paradis and François-Xavier Ouellette (QC) and Caelen Dalmer and Shane Firus (BC/YT) also turned in terrific performances to place sixth and seventh, respectively. The difference between third place and seventh place may seem like quite a bit in terms of rankings, but in terms of scores, Dalmer and Firus were only 1.69 points from the bronze medalists.