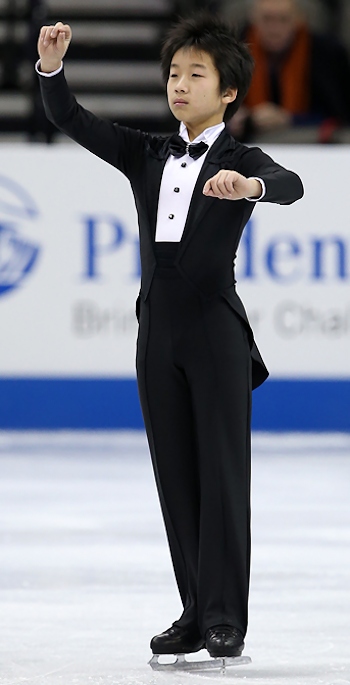 Tomoki Hiwatashi performs his Long Program at the 2013 US National Figure Skating Championships.

In what was a competition full of promise, it was 13-year-old Tomoki Hiwatashi who walked away as the men’s Novice champion at the 2013 Prudential U.S. National Figure Skating Championships.

The gold medalist ceded the free skate to 15-year-old Oleksiy Melnyk, but was able to use his lead from the short program to propel him to the win.

“I thought I could do better,” said Hiwatashi. “I think that I was generally pretty slow, and when I was watching everyone in warm up, they were all doing triple Lutz, flips, and loops. They were faster than me, too, so I just want to get better at all of that. I think that I was a bit nervous because of that.”

In a stroke of genius, Hiwatashi transformed his character of a train conductor in his highly entertaining short program into a more serious symphony conductor in his Die Fledermauss freeskate.

“I’m trying to imagine being a conductor in the program, and I conduct the music,” Hiwatashi said.

The newly-crowned champion landed four triple jumps—two each of Salchow and toe loop en route to his victory, and earned a personal best score of 155.29 points in the competition.

“I’m really happy. I’m really excited to maybe move up to junior next year,” he said. “I’m surprised that I get to skate in the exhibition, and I think that I will skate my short program.”

Melnyk, 11th in this competition last year, redeemed himself today by winning the free skate and nearly snatching the title from Hiwatashi. In the end, he earned 152.99 points, good enough for the silver medal.

“It feels good—much better than last year,” he said. “I think that this really will change me—give me more confidence. I think that mentally I have changed, and I think that (winning a medal) will help with that even more in my competitions.”

The Reston, Va., native landed six triple jumps—one each of toe, loop, flip, and Lutz, as well as two Salchows in his Ancient Lands freeskate. His lone mistake was a fall on the back half of a triple toe loop-triple toe loop combination that likely cost him the title.

“I did alright,” said the silver medalist. “I just fell on the triple toe-triple toe, but the rest of the jumps were fine. I did the spins and the footwork alright—it’s just the fall that put me in second overall. Not a bad skate, though.”

Slipping from second place after the short program to win the bronze medal was Nicholas Vrdoljak, from Westmont, Ill. The 16-year-old finished in seventh place last season, and was surprised with his placement today.

“I didn’t even come here to medal,” he said. “I just wanted to do two good performances, and I managed to do one and a half. It wasn’t one of my best, but it’s good to win bronze.”

Vrdoljak opened with a triple toe loop-triple toe loop combination, but struggled with some of his other jumping passes in his routine to The Man in the Iron Mask. He finished with 139.11 points in the competition.

“It wasn’t my best skate, but I’m pretty happen that even after I made a mistake, I came back and did a pretty good program,” said the bronze medalist. “I wasn’t able to do that last year, and to me that is a victory in itself.”

“I guess I didn’t give it my all,” said the 14-year-old. “I’m a little disappointed in myself, but I guess there is always next year. I just think that I could have done a little bit better.”