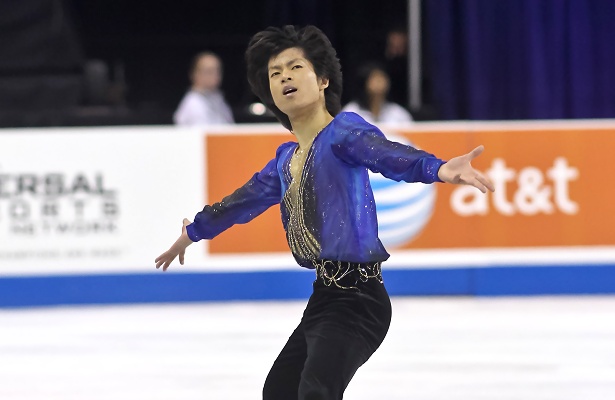 Japan’s Tatsuki Machida, who has regularly been in the shadow of his famous teammates Mao Asada, Miki Ando and Daisuke Takahashi, is an interesting skater that has invariably been appreciated by knowledgeable fans.

During the 2014 Olympic season, the quiet 24-year-old made a break-through by winning the silver medal at the World Championships and placing fifth at the Olympic Winter Games in Sochi. He began this season with a second consecutive Skate America win two weeks ago in Chicago, Ill.

“Compared to last season, not just Skate America, when I went through the Olympics and Worlds, I think I grew a lot,” said Machida. “I think I’m more capable. I have a bigger capacity and the programs are built on these new capacities.”

This season, the literature student chose the music for both programs, using Philipp Mills as his choreographer again.

“He is the one that understands my artistic side the most,” explained Machida, who is also coached by Yoshinori Onishi. “I picked the music first and then we had a long discussion about how to construct the programs with this music, how to edit the music. It was a long process until we got to the actual choreographing.”

For the short program, Machida selected “Fantasy for Violin and Orchestra” by Nigel Hess and Joshua Bell from the Ladies in Lavender soundtrack.

“This program is about sad love,” explained the Japanese silver medalist, who said he felt drawn to the music because of its emotionality.

In the free, the World silver medalist is skating to Symphony No. 9, “Ode to Joy” by Ludwig van Beethoven.

Both selections are favorites for Machida, who has wanted to skate to them for a long time.

“Until last season, I did not think that I was capable to express the music fully,” the Japanese skater elaborated. “Now I feel ready for this music.”

His free program is divided into three parts and the “Alla Marcia” portion in the middle appears slow, but in fact, it is not.

“There is actually no slow part,” said Machida. “I have to give 120 percent in all three parts to give a good performance. Right now, I have to work on controlling my emotions during the program and on my stamina.”

The skater explained that in last year’s free skate to “Firebird,” he had enough time to prepare for the elements, but here there is none in the new program.

“My free program is very challenging,” the 2013 Rostelecom Cup champion said. “My second triple Axel is extremely hard since I don’t have any time to get energy, so when I master this part, I feel like I am able to do anything in my program.”

Interesting enough, the skater stands still for 15 seconds at the beginning of the program after the music starts, and admits that this act along requires a lot of stamina.

“I tell myself that everything is going to be okay in the 15 seconds,” Machida said. “I don’t like the time. It feels like hell just waiting there. It might look easy, but it isn’t. Just waiting for your music to start is kind a scary thing and it is challenging.”

Beethoven’s Ninth Symphony is popular in Japan, especially when performed at the end of the year.

“Japanese Nationals are held around that time and I hope it is going to hit the right moment for me to perform it,” said Machida.

The 2010 Four Continents silver medalist, who didn’t really take a break following the Olympic season, began working on his new programs with Mills in May. He also performed in many ice shows over the summer.

“I started to think about how to approach these things as a professional performer or skater,” he said. “It gave me the opportunity to find out what kind of performer I want to be.”

Machida, who resides in Takaishi, is continuing his literature studies and plans to graduate next spring.

“I feel that studying gives me a lot,” he said. “I am learning a lot from it. Being a top skater does not give me an excuse not to study. I want to be a role model for the younger skaters and I want to show that it is possible to do and that it is important to approach these two things as hard as it can be.”

Although Machida is going into this season as a top contender, he does not feel extra pressure.

“I am focusing on what I want to express on the ice and what kind of performance I want to show,” the 2012 Cup of China champion stressed. “When Daisuke (Takahashi) retired, people were saying, ‘this is it for Japanese figure skating, it is just going downhill from there.’ As a competitive skater, this is not a very nice thing to hear. I feel the responsibility to carry on the legacy and keep the level up.”

As Skate America Champion, Machida has made a big step towards the ISU Grand Prix of Figure Skating Final. His next event is the Trophee Bompard in Bordeaux, France, November 21-23.

“In the free skating (at Skate America), I didn’t do the second triple Axel in the second half and I left out some transitions as well,” he pointed out. “Those are the things that I want to perform in France and I think I can add at least ten points to this program.”

Machida knows he is getting older and admits to feeling less endurance, so he is glad that he has a month in between his two Grand Prix events.

“I cannot have two competitions in a row, for example, so I have to figure out how to prepare to skate in the best condition,” he shared. “I won the first one and I also have enough time to prepare for the next event. I want to surprise the audience at each competition.”