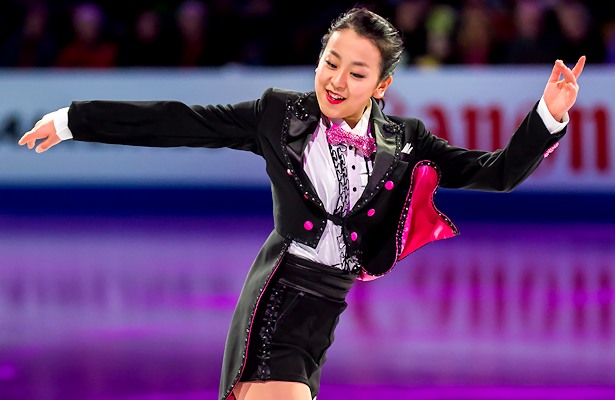 Japan’s Mao Asada performs to “Puttin’ on the Ritz” at the 2016 World Figure Skating Championships Gala.

Exactly one year ago, Japan’s Mao Asada, who had been taking a rest from competition since she claimed her third world title in 2014, announced that she would come back to compete for the 2015-16 season.

“During my break, I started to think I can still do it,” Asada wrote in her blog. “Gradually and naturally, I started to miss the feeling of achievement and happiness when I gave a great performance in competition. And then the idea came to my mind that I want to return to competition.”

She was able to enjoy the feeling of achievement again when she helped Team Japan to win the Japan Open in early October with a lights-out free skate. The following month, she won gold at Cup of China, the event where she showcased consistent triple Axels.

However, the skater with 15 Grand Prix (GP) gold medals struggled to pull off a complete performance at the following NHK Trophy and GP Final, popping and under-rotating several jumps. Asada managed to get a bronze medal in Nagano, Japan, but in a highly competitive field in Barcelona, Spain, the four-time Final winner settled for sixth. That was when the feeling of disappointment started to hit the skater.

“After I came back to competitions, many things didn’t go well,” the 25-year-old revealed. “After the (GP) Final I sometimes thought maybe I shouldn’t have come back. I also thought that our prime time was over.”

In fact, the six-time Japanese champion was thinking about a complete retirement during the time of the Japanese Nationals in Sapporo, Japan, at which she finished third. However, her thinking started to change when she was assigned a spot to the 2016 World Figure Skating Championships.

“I used to think as long as I am a competitor I should aim for the top finish. But since I was selected to the world team, I decided to change the way I think,” Asada offered. “I started to realize I should first focus on delivering a good performance to the audience. Result is important, of course, but I should first try to skate a performance that I am satisfied with, and that was the reason why I decided to return.”

In January, the three-time Four Continents winner decided to withdraw from the event this year in order to better prepare for upcoming worlds. In the final week of March, Asada went on her ninth trip to the Worlds in Boston, Mass.

Her short program did not go well as she stepped out on the opening triple Axel, and the landing of the triple loop was shaky. As a result, she was placed ninth in the segment.

“I feel regrettable for my triple Axel, but I think I skated the way I wanted for the rest of program,” the skater commented.

In the free skate set to the music of Madame Butterfly, the three-time world champion pulled off a more complete performance of her difficult season. Except for popping a triple Lutz into a double, and receiving a few under-rotation calls, she executed the planned elements well, and all her spins and step received level-four and good Grades of Execution (GoE).

“Usually I would be very disappointed at how I did in my short program at such a big stage, but since my thinking was different this time, I was able to reset my mind, and skated my free with confidence.”

The skater who finished seventh in the segment and overall was satisfied and felt relieved that the season was finished.

In retrospect of the comeback season, the skater who called herself as a “veteran of the sport,” considered that her experience over the years helped improve her artistry.

“The styles of my short and long program this season are completely different, but since I am more mature now, I think I was able to present both well,” the 25-year-old reflected. “I was really enjoying the difference when I skated to the programs.”

“In my free skate, the character is a Japanese beauty,” she continued. “She is matured and very strong inside. I wanted to act such a role, and I feel very happy that I could perform it to the audience overseas.”

Despite being the second oldest skater in the competition, Asada doesn’t think age is a big problem.

“In the world of sports, 25 can still be considered young,” she said. “There are so many athletes who are older than me still working hard every day, and I want do the same thing.”

The skater also raised the examples of the silver medalist at this event, Ashley Wagner (who turns 25 today), and Carolina Kostner who won a bronze medal at the 2014 Olympics at the age of 27.

“What they were able to achieve in such a young field motivates me to work hard,” said Asada.

Looking into next season, the two-time Olympian is determined to improve her techniques.

“I want to keep pursuing the artistic side of the sport, but coming back to competition as a competitor at the end of the day, I want to achieve good results,” she said. “The technical development has achieved high level around the world. In order to aim for a higher finish, I really have to further improve my jump techniques, up the ante, and be a stronger skater.”

When she announced her comeback last year, the 2010 Olympic silver medalist said she wasn’t thinking about next Olympics in Pyeongchang, Korea, however, Asada is feeling the competitive fire again.

“I started skating when I was 5, and I started to dream of competing at the Olympics since I was 10,” she noted. “I competed twice, but since I am continuing a competitive career, I strongly want to go to the Olympics one more time, and I think that is probably my ultimate goal.”

“Only a couple of years are left for me to compete as a figure skater,” Asada continued. “I want to end my career with a smile. When I look back, I want to be able to say that I’ve done my best, it was the right decision to come back, and my skating life was fabulous.”

The skater is currently working with Lori Nichol in Canada on her new programs and plans to make an appearance at the THE ICE, a show that will be held in Japan in late July.