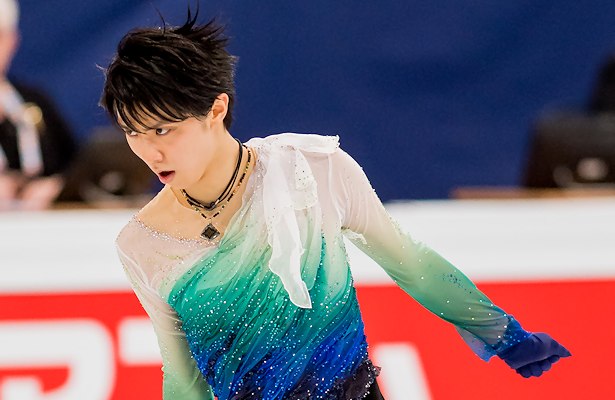 The top six men delivered in the free skate at the 2017 World Figure Skating Championship, impressing the audience in Helsinki, Finland, with a slew of stylish performances punctuated by quadruple jumps.

In his sensitive and powerful interpretation of “Hope and Legacy” by Joe Hisaishi, Japan’s Yuzuru Hanyu began his program with a smooth quadruple loop and followed up with three more quadruples as well as six triple jumps to win his second World championship. The 2014 Olympic champion earned a record 223.20 in the free skate for a total combined score of 321.59.

“It was a good free skate,” said Hanyu. “I was disappointed with how I did my short program, of course. So, I forgot everything and changed my mood. I felt comfortable today, not much pressure. I focused on each element and expression. I could have had more speed though.”

Fierce and focused, Hanyu’s teammate Shoma Uno skated his tango set to “Buenos Aires Hora Cero” and “Balada para un loco” by Astor Piazzolla with panache to snag a personal best of 214.45 points for a total combined score of 319.31—another personal best. The silver medal winner cranked out four quadruple jumps including the loop and flip.

“I’m very happy to have the best performance in the biggest competition of this season,” said Uno. “I wanted to enjoy skating today. I was quite relaxed. In the last World championships, I failed and I didn’t want it to happen again. Everything I’ve been going through since the 2016 Worlds brought me to this competition. The effort paid off and I’m happy to finish this season in a best way. I can’t ask for anything more.”

“I’m very satisfied with my performance today, it is even better than I could dream of,” Jin said. “It was really good and I am very excited about it. Everyone has a lot of quads now and everyone has to challenge themselves. It’s like an extreme today, everyone has a challenge, so do I. I think it’s the most important to be able to challenge. As for me, I want to improve my levels and do more difficult jumps. Today’s performance was my best so far.”

Defending World champion Javier Fernández of Spain entertained with his fun Elvis program that opened magnificently with a quadruple toe loop, quadruple Salchow-triple toe loop combination and triple Axel-double toe loop combination that made the audience suspect the Spaniard might three-peat. However, Fernandez later fell on the quadruple Salchow, doubled his planned triple flip and stepped out of the landing on his triple loop. The 2015 and 2016 World champion was rewarded with a free skate score of 182.14 and an overall score of 301.19 to finish just off the podium.

“The program was not my best one,” Fernández admitted, “but I did everything I could. Maybe I was not 100 percent concentrated when I had to be concentrated. I pretty much had to wait and hear all the information that was going on on the ice. I heard the scores and absolutely everything and that kind of got into my brain a little bit and played around with negative thoughts.”

“It was well-paced, if I look at the whole week,” reflected Chan. Today was a great result of this new plan I have with practices, which is to be more conserved and be smart in practice and not to train, but just get the feeling of the ice.”

“As a result, I can maybe add it to the short with less hesitation,” Chan said of the clean execution of his quadruple Salchow and looking towards the Olympic season.

USA’s Nathan Chen opened his program to “Polovtsian Dances” by Alexander Borodin barrelling into a quadruple Lutz jump, but fell. While the 2017 Four Continents champion managed four additional clean quadruple jumps, he received only 193.39 points in the free skate for a total competition score of 290.72 and placed sixth.

“This wasn’t the program I wanted to perform,” he said in disappointment. “I tried a very difficult program today. I’m glad that with the mistakes I made today, I’m still potentially competitive against these guys.”

With the exception of a fall on a quadruple toe, USA’s Jason Brown was otherwise clean in his routine to “The Scent of Love” from the Piano soundtrack. He finished in  seventh in the free skate and overall with 269.57 points (personal best).

“It wasn’t my best skate today, but I performed it the best I could,” said Brown. “I gave it my absolute all. The crowd was incredible and I tried to perform to them the entire time.”

“There was a lot on my plate this week. I really wanted to do the best that I could for the U.S. team,” he added regarding getting three spots for the US men for the Olympics. “I’m glad that Nathan and I were able to get three spots for the U.S. men heading into the Olympics. That was really, really [big] goal of mine. I wanted to do everything I could so that when I left the ice, I felt like I gave it my all to reach that goal.”