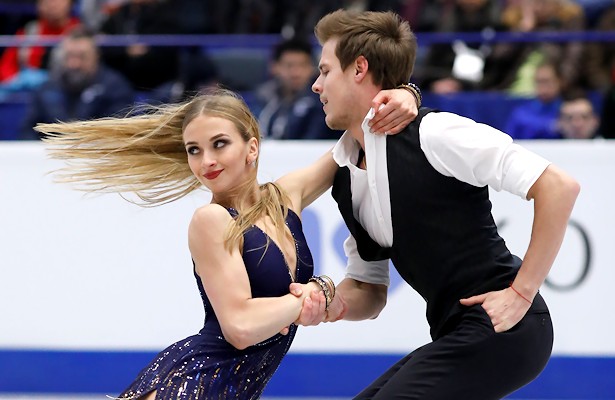 Ever since Russian ice dancers Victoria Sinitsina and Nikita Katsalapov teamed up in April 2014, they have been struggling with coaching changes and injury, and as a result, haven’t quite reached their potential. Many frowned upon their partnership from the very beginning as Katsalapov, now 25, left his former partner Elena Ilinykh to skate with Sinitsina (now 22). Ilinykh and Katsalapov had already won the 2014 Olympic gold medal in the team event and an Olympic bronze medalist in the individual event, and most observers predicted a bright future for them.

This past season was not easy for the team from Moscow. Sinitsina and Katsalapov barely clinched the bronze at nationals (edging Ilinykh and her partner Ruslan Zhiganshin). They finished a disappointing 10th at Europeans and did not go to the World Championships as Russia only had two spots. The skaters, who were training with Oleg Volkov and Elena Tchaikovskaya, looked for a fresh start and joined Alexander Zhulin’s training group at the end of the season.

“All this happened when we finished the season, after the European Championships,” Katsalapov confirmed. “We were skating at two different ice rinks with Elena Anatolevna Tchaikovskaia and with Oleg Volkov. Basically everything was good, but there was one main thing missing. We had been looking at this (Alexander Zhulin’s) training group from the outside and to put it short, we saw that this is a great team, a strong group and we just asked Elena Anatolevna (Tchaikovskaya), ‘what would you think about this alternative?'”

Tchaikovskaya, one of the coaching legends in Russia, supported the skaters’ idea right away. They asked Zhulin for a meeting.

“At the meeting, they asked to join my group,” Zhulin said. “They said they think this is the strongest training group in Russia right now. I’ve known Nikita for many years, and it happened out of stupidity that we parted ways. Maybe it was his youth or maybe it was my own explosiveness, but it was very interesting for me that Nikita and Vika and Katia (Ekaterina Bobrova) and Dima (Dmitri Soloviev) will be sparring partners all the time in practice.”

Zhulin had coached Ilinykh and Katsalapov when they won the World Junior title in 2010 with a moving program to Schindler’s List that people still talk about today, but a year later, the dancers switched coaches to Nikolai Morozov.

Zhulin was happy to welcome Sinitsina and Katsalapov. “Well, first of all seven years have passed since we separated. A lot has changed in his mind and a lot has changed also in my relationship with the athletes.”

“I always dreamed of having a strong tandem that is aiming at high placements. I like now that I see what I was expecting – they are pushing each other. I think, undoubtedly, for both teams this will mean progress,” the coach noted, referring to the competition between his two top teams Bobrova/Soloviev and Sinitsina/Katsalapov.

The newcomers felt welcomed by Bobrova and Soloviev, too.

On the ice at Olimpiiskii ice rink in Moscow, the dancers were working on their new programs, refining steps, lifts and moves under the watchful eyes of Zhulin, choreographer Sergei Petukhov and other members of the coaching staff. The atmosphere is friendly, there are smiles and laughs, but everyone is concentrating on their work. The two top teams are often together on the ice, but not always – while one takes a break or goes for off-ice training to the gym, the other couple is still on the ice and vice versa.

“We feel great here, we have a lot of ice and work and I know how Sasha (Zhulin) is working,” Katsalapov said. “I like everything here and I am very pleased that we are here now.”

“For me, it is my first experience to work with Sasha and I also like it very much,” added Sinitsina. “There is a nice atmosphere at this rink, there are good guys around. They have a massage therapist, a doctor, choreographer, everything is available on site. In the past time when we were skating at two rinks every day, we had to move around a lot.”

The team will continue to work with Tchaikovskaya, who promised to support them.

Following some disappointment in the past season, Sinitsina and Katsalapov don’t want to look back but focus on the future.

“We are just happy now to be in a new team, with new energy. We’re mounting our programs, finally,” Katsalapov said, adding that his shoulder – he underwent surgery a year ago – is not bothering him anymore.

The legendary Tatiana Tarasova said in an interview that this coaching change is the “last berth” for Katsalapov, who is regarded as very talented, yet difficult. The skaters don’t see it that way.

“We just want to settle now, to be in one place and work with our team,” Sinitsina commented.

“It is not our last chance, but as Vika said, we want to stay here and be with this team and do our job,” Katsalapov added.

The team revealed that their new free dance is set to Sergei Rachmaninov’s “Piano Concerto No. 2” and “Vocalise.”

“We really love this music,” Sinitsina chimed in.

“The music is just a sensation, it will be combined by “Vocalise,” also by Rachmaninov, and we’ll skate beautifully, sweepingly, with new elements,” her partner continued. “We all thought of the same thing, so it was a quick choice.”

At press time, the team was still experimenting with the music choices for the short dance, but they look forward to the Rhumba. Sinitsina, who has been blond the past few years, actually dyed her hair darker which will go well with the Latin rhythms she really enjoys.

“After Europeans, I wanted something new and I tried it,” she explained. “I thought there is enough time before the next competition. I was very afraid that maybe it won’t look good, but then I dyed my hair and I liked it. Now I’m thinking whether I should leave it that way or change back to blonde again.” Even coach Zhulin will be part of the decision. “Maybe it suits the program better,” Sinitsina offered.

Sinitsina and Katsalapov are planning to attend three Challenger Series events in order to gain world ranking points, but at press time, had not decided on which ones. The Russians are scheduled for the later Grand Prix events NHK Trophy and Skate America in November.

“We’re hoping for the best possible results in the first half of the season and we hope to make it to the Grand Prix Final,” Katsalapov said. “At Russian Nationals, we’re obviously aiming at the top two spots on the podium and to be on the Olympic team.”

“We want to go to the European Championships and obviously to compete for the podium there,” Sinitsina added.