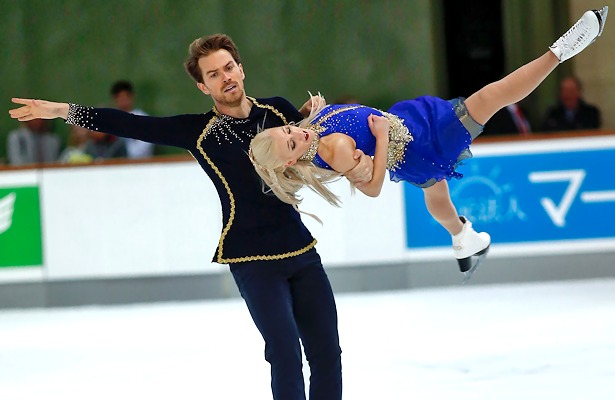 When her right kneecap shattered in a bad fall during training in June 2016, Penny Coomes was told that her competitive figure skating career was over. However, the British ice dancer and her long-time partner, Nicholas Buckland, were not ready to throw in the towel. Coomes had to go through two surgeries and long rehab and the 2014 European bronze medalists missed the entire pre-Olympic season.

Nevertheless, the team debuted the new season with a win at Nebelhorn Trophy (with nearly 18 points to spare) at the end of September and claimed an Olympic spot. Last week, Coomes and Buckland continued their successful comeback by taking gold at the Cup of Nice.

It was an emotional moment for Coomes and Buckland to be back competing for the first time since the 2016 ISU World Figure Skating Championships and Coomes shed tears of happiness in Oberstdorf.

“I just thoroughly, thoroughly enjoyed it,” said the 28-year-old. “It was so nice to get that gratification of this. It is what I have worked my bottom off so hard. So, yes, it was all worth it and it’s what I’ve been waiting for and it almost makes me appreciate these moments – they are more precious now because I almost had it taken away.”

The situation was not easy for Buckland either. “Obviously, at first it was a huge shock,” he explained. “Because of the seriousness of the injury, we didn’t know whether we would be able to continue – it was that kind of level. But as soon as Penny got her head around it, we kind of refocused. I rehabbed a bit of shoulder injury I had – it wasn’t anything serious and now that’s absolutely fine. It gave me time to work on my own skating skills.”

In the end, the skaters feel that the accident made them stronger and felt that the unfortunate injury helped them to become stronger as a pair.

“We bonded even more and we realized that, yes, this is what we both want and it made us just knuckle down for the last year and a half almost,” Buckland shared. “He got a sandbag that he would skate around with and I offered to take silly pictures of myself that he could stick on, you know, so he had Penny the Sandbag. It was a lot quieter than me actually,” Coomes added with a laugh. “Doesn’t answer back, which was very nice,” Buckland agreed with a grin.

Coomes and Buckland returned with strong material. Their short dance is set to “Rhumba d’Amour” and the Samba “Batacuda,,” which British skating legend Christopher Dean worked on with them. Dean and his partner Jayne Torvill performed a famous Rhumba program to that music at the 1994 Olympic Games that later became a pattern dance.

“It started out with something we said in jest over the phone to him (Dean),” Coomes revealed. “We were talking about different music we could skate to because we had actually worked with him for the short dance for the year before, but then I had the accident. So we knew that we wanted to work with him again and Nick said: ‘Don’t worry, we’ll just use what you did.'”

It was a joke at first, but then it came to reality. Buckland called his partner one day. “I said: ‘I know this sounds silly, but what if we actually used that piece and remixed it and brought it something modern as well?'” he recalled. They sent the Rhumba d’Amour to their music editor who worked on it and then the dancers sent the samples to Dean. He agreed right away.
“It’s a true honor for us,” said Coomes. “I know everyone in ice skating loves Torvill and Dean, but we’re British and him and Jayne are the reason why we both skated and they are a huge inspiration. We always watch their videos, so, for us, it was a massive honor for him to allow us to skate to a piece of music that is one of my favorite programs.”

“I actually had a moment where we were doing the choreography with him and he said: ‘We need something the ‘ba-ba-ba-ba-ba’ and I just started joking around and doing the back steps and he was like ‘Okay!’ and grabbed me and did it with me and I nearly started crying,” Coomes continued. “I just had to turn around and get myself together. But, it was very exciting and so much fun. It felt more like two kids at Disneyland rather than work.”

For the free dance, the multiple British Champions selected “Battle Remembered” by Yo Yo Ma and The Silk Road Ensemble.

“It’s an eclectic mix of all sorts of different ethnic styles, instruments,” explained Buckland. “The Silk Road itself starts in China and finishes throughout Europe and it’s a winding road that involves a full different mix of cultures and feelings and I think that is what our free dance represents. The piece has all those different types of instruments throughout and that’s what we try and portray.

“It’s a great single piece,” he continued. “It’s got lot of variety. It starts off, it builds, it ends nicely and it just gave us plenty of opportunity to use the musical highlights. We came off with a full new set of lifts for this program. All new elements for us. So we just put it all together and we’re really proud of this free dance this season.”

Coomes and Buckland were excited about getting good scores and levels in their first international event since Worlds in 2016. They felt in part that it is important that the comeback shows they have improved despite what they had been through.

“Both of us said to each other: ‘If we come back and it’s not quite the same or doesn’t feel like we can be competitive, then it’s not worth doing’ because we have dedicated our whole lives to it and. I think the fact that we’ve posted a score that is competitive really shows us that we have improved as well,” Buckland pointed out.

Although they were a bit nervous, the dancers also oozed confidence at their recent events.

“I think you have to trust in the process,” noted Coomes. “For me, we’ve worked so hard for over a year and it all came together and you never know whether that is going to happen or not, but I think you have to trust the training. Our training has gone very well and we are very confident and happy with both our programs and our material, so I think if you go out there, and you know, that you are confident in what you have, then it really helps. If you are going into a competition thinking the training has not gone well, then you might feel a bit differently.”

The two-time Olympians still feel they can perform better than they have, however, the main focus in Oberstdorf was on securing that Olympic spot, which they did easily.

“For us, the goal was, whether you like it or not, Olympic qualification. That was the most important thing for us and we did that,” said Buckland.

While sitting in the press conference and trying to comment, Coomes was suddenly overwhelmed by emotions and broke into tears. “This moment means so much to us both and I couldn’t have done it without my amazing physio team and my supportive coaching team, UK support, National Lottery. I just feel so grateful. Sorry I was very emotional before. Some of my friends are qualifying, so I just have to try to stay focused and just really focus on the moment, get it done and then I can do this afterwards. So I am very, very grateful.”

The veteran ice skaters are now preparing for their third Olympic Games.

“The Olympic experience is indescribable,” said Coomes. “I have dreamed of going since I was a little girl. I remember watching the Opening Ceremonies each time and thinking ‘I just want to be there.’ To actually go is something else.”

“The first Olympic Games in Vancouver, I think we were both just really young and wide-eyed and just took everything in,” Coomes elaborated. “Then the second one was little bit more serious with the skating. We have grown up with the Olympic Games. Each year, we’ve learned to control our nerves going into competition and being really versatile and resilient is something we have learned over the years, as well. Nothing ever runs smoothly, so we’ve definitely learned to deal with all the “crazy” that comes our way, but we’ve come out stronger.”

“For this Olympic Games, first and foremost, we just want to make it there and be healthy,” Coomes summed up. “I have dreamed of an Olympic medal my whole life and I know that we are the dark sheep. We’re not perhaps the ones you would consider medal contenders, but we have worked so hard to be here and I’ve not worked this hard to come back and not do as well you possibly can. So, that’s our goal, to just go out there and really surprise people and perhaps just do it for ourselves and just wear those five rings with pride.”

“I think you don’t realize how special an Olympics is to you until it is almost taken away,” Buckland added. “I think the last year has really taught us that because you’ve got to look at the end goal. We’ve got each other, we’ve learned resilience, and we’ve learned, essentially, what this really means to us.”

Currently, Coomes and Buckland have not yet been assigned to a Grand Prix event, but hope to get one as a substitute in case another teams drops out.