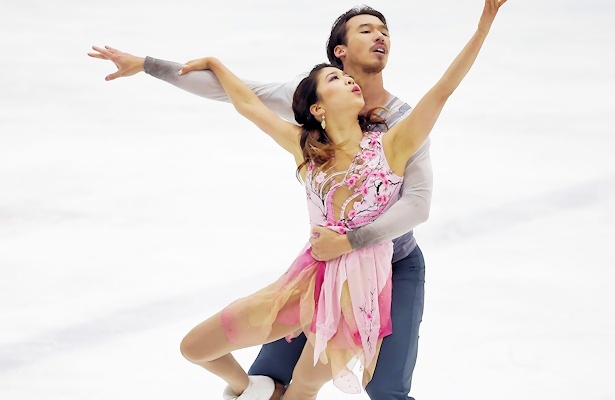 Cherry blossom is an iconic flower in Japan, and therefore, the ice dance team of Kana Muramoto and Chris Reed felt it would be a perfect way to portray their skating journey. The time of the cherry blossom in April is very special and meaningful for the Japanese people. Everybody swarms out into the parks and gardens to enjoy the beauty of the white or pink blossoms, and the “cherry blossom” radar on the internet informs people where the best trees can be found.

The skaters chose “The Last Emperor” and “Merry Christmas Mr. Lawrence” as music for their free dance, and both pieces were composed by Japanese composer Ryuichi Sakamoto.

“Sakura or cherry blossom is one of the most iconic things in Japan,” Reed explained. “It’s beautiful, but yet it is short-lived. It’s magical from the start when it blooms. With our program, we wanted to depict that from the moment, when it is winter, and the flowers are trying to bloom, but it is not ready yet until the middle part where it is experiencing its breath for the first time, the beauty and full bloom, where it is just happiness, joy and beauty, until the petals fall away.”

“When the flowers start blooming it also has the meaning of a new life, a new year,” added Muramoto. “Because we had a kind of a down season last season, we wanted to re-create ourselves and start the new season with a new mindset.”

The ice dancers indeed had a good start into this important season. Since they placed 23rd at the past World Championships, the Japanese Champions did not qualify a spot for the Olympic Games and had to compete at Nebelhorn Trophy in Oberstdorf in September. There, they finished second and easily earned one of the six spots that were available.

The team, which has been skating together since 2015, placed ninth in their first Grand Prix at NHK Trophy in Osaka, Japan, and seventh in their second event at Bridgestone Skate America in Lake Placid, New York — both times with solid performances.

“It was really great to skate again in Japan, especially in Osaka which is Kana’s home town,” Reed shared. “NHK is always a great Grand Prix to skate in. Every other team has always discussed about how they would love to go to NHK.”

“We got some feedback which we needed to address in a very short amount of time to come into Skate America,” he continued. “We worked really hard on that in less than a week in order to try to revamp, especially the footwork elements, in order for it to be where it needs to be.”

“We tried to think of how we could get more GOEs for the lifts and stuff, and then we kind of worked on that, added 24-year-old Muramoto. “Then, at NHK, it was obvious that we got more GOEs, so that was good that we made that change. It was a good competition for us, because last year we had to withdraw (due to Reed’s injury).”

However, qualifying for the Olympic Games was the biggest step for the students of Marina Zueva, Oleg Epstein, Massimo Scali and Johnny Johns. It was definitely a boost for their confidence that they had the potential of competing with the top teams.

“Right now, honestly, I still don’t feel that much the “wow factor” because it is still not official yet that we are going to the Olympics,” said Muramoto. “It will be after Nationals, so we are not viewing it yet as official, but it was still amazing to qualify a spot for Japan.”

Reed agreed: “We definitely know where we are and where we can be. We always have higher goals in mind in order to achieve where we want to be.”

This will be Reed’s third outing at the Olympic Games. The 28-year-old competed with his sister, Cathy, internationally from 2006 until her retirement in 2015. Muramoto was a single skater until 2014, when she switched to ice dance, first with Hiroichi Noguchi, then with Reed.

“Before I changed to ice dance, I didn’t find myself loving skating anymore because all the other young skaters in Japan were doing triple-triples,” Muramoto recalled. “I had my triples, but I was not motivated at all. Once I started ice dancing, it was like a whole new life and I love skating right now. I just like to be on the ice which I kind of never felt the same way when I was a single skater. It’s awesome that I have a nice dancing career now and it’s really fun.”

The dancers get along very well. Muramoto describes her partner as “loves to make jokes so: funny. Humble. Likes to make people laugh – brings a good mood” while he describes her as “hard-working, calm and energetic.”

However, the team did have their ups and downs, mainly due to injuries. After last season, it was a bit a downhill slope for them which prohibited them from training to the degree they wanted. As a result, the dancers and their coaches adjusted the training and their schedule.

“Now, every time we are on the ice, it is not: ‘Can we survive the training week?’ but ‘What can we do to get ourselves better?’ said Reed. “With that approach, I think it helped us become a stronger team and it gave us a strong start to the season.”

The main change is that the dancers focus on one day in the week on skating skills instead of doing programs. While low impact, it helps them work on the basics.

“We are always so focused on what elements we’re doing right now at this moment,” shared Reed. “So, with these skating skill days that we have, it helps us to up our program component levels.”

Muramoto also feels that they benefit a lot from working on their skating skills and that they still must catch up in this aspect. When they teamed up, they didn’t have enough time to train basics.

“I was kind of still new,” she pointed out. “So, more than doing basic skating exercises, we made our program and were just working on programs and didn’t have that much time to delve into the skating skills aspect.”

The dancers enjoy training in Marina Zueva’s big training group in Canton, Michigan. The feel the great thing about the school is that the environment and atmosphere is always positive.

“The coaches are always talking in a very positive manner,” said Reed. “There is no negativity involved and everyone that’s there always works hard. They work to the extent of where they want to be and we all feel that motivation to get better.”

“It’s like we are one big family,” added Muramoto. “What I really like about all the coaches there: it’s not just that they teach us about skating, but they also teach us about life in general. Like how to deal with pressure. Every day I learn something new from Marina (Zueva) and she’s so funny and really cute. So the atmosphere is really uplifting. I’m excited to go to the rink every day and to see what I learn.”

While Reed, whose mother is Japanese and his father American, was born and raised in the USA, Muramoto moved to North America only when she switched to ice dance. Prior to that, she spent a year in Vancouver. She adapted quickly, especially since she already spoke good English. However, there are things she misses from Japan.

“My dog. I have a white German Shepherd, she’s really cute,” shared Muramoto. “Then there’s the food, my Mum’s cooking – Japanese food is really good. In Japan, it’s easy to travel, there’s a lot of public transportation. In the States, you have to drive. I like driving, but in the winter, it’s so scary to drive in Michigan because of the snow.”

Muramoto and Reed are not yet sure about their plans after the Olympic season.

“I think right now we have always been discussing about this season because we don’t want to distract our minds from what’s coming up ahead at this moment,” said Reed. “Once the season comes to an end, I think we’ll know what we want.”

Reed, who dealt with numerous injuries over the years, feels that his health is much better now and is enjoying his time on the ice with “no braces or support whatsoever.” However, “there’s always maintenance involved” as he put it.

Off the ice, Reed enjoys cooking – Japanese, American or Italian dishes – and likes to look for new recipes on the internet, while Muramoto likes “girly stuff.” “I do nails,” she said. “I like to do the coloring book – it just takes me out of all the world and I do a lot of that.”

For the time after their competitive career, both dancers would like to stay involved in skating and both can see themselves coaching and hope to give back and help to develop ice dance in Japan.