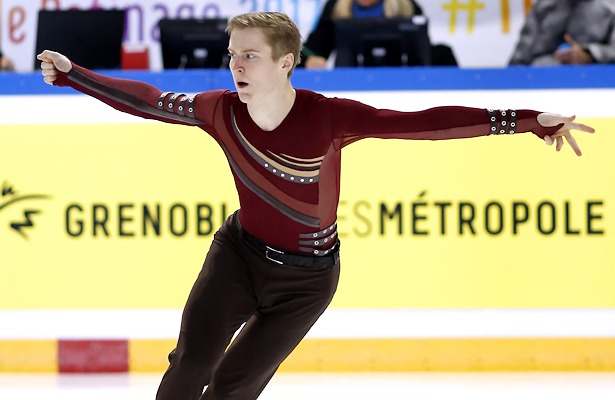 Russia’s Alexander Samarin claimed a bronze medal in what was his debut on the senior Grand Prix at Skate Canada International in Regina, and finished fourth in his second event at Internationaux de France in Grenoble. The Muscovite is one of the candidates for the Russian Olympic team.

While the Russian men are slowly catching up with the Russian ladies, they are not yet near as successful. However, who would have thought that in the Grand Prix series in the Olympic season, a Russian man would be on the podium in five out of six events? Mikhail Kolyada and Sergei Voronov even won an event each and took bronze in the other.

However, things didn’t look so great for the 2017 World Junior bronze medalist a few months ago during the off-season. Handicapped by an injury to his right foot, Samarin was off the ice for about four months and returned to full training beginning of September, only one week before the test skates of the Russian team.

“I came to our training camp in Italy with new, custom-made boots and after a few practice sessions, my foot started to swell up and I could not skate,” the Muscovite recalled.

The skater changed out his boots, but the pain did not go away, and he soon realized that the boots were not the problem. He was still perplexed.

“I had treatment for three months with mixed results,” Samarin revealed. “It became better, then it was the same again. The doctors gave me different diagnoses, but nobody really could say what is was. Now it is all back to normal again.”

The ISU Junior Grand Prix Final silver medalist did the first full run-throughs of his new program only at the test skates in Sochi during the first week of September. After that, he competed at Nepela Trophy in Bratislava, where he finished fifth.

“The result was not the best, because there was just not enough time,” Samarin pointed out.

Then things improved. At a national competition in Yoshkar-Ola in mid-October, Samarin landed his first quadruple Lutz in competition, joining an exclusive club of skaters such as China’s Boyang Jin and USA’s Nathan Chen. At Skate Canada and Internationaux de France, he again pulled off the quad Lutz.

“I overcame the mental barrier with the Lutz in Yoshkar-Ola,” the Russian silver medalist explained. “When I landed it in Canada, I did it for the first time with positives GOEs in the free skating. Each time, I get more confident about that element, like with the quad toe. Now I feel calmer about the quad toe than I used to. As for the Lutz, yes, I still need to work on it, but I was able to overcome a certain barrier and now I need to do this jump in competition with more confidence.”

While Samarin gets a lot of technical points, he knows that he still needs to improve the components side.

“I need to continue to work on the second mark. If I was able to skate like I can in practice, I could have competed for second place (at Skate Canada), even though it was my Grand Prix debut,” the teenager said. He feels that he still lacks experience at the senior level and feels a certain pressure. “With time, this will go away. It is already getting better compared to the past seasons. I think the progress is evident.”

Samarin trains in the CSKA Moscow club since childhood and has been coached by Svetlana Sokolovskaya since March 2014.

“Sasha is very reserved, not talkative, but he has a fine sense of humor,” the coach said about her top student. “But when he opens up and accepts people and then there is always laughing around him. He likes to joke. He is very loyal, if you believe in him.”

Sokolovskaya feels that Samarin’s distinct sense of responsibility prevents him from opening up. She describes his strength as “hard-working, hard-working and hard-working” and his weakness as being “very modest and shy.”

Sokolovskaya says that working with Samarin is easy and difficult at the same time.

“He works hard, and with his hard-working nature, he develops his talent,” said the coach. “There are people that are naturally talented, but Sasha proves that through work, anything is possible. If I set a technical goal for him, he will go for it together with me and he always believes me, even if at the beginning it seems like it (the goal) is impossible (to achieve).”

As is the routine, Samarin chose his programs with coach Sokolovskaya and choreographers Irina Tagaeva and Peter Tchernyshev. The short program is set to Beethoven’s “Moonlight Sonata” in a modern arrangement.

“We had several choices, but we decided to try something new – a classical piece, but in a different version,” Samarin explained. “When I hear the first accords of the music, it calms me down. I feel that I can skate with confidence and I don’t have to chase after the music.”

Tchernyshev suggested the music for the long program, which mainly consists of “House of the Rising Sun,” with lyrics.

“It is an unusual music and I didn’t hear this version before,” Samarin shared. “The three parts of the free program go well together – the first part evokes inner confidence, the middle part is calm and beautiful, at least to me, and the third part is very powerful. I really like my programs and the character I am portraying. Now I just have to be able to transmit it fully to the audience.”

At the Grand Prix in France, the short program went well, but there were some mistakes in the long and Samarin slipped from third to fourth.

“Maybe I was over-excited. It was, after all, a new experience for me,” the Russian noted. “Each competition is something new for me. The schedule was not comfortable. It was late and at home we would sleep at this time. But you still have to do your job. This is not an excuse. It is upsetting that I didn’t do what I can do usually with my eyes closed. When I am able to relax and get a kick out of my long program, it will look completely different. The music is very powerful, but this time the music was stronger than me. We’ll continue to work and fix the issues before Russian Nationals. I will fight for making the Olympic team.”

At Shanghai Trophy, the week after Grenoble, he tried two quad Lutzes for the first time in the free and landed a clean quad Lutz-triple toe while he stumbled out of the second quad Lutz.

“We have to polish the second part of the free skating,” Sokolovskaya said. “In the first half, we tried quad Lutz-triple toe, quad Lutz and quad toe in Shanghai. Now we are working on the technique in the second half, and obviously we’ll put in maximum work for the second mark, the presentation. If he skates the program without difficult elements, then he shows really a lot of progress (in the presentation).”

Samarin wants to up the ante for Nationals that will take place during Christmas time in St. Petersburg, Russia, which is very important for the selection of the Olympic team. Russia has two spots for the men.

“My bronze medal from the Canadian Grand Prix event gives me confidence that I can do my job,” said Samarin. “However, the battle at Russian nationals will not be a joke; there, it is not important where you had what placement (in other events). At Russian nationals, everything will depend on yourself.”

“I believe in Alexander infinitely and I want that everyone believes in him – all fans and non-fans of men’s singe skating,” Sokolovskaya said.